With changes in learning, administrators, counselors watching for anxiety, depression 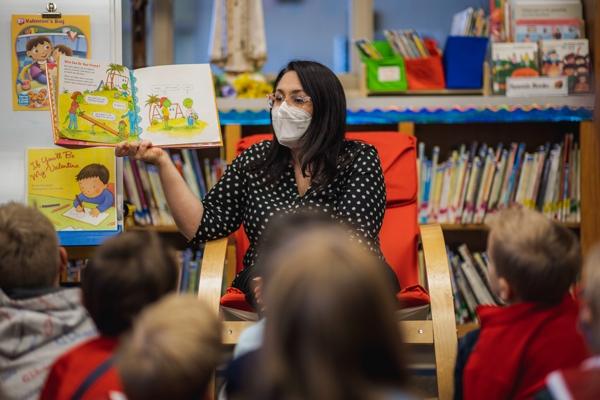 Travis McAfee
Counselor Suzanne Krumpelman reads to first graders at St. Joseph School in Fayetteville about friendship. She said, "Every child has been impacted by this pandemic in one way or another.”

Travis McAfee
Counselor Suzanne Krumpelman reads to first graders at St. Joseph School in Fayetteville about friendship. She said, "Every child has been impacted by this pandemic in one way or another.”

Off and on, since the COVID-19 pandemic began and in-person instruction resumed, St. Joseph School counselor Suzanne Krumpelman in Fayetteville has spoken to students to gauge how the students are coping.

During one informal survey, Krumpelman asked how many students know someone who has died from COVID-19 or become gravely ill.

“Almost every single one of the kids raised their hand,” she said. “And you know we just don’t think about it. There are kids who lost grandparents, uncles, cousins, friends who were significant in their life. They are dealing with a lot of other difficult things … Every child has been impacted by this pandemic in one way or another.”

On Dec. 7, U.S. Surgeon General Dr. Vivek Murthy issued a grim advisory regarding the mental health of youth. While there was a mental health crisis among children before the COVID-19 pandemic shut down the world, with one in five children between 3 and 17 having a mental, developmental, emotional or behavioral disorder, the isolation, fear and uncertainty have magnified the problem.

"There are kids who lost grandparents, uncles, cousins, friends who were significant in their life. They are dealing with a lot of other difficult things....Every child has been impacted by this pandemic in one way or another.”

“I think that’s where we all want people to be — ‘The kids are great, they are fine.’ They probably seem that way, but they are not. You have to dig a little deeper,” Krumpelman said.

Surviving in the moment

According to a September report from the Children’s Hospital Association, there was a 45 percent higher rate of reported self-injury and suicide cases in children 5 to 17 in the first half of 2021 than in the same period in 2019. There was also a 14-percent increase in the first two quarters of 2021 compared to 2019  in mental health emergencies for 5 to 17-year-olds.

Krumpelman, who has a master’s degree in clinical and school counseling, has worked in public and Catholic schools for about 10 years.

“I think for sure parents need to be keeping an eye on their kids. The stress level is very, very high for kids right now. One of the things we’re seeing all across the board — and I’ve talked to my friends in the public school district — anxiety, depression. I have had to work with more kids than I ever had in two years that are having panic attacks for the first time,” Krumpelman said. “Children, they just kind of survive the moment and go along with the moment, and it takes a little bit of time for the after-effects to happen.”

While adults may have processed why quarantining was necessary, younger children may not have. Suddenly, they were not allowed to see friends, go to school, church or anywhere for fear of catching a potentially deadly virus, along with wearing masks and other safety precautions. There was no longer a routine.

Pastor Msgr. Jack Harris, a trained crisis counselor, said the biggest threat to mental health he’s seen in his students at Sacred Heart School in Morrilton is isolation and loneliness stemming from virtual learning and quarantining.

“School is a traumatic thing, to begin with; it’s hard. It really is, the demands, the requirements are hard to meet, if you are having trouble with that, it’s a trauma … These things can really create difficulty. Add that to trying to handle that on your own or virtually,” he said.

The Centers for Disease Control and Prevention characterize anxiety in children as not outgrowing certain fears or worries or when those worries “interfere with school, home or play activities.” Persistent feelings of sadness or hopelessness can indicate depression. Other indicators include not wanting to do fun activities, changes in eating or sleep patterns, energy level changes from tired to restless, difficulty paying attention, feelings of guilt, uselessness or worthlessness and self-injury or self-destructive behaviors.

Krumpelman said there are some signs that may not be as obvious to determine if a child is suffering from anxiety, depending on their age.

“The little ones, a lot of times they are just really active, sometimes it looks like ADHD. They are quick to get angry; they are irritable,” she said.

Other signs for younger children could be a hard time concentrating, dreams or nightmares, wanting to sleep with their parents at night, being clingy, overreacting or obsessively crying over things, stomach aches and frequent trips to the school nurse.

“Just needing to go to the bathroom a lot in class. That’s their way of getting out of a situation” that might be making them anxious, Krumpelman said.

Older children and teenagers may also experience those things, but older ones typically exhibit constant worrying and extremes — sleeping too much or too little, trouble concentrating, spending too much time with others or always wanting to be alone and fighting about things they haven’t before.

“‘What if this happens, what if that happens.’ They might start worrying about their family, mom or dad out in the (bad) weather that wouldn’t be a huge concern for them and all of the sudden they’re worried about things like that,” Krumpelman said.

Being overly critical of themselves, saying things like “Oh, I can’t do anything right, nobody likes me” can be an indicator, she added.

Though each child is different, in her experience, Krumpelman said boys do not tend to talk about their feelings but act out more with negative behaviors.

“Girls will tell you a little bit more. But this is not something kids can put into words,” she said.

Talk to your kids

Krumpelman suggests parents try to talk to their children, but they may not be open to sharing. At that point, reach out to teachers or other adults in their life to see if they have noticed changes. If a pattern of behavior continues for weeks or things get worse, especially with self-harm or talk of suicide, a counselor needs to get involved.

Since her sophomore year, Charleston High School senior Madeline Kennedy, 17, struggled with bulimia in secret. At school, she had fewer opportunities to eat and immediately throw up. But during virtual learning, she was vomiting almost three times a day, struggling to get out of bed from lack of nourishment.

“I was really anxious about losing all this weight … I was worried about my family during the pandemic and isolated from all my friends … I was very alone during all of that,” said Kennedy, whose family attends Sacred Heart Church in Charleston.

In July 2020, she told her parents, William and Karla Kennedy, what was going on.

“Obviously, it’s something no parent wants to hear that your kid is struggling with that, especially the bulimia because that can be so hazardous to your health,” William Kennedy said. “Our biggest concern was she needs help with this, and who can do it the best?”

Madeline had seen a counselor since she was diagnosed with ADHD as a preschooler. But her father said, given the pandemic, it’s not surprising that her issues worsened.

“Personally, I feel the kids have been the biggest victims of this whole thing, especially with the shutdown,” he said.

Madeline, who was diagnosed with anxiety and depression, now regularly sees a counselor.

William Kennedy said it’s important for parents to check on their kids and dig a little deeper if they say their day “wasn’t that great.”

“Take everything slowly because if your child or you are going through that, it’s tough, especially if it’s an eating disorder or some type of habit. You can’t expect results immediately after you ask for help or send your child to therapy. You have to give it time. It will work,” Madeline said. From a pastoral standpoint, it’s about being present. Msgr. Harris greets students as they arrive at school, asking about a canceled game or activity, a hard test or any challenge they might be facing.

“Being out there and doing that is very important. That kind of an informal being on their turf, showing up there when you can be somewhere else, but you’re not,” he said.

Schools can also provide resources to parents. In the fall of 2021, Our Lady of the Holy Souls School in Little Rock hosted a two-night viewing of the 2017 documentary “Angst” about anxiety and a panel discussion. The school has seen “heightened levels of kids that are talking about self-harm” and struggles going back to campus after virtual learning, said principal Amber Bagby.

“I just feel like trauma is trauma no matter where you are. It definitely presents itself differently than some of the public schools I was in, but the feelings are all the same,” Bagby said. “There’s a misconception I think a lot of people have with our private schools that our babies are free of some of that stuff.”

Krumpelman said kids should have downtime, prioritizing one or two activities versus a full schedule of extracurriculars. Often, she finds students are shocked to learn others carry the same burdens.

“I think we’re up against a little bit of that stigma of ‘I’m having anxiety or a panic attack, I must be the only person.’ It’s important for kids to know, no, everyone is suffering right now,” Krumpelman said.

Deacon Mark Verkamp has a strong bond with St. Joseph