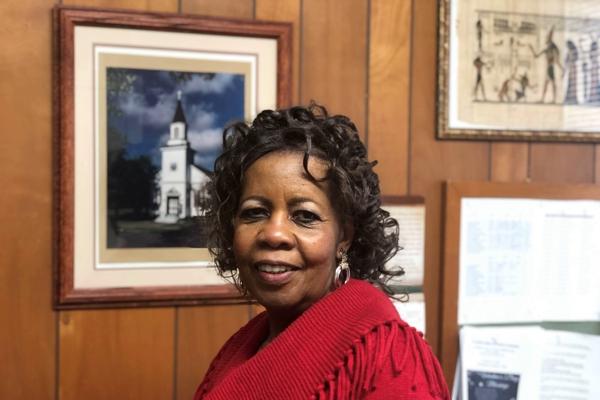 Chris Price
Alma Stewart stands in her office at the rectory at St. Bartholomew Church in Little Rock Feb. 16.

Chris Price
Alma Stewart stands in her office at the rectory at St. Bartholomew Church in Little Rock Feb. 16.

Family: Two sons, Christopher (who died March 2015) and Curtis, 39; and one granddaughter, Morgan, 3

Why You Want to Know Alma: Alma Stewart is the kind of parishioner every pastor wishes they had in their church. She grew up in a Baptist family on a farm in Monroe (Monroe County). After graduating from Arkansas Agricultural, Mechanical & Normal College (now the University of Arkansas at Pine Bluff) in 1972, she moved to Little Rock. She joined St. Bartholomew Church in 1976 and has since served in several ministries, including the parish council, RCIA team, finance council, Eucharistic ministry, altar society, choir, Diocesan Council for Black Catholics (DCBC), the Diocesan Pastoral Council and the Knights of Peter Claver Ladies Auxiliary. In 2015 she won the DCBC’s Daniel Rudd Award. Today, the retiree from Levi Strauss & Co. and the Center for Healing Hearts and Spirits, is a volunteer bookkeeper at St. Bartholomew.

Being able to praise God. Just being able to thank him for all that he's done for me, to be able to come to my church and enjoy the Mass celebration.

Your involvement in the Church is extraordinary. Have you always been so involved?

I was a convert. I came into the Church around 1976, so I’ve been here for 45 years. I was raised Baptist and was baptized when I was around 12 years old. My mother, she was a praying woman. She took us to church every Sunday, and we stayed all day. My father was always teaching us to be prepared for life, to depend on yourself to make it in life and not depend on anybody else. My grandfather, he always wanted me to stay in church. He didn't tell me what faith I had to be. He just wanted me in church.

Did you experience racism growing up?

I attended school in Clarendon and had to ride the bus from Monroe to get there. This was during the time of segregation. At the beginning of one school year, my sister and I were waiting on our bus, which was the “Black” bus. When the bus came, there was a white driver that said we had to ride his bus because they were no longer sending us a bus. No one told us anything about it. We got on and the white children — I don’t know what they thought we were going to do to them, turn them Black or what — they ran to the back of the bus like we had the plague. The next day, my daddy didn’t let us ride that bus. I’m sure he had gotten some flak about us. So he drove us to a friend’s house for us to catch the “Black” bus until we graduated. We never rode the white bus. Our parents stayed on their knees to protect us. We had no idea what danger we were in during those days. I guess it was good that we didn’t know. We didn’t have a clue.

How would you describe the state of the Church for Black Catholics in Arkansas?

Number one, it is small. It’s a dying church. If you don't have people that are having children to retain the general numbers, it’s difficult. If they leave, they don’t often come back. They find more fruit somewhere else or just stay home. I tell our people that we need more evangelizing in our Church. We need to reach out and bring in somebody who will motivate our people. They need some motivation, you know? Just doing the same old thing isn’t working. Our Church has often been silent. We need to involve ourselves in what’s going on in the community. And we’re not doing it. We all need to be missionaries. Most people just go to church for an hour and that’s it. They don't give God the time that he deserves from us and work to evangelize and be with the people.