Three-year initiative aimed at rejuvenating belief in, understanding of the Eucharist 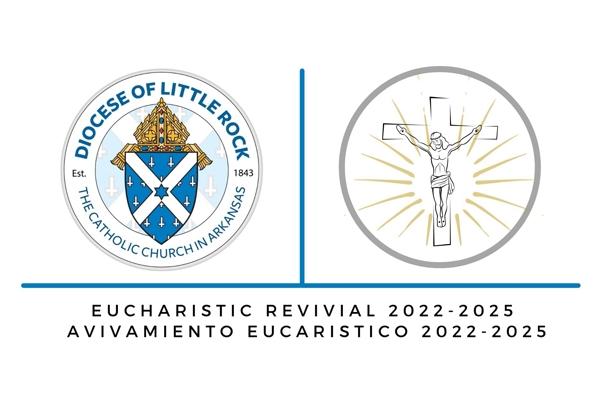 To instill a rejuvenated belief and understanding of the Eucharist, the United States Conference of Catholic Bishops has instituted a three-year Eucharistic Revival, kicking off in the Diocese of Little Rock June 18 on the solemnity of Corpus Christi.

It will culminate with a National Eucharistic Congress in 2024, followed by a year of mission.

Bishop Anthony B. Taylor shared news of the revival with Serra Club members Feb. 11, explaining it was partly in response to declining belief in the Real Presence, with a 2019 Pew Research Center survey stating only 31 percent of Catholics believe the Eucharist is the Body and Blood of Christ. The revival also considered declining Mass attendance following the worst of the COVID-19 pandemic.

The theme is John 6:51: “I am the living bread that came down from heaven; whoever eats this bread will live forever; and the bread that I will give is my flesh for the life of the world.”

Father Juan Guido, pastor of Christ the King Church in Fort Smith and diocesan director of the Divine Worship Office, was chosen by Bishop Taylor as chairperson of the revival’s committee.

The U.S. bishops published a theological document “The Mystery of the Eucharist in the Life of the Church,” in November that focuses on three key areas: kerygma (the proclamation of Jesus’ death and resurrection and understanding the union of Christ’s sacrifice in the Eucharist), liturgy and diakonia (service). These three areas encourage a person to examine their conscience and make sure they are “properly disposed to receive Communion,” moving hearts back to reverence in preparing for the Eucharistic celebration of the Mass and devotion to the Eucharist outside of Mass and recognizing how the Eucharist should shape the way the faithful live and serve others.

The revival will begin with two Masses Saturday, June 18 celebrated by diocesan vicar general Father John Connell at St. Vincent de Paul Church in Rogers at 5 p.m. and by Bishop Taylor at the Cathedral of St. Andrew in Little Rock at 4:30 p.m.

Resources for the revival are available from the USCCB. Father Guido hopes priests will make videos and share homilies on the Eucharist. The revival also will include social media outreach and possibly diocesan conferences in both English and Spanish.

“I want to use our own resources. I think we have wonderful priests that have a talent for teaching,” Father Guido said. “It’ll be wonderful to have our own priests express their love for the Eucharist and pick a topic on one of the core teachings of the Eucharist.”

The diocesan phase will last from 2022-2023. The parish phase, 2023-2024, will encourage Eucharistic devotions, having adoration at least once a week or considering establishing perpetual adoration and inviting people back to Mass.

“The pandemic has left us kind of ‘Well, it’s easy to watch it on TV.’ It’s not the same,” Father Guido said of virtual Masses. “We have to have that personal encounter with the Lord.”

The revival will end with the National Eucharistic Congress in Indianapolis, July 17-24, 2024. The congress hopes to “form and send forth more than 80,000 Eucharistic missionaries,” according to a news release. The three-year process will conclude on Pentecost June 8, 2025.

Father Guido said every Catholic in Arkansas can prepare their hearts by spending time with the Lord during a holy hour.

“Get close to the Lord in the Eucharist with adoration, go early to Mass, spend time in silence in front of the tabernacle,” he said.

More resources are available at dolr.org/eucharistic-revival.

Click for the Lent 2022: The Real Presence of Christ in the Eucharist index