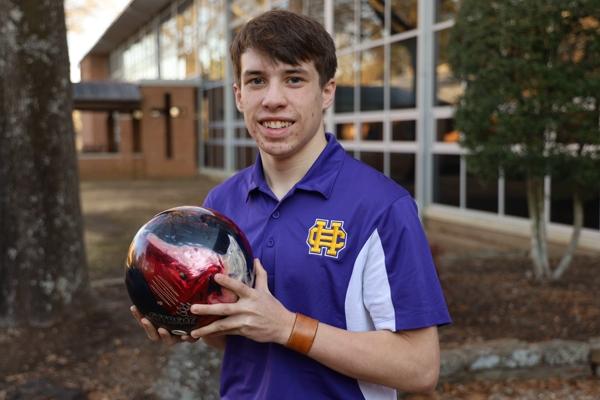 One game into the three-game series of the Arkansas 6A state bowling tournament, Ian Draeger wasn’t totally feeling it. The junior Rocket and undisputed leader of the Catholic High bowling team wasn’t stinking up the joint, rolling a 214 in Game One, but he didn’t feel comfortable, either.

“At the end of that first game, I started feeling a little unsure,” he said. “My ball reaction wasn’t looking the way I wanted it to. My dad, who is like my personal coach and he’s basically the assistant coach for Mount and Catholic as well, suggested making a ball change. So I made a ball change in the last frame of the first game and got a motion I liked a little better.”

It’s often said in sports that it’s a game of inches and in this case, the slight adjustment not only propelled Draeger to individual honors at the state meet, it was the catalyst for one of the most memorable single games in the program’s short history.

From the opening frame in Game Two, when he obliterated a strike, Draeger was in a groove that most bowlers only dream of.

“The very last shot, I was shaking so much. My arms were shaking, my legs were shaking. My mind was kind of going crazy,” he said. “Everybody was watching me, so a lot of peer pressure. My main thought going through my mind, ‘Keep it on the lane and try to hit your mark if you can.’”

“In the second game I was like, ‘OK, just try to score better than the first,’” he said. “I started striking a little bit. By the time the fifth frame rolled around and I struck that round, I tried as little as possible to look at the scoreboard.”

Had he glanced up then — or at any time during the course of the game — Draeger would have seen what the rest of the competitors and onlookers were witnessing with mouths agape. Across his scoresheet were only X’s, which in bowling scoring denotes a strike. To roll 12 straight strikes (in the 10th and last frame, a bowler rolls up to three balls) scores 300 pins, a perfect game.

Draeger had been here before, having rolled a 300 in practice last year leading up to the conference meet. But he’d never shot one in competition, let alone the ultimate meet of the year. With each strike the pressure only mounted, and the usually demonstrative junior fought to remain calm.

“The only person that I talked to was my dad for advice,” he said. “I did a lot of deep breathing. Did I avoid everybody else? Kind of. Every time I struck, I’d turn around, and I’d see my teammates clapping and I would kind of take a deep breath and walk by, but I made sure they knew I saw their support.”

The curiosity of the 17-year-old's predicament is that for all his success on the lanes, it’s a story that almost never happened. Despite coming from a family where dad Justin, mom Paula and his sister Haley all bowled, Ian hated the game as a kid. Had he not happened to see a video of a professional a few years back, he might still hate it.

“The style that I bowl in, I bowl two-handed,” he said. “We were watching professional bowling one day and saw Jason Belmonte, who’s a professional, probably the best in the world. I saw him bowl and he did this two-handed style, and I was like, ‘You know what? I’m going to try that.’

“So, the next time I went bowling I tried it, and I just started doing it. I liked it and got into bowling.”

Draeger’s technique may have been unorthodox, but it worked, and upon arriving at Catholic High from Immaculate Conception School in North Little Rock where he attended junior high, he immediately signed up for the bowling team. He bowled like a freshman in his first season, then improved greatly for his sophomore campaign, qualifying for state. The accomplishment was doubly impressive considering he was the school’s lone prophet for the sport.

“Sophomore year, Catholic High did not have a team, but I was able to bowl individually for Catholic High,” he said. “At conference, I placed third. At state I did really bad. I placed in the 50s somewhere.”

Draeger entered junior year determined on two things — to improve his showing at state and to land a coach and build an actual team. Kim Dodge, a CHS teacher whose son was an incoming freshman bowler, wandered into his crosshairs.

With a team and sponsor secured, Draeger could focus on competition. He took home conference gold and led the team to state where after one game he found himself in a dogfight for individual honors. Now here in Game Two he’d shot perfectly headed into the seventh frame.

“The seventh frame I had a somewhat decent shot that almost left a 7-10 split,” he said. “Another pin that I knocked over came flying over and knocked over the 10 pin. Then I had a late tap on the seven for my seventh-frame strike. We called it divine intervention because my priest from St. Anne’s, (pastor) Father Alejandro Puello was there.”

Draeger’s score was still perfect through two balls of the three-ball 10th frame, but his composure facing that final shot was anything but.

“The very last shot, I was shaking so much. My arms were shaking, my legs were shaking. My mind was kind of going crazy,” he said. “Everybody was watching me, so a lot of peer pressure. My main thought going through my mind, ‘Keep it on the lane and try to hit your mark if you can.’”

After the ball left his hand, the crowd shouted it all the way down the lane. Later, Draeger confessed he didn’t think the ball was a strike, but the full-throated onlookers were convinced otherwise.

“I thought it was there,” said Dodge, who was so nervous she accidentally stopped recording a video of the final ball on her phone. “It looked golden.”

In a blink the pins exploded, tumbling and scattering, save for the resolute 10 standing steady in the back right-hand corner. The crowd took the bid for perfection coming up short worse than Draeger did.

“My personal reaction was a lot of relief,” he said. “I got a lot of questions of was I mad that I didn’t shoot a 300? Not really. I was just relieved in the moment.”

Barring a complete collapse in Game Three, Draeger’s individual state title (not to mention All State designation) was all but a foregone conclusion. Rolling a pedestrian 186, the title was his as well as a rosy outlook on next year.

“The team next year looks exactly how it does this year,” he said. “We only lost one senior and everyone else is coming back. We worked the open house a few weeks ago, and we had a decent turnout, had a few people come to the table. So, I’m hoping to see some new people try out next year and maybe have some other faces on the team.”