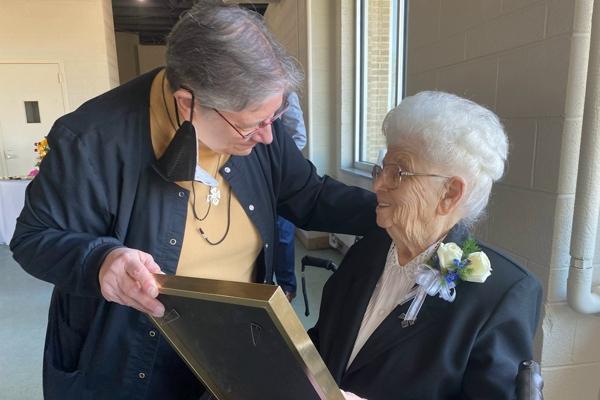 For 100 years Sister Pierre Vorster has been immersed in a Benedictine life.

The sister from St. Scholastica Monastery in Fort Smith grew up in the shadow of Subiaco Abbey, was taught by Benedictine sisters and joined the convent in 1941 when she was 19 years old.

She celebrated her 100th birthday March 19 at the Trinity Center with more than 100 friends, family members and former students. Among the tributes she received were proclamations from the Arkansas House of Representatives and the City of Fort Smith and an apostolic blessing from Pope Francis.

“Who would have thought I’d live this long?” Sister Pierre said. “The Lord has walked with me, and I put a little effort into it, I guess. And I did hard work all my life.”

“I grew up as a Benedictine, attending Mass at the abbey church and waking up to the sound of church bells each morning. We were a very Catholic family, and my faith grew from religious doctrine and the practices and rules of the Church and the structure of the hours of prayer.”

As the oldest of six children, Sister Pierre helped her father with the family farm. Starting at 6 years old, she was plowing behind a team of mules.

“My brother under me wasn’t as strong, and they used me because they knew I was,” she said. “And we walked 2 miles to St. Benedict School on the railroad tracks every day. Our parents taught us to jump off if we saw the (inspection car) or the train.”

Her faith was rooted in German Catholic culture around the abbey.

“I grew up as a Benedictine, attending Mass at the abbey church and waking up to the sound of church bells each morning. We were a very Catholic family, and my faith grew from religious doctrine and the practices and rules of the Church and the structure of the hours of prayer.”

When she took her first vows, she was given the name Pierre by Bishop John B. Morris

“My patron saint is St. Peter,” Sister Pierre said, “and I am probably a lot like him.”

Her first assignment was at Shoal Creek, where St. Scholastica had been established in 1879. During her first two weeks there, a fire leveled the church, school and rectory in 90 minutes, and for the next six years, she supervised the rebuilding of the parish.

“Every parishioner spent at least one day a week hauling rocks from Shoal Creek and nearby villages to build sturdier stone buildings,” she said. “We were able to rebuild for almost nothing.”

Like many sisters, Sister Pierre earned her college degrees in education during the summer when schools were closed. One of her most memorable assignments was at St. John School, a segregation-era Black school in Fort Smith. She started a coupon collection drive with her students, working with a local grocer to redeem them and bought a film projector and other equipment for the school. She had high expectations for all her students, and several of them have remained her friends, including a retired Methodist bishop and philanthropist Charolette Tidwell, founder of Antioch for Children and Families.

“I was probably too hard on my students, but they appreciate it now,” she said.

During her last teaching assignment at St. Anne High School in 1971, Sister Pierre was named Arkansas’ outstanding high school biology teacher. She also served on the Economic Environmental Education Advisory Council in 1973 and as a commissioner on the Arkansas-Oklahoma River Compact Commission from 1982 to 1990.

As families grew smaller and Fort Smith’s two Catholic high schools closed, Sister Pierre turned her attention to advocacy for the elderly. She was a charter member of Western Arkansas Area Agency on Aging, which operates senior centers and provides transportation and meals to the elderly. She served on the board of directors for 31 years.

From 1981 to 1985, she was the executive director of Project Compassion, providing volunteer services to local nursing homes and assisted living centers. In 1993 she was inducted into the Senior Hall of Fame.

She served as the monastery historian for many years and directed the project to have St. Scholastica Monastery placed on the National Register of Historic Places. Until the sisters moved to their new monastery in 2018, Sister Pierre lived in the sixth-floor tower of the historic building.

“I could see Van Buren and Oklahoma and everything that went on from my sixth-floor window,” Sister Pierre said. “I had the best view, sat in my rocking chair and saw the world.”

Manual labor still drives Sister Pierre every day. The little girl who followed the mules as a child still works supervising the grounds crew at the monastery, but now she rides a bright green Gator utility vehicle.

“I’m responsible for our yards,” Sister Pierre said. “At least once a week, I go around with the employees and show them what needs to be done and how to do it.”

Sister Pierre was prepared to share her 100th birthday with Sister Agatha Knittig, who would have had her birthday March 31, but she died March 16. She taught in Catholic schools in Missouri and Arkansas and, in retirement, enjoyed baking cookies and sweets for the monastery bake sale and gift shop. Her funeral was celebrated March 24, with Father Jerome Kodell, OSB, who had been taught by Sister Agatha in first grade and Sister Pierre in second grade, presiding at her funeral Mass.