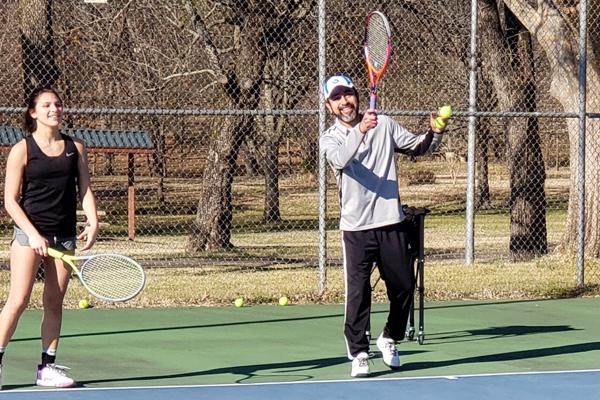 This time of year you can find Trinity Catholic School chaplain Father Daniel Velasco on the court.

He helped coach Trinity’s tennis team to a first-place finish last spring. This year, working with sixth through eighth graders in the new middle school, he is coaching two coed teams of 15 players to have fun, achieve proficiency and, maybe, a winning season.

Father Velasco’s tennis skills brought him to the United States in 1993.

“I started playing tennis at age 13 when my father got a tennis club membership through his company,” the 48-year-old said. “I took some lessons and fell in love with the sport. I started playing in tournaments and was going to the regionals and nationals in my age group by the time I was 16.”

“Father Daniel is always willing to share his skills with us at Trinity — from tips for our Careers students, regarding marketing and entrepreneurship, to tennis lessons,” Dr. Karen Hollenbeck, Trinity principal, said. “He’s a wonderful coach, always teaching and challenging those around him to try harder and to be better.”

When he was a freshman in college in Puebla, Mexico, the tennis coach of Harding University in Searcy visited on a recruiting trip and offered him a scholarship. Harding was about to move up from the NAIA division to Division 2, an exciting, but challenging move. Father Velasco played with their team until he graduated in 1997.

He went home to Mexico and worked for three years but decided to return to Harding to earn his master’s in business administration. The local Searcy firm where Father Velasco interned offered him a job after graduation and sponsored him for citizenship.

He continued playing tennis and giving lessons to local students. He entered the seminary in 2014 and was ordained in 2020. He has a dual assignment in Fort Smith, serving as associate pastor at Immaculate Conception Church and chaplain at Trinity Catholic School.

“Father Daniel is always willing to share his skills with us at Trinity — from tips for our Careers students, regarding marketing and entrepreneurship, to tennis lessons,” Dr. Karen Hollenbeck, Trinity principal, said. “He’s a wonderful coach, always teaching and challenging those around him to try harder and to be better.”

Eighth-grader Isabella Kindrick, who is playing her second season, said, “Father Daniel taught me that technique is everything, and you can’t take shortcuts. If you put the effort and practice in, it will show in your matches, especially in tiebreakers when your footwork and technique will give you an edge.”

“No matter how the game ends, if we put in effort and have a positive attitude, we can still feel satisfied,” teammate Ellie Coleman, an eighth-grader, said. “Tennis is supposed to be fun.”

Ellie’s mother, Lucy Coleman, serves as coordinator and scheduler for the teams, working with several other coaching volunteers. They play in a league with four Fort Smith middle schools and a combined Union Christian Academy/home-school team.

“Most of the players have had previous lessons with the Western Arkansas Tennis Association,” she said, “but Father Daniel is a human backboard.”

He divides his tennis teaching philosophy into two parts: “Attitude is important,” Father Velasco said. “Be positive always on the court, have fun and try your best and never give up. And remember the technical part — watch the ball and move your feet.”

At Trinity, Father Velasco uses his skills in many ways. In addition to celebrating Mass with the students every week and hearing confessions, he works with student retreat days and visits Careers classes to talk about his 14 years of managerial experience in the business world before entering the seminary. He tries to be there for students at their athletic events and meets. “When I coach the kids, I am still ‘Father Daniel’, interacting with them in a different way,” he said. “When I give them directions during matches, they say, ‘Well, he knows what he’s talking about.’”