Out of the 132 churches in the Diocese of Little Rock, 49 celebrate Spanish Masses 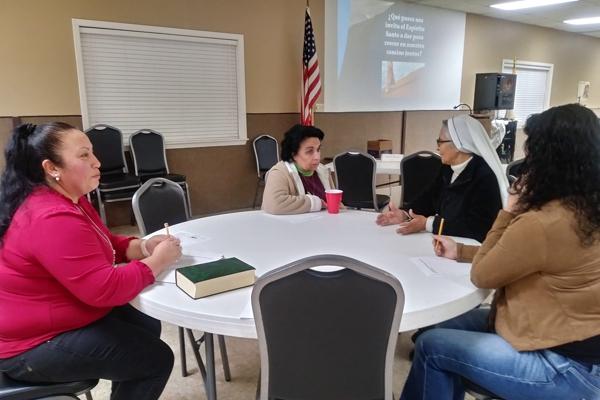 Part 4 of a four-part series on groups of Catholics the Church is striving to listen to during the Synod on Synodality.

How to be more welcoming is a challenge parishes face, no matter the person’s ethnicity. But for many Hispanics, feeling welcome in a parish means celebrating the faith in their native language, bridging the divide between Anglos and Hispanics, an emphasis on faith formation, as well as finding a way to keep their children interested in the Church, said Sister Mickey Espinoza, diocesan director of Hispanic ministry.

“The frustration in both the Hispanic and Anglo community and maybe even the Vietnamese, I don't know, or the Black community, is how do we come together?” Sister Mickey said. “And they say, yes, the language is a barrier, but how do we even go past that? Because the priests now are all bilingual, except (some) extern priests. How do we go past that to be able to be welcoming and be the diverse Church that we are because that's a Church universal.”

The Diocese of Little Rock has been holding listening sessions in parishes for Pope Francis’ “Synod on Synodality,” targeted to people on the margins, including Hispanic Catholics, and finding out ways the Church can do better to walk with them. The diocesan theme is “Journeying Together: Communion, Participation and Mission.”

"It’s important to incorporate and celebrate them, their culture, their traditions because there are a lot of rich traditions we can also learn from each other.”

If there is no local Spanish Mass, it can cause Catholics to leave for evangelical Protestant churches, especially ones that promote social services in their buildings. In one part of Arkansas, she’s heard of a group of Hispanics who celebrate Our Lady of Guadalupe completely separate from the local Catholic parish.

“So what's happening is they're going away. And a lot of these are eventually going to the other churches also because now there's ministers who speak Spanish,” Sister Mickey said.

Bilingual Masses can cause division if not celebrated properly, alienating both English and Spanish speakers who find it hard to follow along. It’s something Father Mauricio Carrasco is mindful of when he celebrates a bilingual Mass, typically Easter Vigil for his parishes of St. John Church in Russellville and the predominantly Hispanic parishes of St. Augustine in Dardanelle and St. Andrew in Danville.

“Mass is a time to worship. It's not something that's meant for me to be manipulative to just bring people together. So we try to provide Mass in their own language, where you feel comfortable praising and worshiping God,” Father Carrasco said.

Bridging the gap can mean finding lay people with a well-rounded understanding of cultures, like St. Andrew parishioner Cynthia Solis, who is the children’s faith formation director for St. John Church. She has organized devotionals like Stations of the Cross with associate pastor Father Martín Amaro and events like an All Saints Day party, that welcome Anglos and Hispanics of multiple generations.

“First of all, I do consider the differences about both cultures. You need to know there are differences, as well as similarities. Knowing a little bit of each culture, knowing how to approach people and how they will react, knowing what is best, even timing wise — you just have to consider even the minimal,” said Solis, 33, who was born in California, but her family is from Mexico. She also considers cultures when thinking about simple things, like translating and graphics on announcements and having both Anglo and Hispanic volunteers at events.

In the wake of the COVID-19 pandemic when everything from Masses to in-person ministries were halted, there’s a desire among Hispanics for more Catholic formation programs and spiritual retreats. It can revolve around the desire to make sure their children do not lose their Catholic values.

“They’re desiring to be formed. We need to know as leaders in the Church, but also in their different ministries. They want to be better prepared,” Sister Mickey said. “And also as parents, they want to know how to answer questions and understand their children. Their children are growing up here. They're second generation, third generation, they speak more English and they teach a lot of things in school. How do they respond to that and not lose them in Church?”

“I think it is important because they all grow up in different traditions; the traditions are really rich. As well as prayers and the Mass,” Solis said, and even if a child has been born and raised with the English language, “for religion-wise, parents have taken the children to the Mass in Spanish so even their relationship they have with the Lord is more Spanish. It’s important to incorporate and celebrate them, their culture, their traditions because there are a lot of rich traditions we can also learn from each other.”

Beyond celebrating more Spanish Masses in parishes throughout the state, any program or event a parish hosts should be person-centered.

Many parishes are already doing more than they think, Father Carrasco said, and it’s not just about finding more “brown people” to place on a parish council, especially if it’s not a person’s calling. Finding a lay leader like Solis is “huge” in bringing about unity, he said. But even if that person does not exist in every parish, it’s about parishoners being willing to learn. A person does not need to be fluent in Spanish, but learning a Spanish greeting can show respect. Father Carrasco pointed to his 77-year-old Anglo sacristan, who is learning Spanish and greets Hispanic sacristans with phrases in Spanish.

“She knows the language of the heart” and makes an effort to welcome people, he said. If a parish tries to be too ambitious in its changes without recognizing the people it impacts, it can be as effective as a badly orchestrated bilingual Mass.

“You just have to love them,” he said of all parishioners.

Sister Mickey said it would be a benefit for parishes to not only acknowledge their Hispanic population but also bring together small groups to learn about each other's cultures.

“The fact that they're there. Because some places just ignore it completely. Or it's a problem to solve — ‘Oh now, OK, another Mass.’ And it's a problem and it's not so much as, ‘OK, they're part of the family, they just speak a different language,’” Sister Mickey said. “Sometimes it's also their cultural expressions of their faith that we're not aware of … so maybe it's like dialoguing and explaining what it is, how they express their faith. But this would have to be on maybe a parish level and just getting small groups to come and share, ‘How do I express my faith? Why do I express it?’ And the bottom line is that we all have the same faith; it's just the different expressions and in a different language.”

Do you have thoughts, opinions or a story to share? The synod process is about listening. Click here to share your experience in the Catholic Church.