Principal Jan Cash, 65, died March 25, after serving 45 years at Our Lady of Fatima 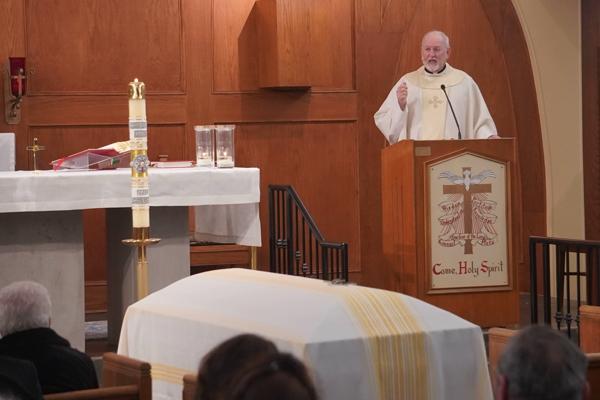 Aprille Hanson Spivey
Father Paul Worm, pastor of Our Lady of Fatima Church in Benton, celebrated the April 1 funeral Mass of Jan Cash, 65, who served as a teacher and later principal of the parish's school for 45 years.

Aprille Hanson Spivey
Father Paul Worm, pastor of Our Lady of Fatima Church in Benton, celebrated the April 1 funeral Mass of Jan Cash, 65, who served as a teacher and later principal of the parish's school for 45 years.

For some, the line between work and life balance can get hazy. For Jan Cash, that blurred line was just the way she wanted it. Cash was a steady presence for 45 years at Our Lady of Fatima School in Benton as a teacher and later principal until her death March 25. She was 65.

Beyond a career, beyond even a calling, the students were her life.

In 2017 she spoke to Arkansas Catholic of the joy in watching her students blossom.

“I love seeing them serve at church and to learn how to do community service and to see how that makes them feel good about themselves. That increases my faith. That’s what we’re here for, I tell the kids, to be Christ’s hands and heart.”

“She always thought of others. I don’t know if I ever met anyone who was more selfless than Jan. She made everything special.”

Janet “Jan” Lee Cash was born in Benton, May 16, 1956. She was raised Baptist and converted while teaching at Our Lady of Fatima, which now has 100 preschool-eighth grade students. She immediately began teaching there after graduating from the University of Arkansas in Little Rock in 1977. She taught third/fourth grade combined, later transitioning to teaching just fourth grade, said Catholic schools associate superintendent Marguerite Olberts who was principal in 1995 until 2005.

“Everything she did she did purposely to make school more special for the students so they remembered those experiences,” Olberts said.

“I had ADHD pretty bad; she helped me with my reading and my writing. She made learning fun,” he said.

Because she cared, “it made you want to do well on homework. I didn’t want to disappoint her, because I felt like she was my second mom, I really did,” he said.

Marguerite Olberts was Cash’s RCIA sponsor when she converted April 11,1998.

“She was one of our teachers, but we also got to be friends,” Olberts said, both studying for their master’s or spending time together. “She talked to me a lot about her faith. I remember when she told me how happy I was for her because you could tell she was so happy about it (converting). She was sure.”

Father Paul Worm, who knew Cash a little more than five years after becoming pastor of Our Lady of Fatima, said, “She had a deep faith in God. She played piano for the school Masses … right up to the last day she was here I think.”

Cash, who suffered from diabetes, started to decline in health in November and eventually began kidney dialysis. Her last day at school was early February.

Cash, who could play the organ, flute and piccolo, would often play the piano for weekend Masses.

Making sure the school welcomed everyone was a priority.

“I would translate for Hispanic families whenever they could not communicate with her and they would come with financial problems. So they couldn't pay tuition and she’d always be so sweet and generous,” said parish secretary Wendy Garcia Brown.

Above all else, Cash was humble. She refused to be recognized by the diocese for her 25 years of service in Catholic schools in 2002 during Catholic Schools Professional Day.

“She didn’t ever think of how to make her own life special, if that makes any sense,” Olberts said. “She always thought of others. I don’t know if I ever met anyone who was more selfless than Jan. She made everything special.”

Carrie Little, a third/fourth grade teacher, said Cash instilled a love of the arts in her students, whether she was teaching music or working with junior high students who would write and perform in an annual play.

Anthony Hall, 39, a former student who has two sons currently attending the school, said he remembers once trying to make a perfect score on his spelling test so he’d get to do something special with his dad on the weekend. He missed one word, and Cash, knowing about his plans, gave him the chance to redo it.

“You don’t think about it at the time that something like that would affect you, but later down the line looking back on it … the close-contact teaching helped you excel,” he said of Cash.

Former Catholic schools superintendent Vernell Bowen, who came out of retirement to serve as interim principal, said Cash’s “life revolved around this school and the parish,” having never married.

“There’s nothing quiet about Miss Cash. She was always excitable; she always seemed to have 15 things going at once and kept track of them all. Her memory was incredible,” Little said. “I took her classroom when I started teaching third and fourth grade … She still had files in there and could say, ‘Go look in that file cabinet, third drawer down, five files back is this thing.’ And it’d be there.”

Longtime school secretary Kate Self said “her presence,” is what she’ll miss most.

“She often told me her ministry was her music and the students. She gave herself to that.”

The students took Cash’s death hard, having recently made get-well cards for her.

“Monday (March 28) we said a rosary and there were lots and lots of tears. Kids and teachers alike,” Little said.

The school closed April 1 for the funeral.

“We told them she wasn’t hurting any more,” Little said.