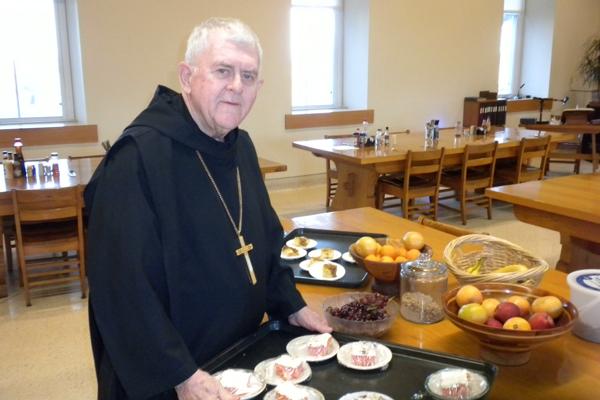 Looking back on seven years as the seventh abbot of Subiaco Abbey, Abbot Leonard Wangler, OSB, said one word has persistently come to his mind to sum it all up as he prepares to leave his leadership role: survive.

“There were a number of people who had COVID, a couple even in the hospital, but we came through it. We were able to support most of our workers during that time; of course, we had help from the government on the financial aspect of it,” Abbot Leonard said, adding that no monks in the community died of COVID-19.

And while two years of a pandemic does not encompass all the years of service since he was elected in 2015, it certainly has brought a new perspective. Abbot Leonard announced on the seventh anniversary of his election as abbot March 24 that he’ll be resigning to be once again counted among the flock of brother monks. Before him, Abbot Jerome Kodell stepped down as abbot after 25 years of service.

A July 7 election, conducted by the abbot president of the Swiss-American Congregation, will select a new leader of the 144-year-old abbey. According to Church law, those eligible to be elected must be 35 years old and a priest with five years of perpetual profession. Abbot Leonard served as prior before being elected abbot.

Keeping the ship on course was important to Abbot Leonard, including the 2019 launch of the capital campaign “Legacy from Tradition: Onward Together” for the abbey and academy. It has raised $5,622,500 as of March 28.

Glenn Constantino, abbey procurator who assists Abbot Leonard with operations, said humility has been a cornerstone of Abbot Leonard’s service. Last year, the abbot was honored by the Arkansas Blood Institute for hosting blood drives at the abbey since 1974. Whether assisting a fellow monk in charge of laundry or hopping in the driver’s seat when a monk has to go to the doctor, Abbot Leonard has led by example, Constantino said.

“I’m a believer in this idea of servant leaders. To me, a servant leader is somebody very much like Jesus,” who came to serve, rather than be served, he explained. “... If you walk in the monastery, sometimes you will actually see (Abbot Leonard) mopping the floor.”

Though there is an administrative side to the role, Abbot Leonard said being a spiritual leader was most fulfilling.

“The more I think about it, my favorite part … was to be in church and leading the community in prayer. I guess basically, we were doing what we were supposed to be doing, and of course, God had a lot to do with that. He’d make it more meaningful,” he said.

Abbot Leonard, 78, first visited Subiaco Abbey was ordained a priest June 6, 1970, and held many jobs at Subiaco Abbey and Academy, everything from teaching math, science and religion to serving as headmaster from 1986 to 1988 and again as an interim from 2010-2011. No matter what kind of service he was called to, he kept close to Christ.

“The one I usually lean on is the Jesus prayer: ‘Lord Jesus Christ, have mercy on me, a sinner.’ I don’t have a specific reason for it, other than it seems to work,” Abbot Leonard said.

The abbot has selected Father Cassian Elkins to organize the election when the abbot president of the Swiss-American Congregation arrives to oversee it. Father Elkins said the abbot has been a “father figure,” having made his solemn vows and ordained a priest with the abbot.

“One, his humility definitely and his ability to serve,” Father Elkins said of his top spiritual leadership qualities. “He was always willing to step in when something needed to be done, even the dirty jobs, setting up the kitchen, all those jobs. He was willing to take off the cross and get his hands dirty with the majority of things.”

On July 7, he will be known as Father Leonard Wangler again, and he’s hoping to see future growth. When he came back in the early 1970s, there were 106 monks, and now there are 33. Four have been in formation under his time as abbot.

While he believes “God has other plans for me,” he said his advice for the new abbot would be to listen to the monks.

“Probably be in tune with everybody in the monastery in the sense of being aware of some things that are going on in their lives that might impact the whole community,” Abbot Leonard said.