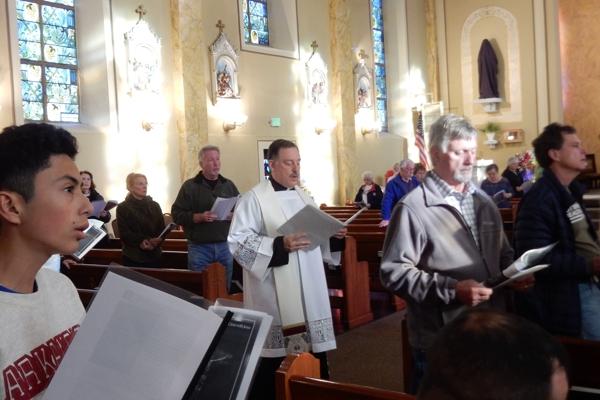 About 80 people attended the Ecumenical Stations of the Cross at St. John the Baptist Church April 8.

Although parishioners were urged to bring non-Catholics who may be interested in Catholicism, the first Ecumenical Stations of the Cross appeared to be mostly members of the church.

“I thought it was a little different,” said Jim Lockwood, a parishioner and convert. “It was good to have things that are different. We went to the stations at St. Mary’s, and theirs were different, too.”

Father George Sanders, pastor of St. John Church who converted to Catholicism in 2003, said the Ecumenical Stations of the Cross are based more upon Scripture than Catholic tradition. The version called “We Make the Journey of the Cross with Jesus” was published by the Catholic-United Methodist Dialogue of the United States Conference of Catholic Bishops.

“Some of them said, ‘You guys are so Christ-centered.’ It is such a beautiful focus on Christ.”

Father Sanders did not believe many visitors attended the April 8 stations. It was the first year Father Sanders had used an Ecumenical Stations of the Cross.

“I had asked that people bring their friends and family who might have an interest in the Church,” Father Sanders said. “Most of the people tonight looked familiar to me. We may make some changes next year.”

The version continues to use the 14 Stations of the Cross, as with traditional stations, but the liturgy is more descriptive.

“We united our hearts today with the offering of Jesus, your Son, so that living the faith of the Journey of the Cross, we might also live with the hope of life eternal in his resurrection on the last day,” Father Sanders prayed in the opening.

The longer Lord’s Prayer, prayed by most Protestants, was included in the ecumenical version.

“There are many things many non-Catholics will recognize,” he said.

Dennis Bratcher, an associate professor at Southern Nazarene University, wrote in “The Voice” that Stations of the Cross were developed to allow devotion to Christ’s last hours to those who could not travel to Jerusalem to retrace the route of Jesus. He said most Protestants consider the crucifixion as only an event in time, while Catholics consider the crucifixion “the commitment of God to humanity.”

“Most Protestants, especially in the West, are used to thinking of the crucifixion of Jesus as an event happening at a certain time and place,” Bratcher wrote. “But it is more than that. It is a truth about God and how he works in the world with human beings. It is the truth about God revealed in Jesus and his actions that provide us with an important touchstone for our own journey.”

Earlier in the week, Father Sanders said he led an Ecumenical Stations of Cross with the Ministerial Alliance, a group of Hot Springs ministers who regularly meet. He said the Stations of the Cross gave them a better understanding of the Catholic Church.

“Some of them said, ‘You guys are so Christ-centered,’” Father Sanders said. “It is such a beautiful focus on Christ.”