New Catholics share why they decided to join the faith 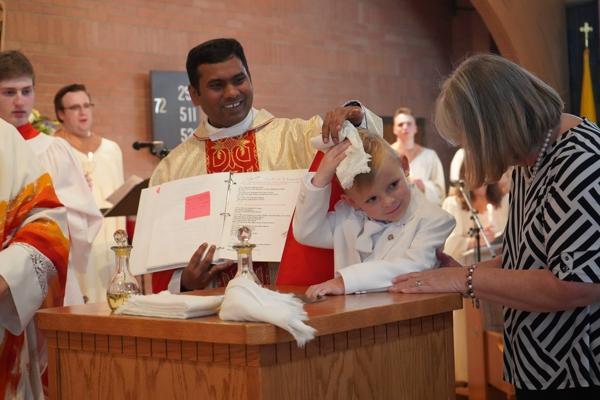 Aprille Hanson Spivey
Noah Bruzzichesi, 7, wipes baptismal water from his head with help from associate pastor Father Jayaraju “Raj” Sure after being baptized during Easter Vigil Mass at St. Peter the Fisherman Church in Mountain Home April 16. Lynne Weaver (right) is his godmother and grandmother.

Aprille Hanson Spivey
Noah Bruzzichesi, 7, wipes baptismal water from his head with help from associate pastor Father Jayaraju “Raj” Sure after being baptized during Easter Vigil Mass at St. Peter the Fisherman Church in Mountain Home April 16. Lynne Weaver (right) is his godmother and grandmother.

“The reason why I want to become Catholic is not only because my husband is a Catholic, but I knew in order to restore my life to God I needed structure and discipline. As a former pagan, I knew that if I didn't devote myself fully, my sins may be too unforgettable in the end. I ended up at St. Joseph by the grace of God and through the sacraments will I be forgiven.”

“I was raised a Southern Baptist and I didn’t think much about God until I met my fiance Ricardo (Ramirez) in 2015. We started talking about religion and I learned a lot from him. … I realized I needed to get closer to God. At RCIA I felt this is what I needed. I felt like I belonged. I had a feeling that God was telling me that I belonged.”

“A calling to start my journey with faith several years ago is what led me to Christ the King. I have attended many churches in the past and even though I can glorify God in any church, I felt God’s calling leading me here. I am proud to say I will be baptized at Easter Vigil as well as being received by the Catholic Church. I have many people in this parish to thank for helping me with my walk with Jesus, without them none of this would be possible.

“I feel very welcome at that church. I enjoy the Spanish (Mass) by the way, I understand the Spanish much better, I feel more secure. I love just the feeling there, I love singing the songs. Somehow I just feel like that's my spot, that church. I've been going there for three years, but I recently figured out that there's classes and so I thought, ‘Wow, let me go ahead and convert.’”

“My wife became Catholic (in 2019) and I realized the love that St. Joseph (Parish) had for Jesus and came to the realization that that's what I wanted in my house. Obviously, it can’t be exactly the same, but I want to be able to raise my daughter properly in the Church and have her to have a heart for the Lord the same way we do. So that was really the driving force. St. Joseph’s is the most welcoming church I've ever been to. When I first thought Catholic, I was like, ‘No, not in a million years’ and then I actually came to church and it's the best church I've ever been in. Between that and the tradition of the Catholic Church runs very, very deep. Hearing the stories, going through RCIA and learning about all of this stuff, has kind of driven me toward even the saints; they lived incredible lives. … They were incredible people and why wouldn't you want one of them praying for you?”

“It goes back to my roots, really. I grew up in Catholic schools, then as a young adult I kind of veered away from faith in general. A few years ago, I moved right across the street from Holy Souls and just got back into the Church. My children, 10 and 7, attend Holy Souls School, and my 7-year-old, Sam, is going to be baptized and receive his sacraments as well. I thought it would be special to do all of those things with him. We're doing our classes together and looking forward to Easter coming up and joining the Catholic Church officially.”

“(My daughter) got married in the Catholic Church (17 years ago) but after that she joined RCIA classes and became Catholic. She became a real advocate about the Catholic faith because she was always being questioned about it. She was a big influence on me joining RCIA class. I started going to the church, and I was so impressed and inspired by Father William (Burmester). I don’t know what it is about being in his presence but he just seems godly to me. I get kind of emotional about it. … The people in that church are just like family to each other, and I’ve never experienced that before. And they were so open, and I just feel blessed going there.”

“Everything about being Catholic — the way Mass was presented, the way the words were taught and preached — has resonated through me. Now, whatever action I take in life, I make sure it’s worthy in God’s eyes. This faith is something I’m going to stick to, no matter what.”

“I've tried everything else, and there was always something missing. Then I started going and learning about the Eucharist, and that, right there, is what did it. It just hit me. That's exactly what I was missing — the Eucharist, the body and blood of Christ. That’s it.”

“I started the process for an annulment through the Church because the woman I’m in love with is a Catholic. I started the RCIA classes through the church so I could better understand her and her faith. During the classes I was drawn into the wonder of it all. I realized that I had been a Catholic all my life ; I just never knew it  And through my love for my fiancé I found a true love of the Lord.”