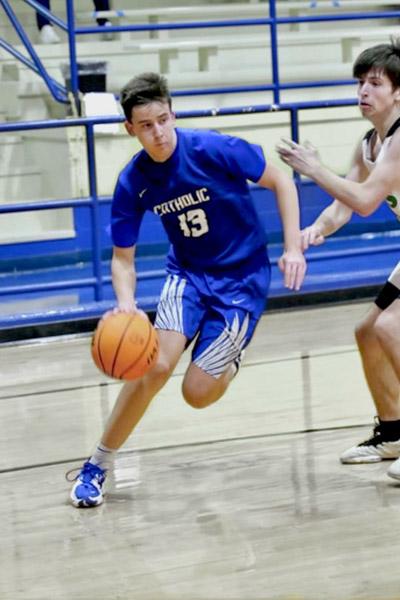 Courtesy Ozark Catholic Academy
Ozark Catholic junior Will Buron said without its own facilities OCA always plays "like the underdogs."

Courtesy Ozark Catholic Academy
Ozark Catholic junior Will Buron said without its own facilities OCA always plays "like the underdogs."

According to prevailing schools of thought, athletic programs don’t achieve overnight success. After all, it takes time to build up a team, install a system and develop the winning tradition that allows a squad to compete at the highest level.

Somehow, Ozark Catholic Academy in Tontitown didn’t get that memo. In its first year competing as a member of the Arkansas Activities Association, the Griffins qualified for the 1A state basketball tournament, pulling off a major upset at the regional tourney.

“We felt that we were heavily underrated this year from the start,” said Perrin Lunsford, junior power forward. “I think we were ranked sixth in our conference, and we were better than that. A lot of us have been starting since freshman year or had gotten legitimate playing time since freshman year. We knew we were already experienced for this coming year.

“Going to state was really our main goal because we knew we could do it. We knew the talent that we had,” he added.

“Every game we play is either an away game or neutral for us. It’s pretty mind-blowing. You look at the state tournament, almost every team in it has a beautiful gym, and we don’t have a gym, period. It’s kind of Bad News Bears-type thing.”

Playing with an attitude can take a team a long way, but OCA faced long odds in its quest to gain immediate respect in its loaded conference. For one thing, the squad lacked senior leadership, as the team boasted just one 12th-grader. They were also short on situational experience; being the first year in AAA-level play, no one knew how the Griffins would react to the pressure of stepped-up competition.

And then there’s the Griffins’ gym, or lack thereof. OCA rents gym space, having not yet raised funds to construct a gym of its own, which makes the team the first in anyone’s memory to qualify for state technically without a single home win.

“Every game we play is either an away game or neutral for us,” said head coach Cody Vaught. “It’s pretty mind-blowing. You look at the state tournament, almost every team in it has a beautiful gym, and we don’t have a gym, period. It’s kind of Bad News Bears-type thing.”

None of the above seemed to matter much to the squad, led by Lunsford, the team captain and his junior swingman Will Buron. From the first game, the duo sold the us-against-the-world mentality to their teammates to great effect, as the Griffins placed third in both the 1A West Conference and 1A-1 Regional.

“We started out pretty strong,” Lunsford said. “We lost to Eureka Springs on a last-second three, and then we won the Decatur Invitational. We kind of stumbled when conference play came because we started playing tougher competition, but we were able to win enough games when we needed to win and added a few upsets to secure that number three spot in our conference. Throughout the regional tournament, we also secured the three seed for state basketball.”

“The game that stands out is the one against Eureka Springs,” Buron said. “I think the guys going into that game were expecting to get blown out. It’s a pretty big 2A school known for their success. And we went in there, and we were playing with them. We took them to overtime, and I think we should have won the game. But it gave us a lot of confidence for the rest of the year.”

Part of the team’s success lies in its balance. Lunsford and Buron, both 6 feet 4 inches and products of St. Vincent de Paul School in Rogers, anchored the post along with senior center Nate Webster, while guards Jackson Holmes and Ervin Sanchez kept teams honest from the outside. But the real point of team pride was its defense which switched looks throughout games to keep opponents off-balance.

The high point of the year, arguably, was the win that sent the Griffins to state, which came in overtime against Western Grove, the bracket’s top seed from 1A East. OCA sent them packing by three points in overtime.

“(Western Grove) had only lost one game all season in their conference,” Vaught said. “It meant a lot to us to beat a one seed from the conference next to us.”

Only at state did the team show its relative youth and inexperience. By Buron’s own admission, the squad underperformed, getting into early foul trouble, and was bounced by a Calico Rock team that later lost in the state semis by a point to eventual champion Bradley. As disappointed as they were in how the season ended, both players said they’re that much more excited about what next year holds.

“One thing that is unique about our school is we always have a chip on our shoulder,” Buron said. “We don’t have some of the privileges that other teams have, like our own gym, our own weight room or a place to call home, really. It provides us an advantage in the fact that we always play like the underdogs. We have to work a lot harder than everyone else to get where we are.”

OCA students work hand in hand with needy in Appalachia