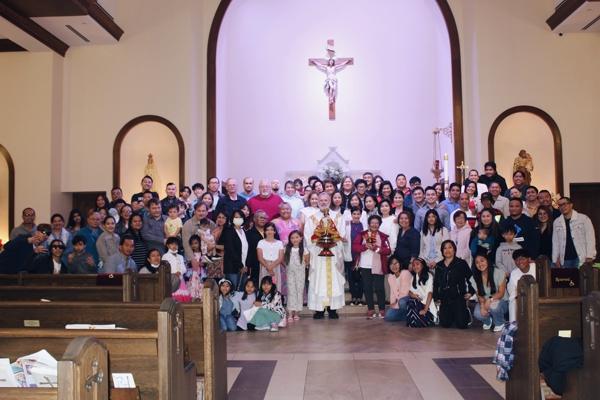 Erica Bacsa
Filipino parishioners of Blessed Sacrament Church in Jonesboro collect for a group photo on Easter Sunday, April 17. The church holds a Filipino Mass every third Sunday of the month thanks to pastor Msgr. Scott Friend, who has been learning to speak the language.

Erica Bacsa
Filipino parishioners of Blessed Sacrament Church in Jonesboro collect for a group photo on Easter Sunday, April 17. The church holds a Filipino Mass every third Sunday of the month thanks to pastor Msgr. Scott Friend, who has been learning to speak the language.

For the Filipino community in Northeast Arkansas, every third Sunday of the month is like a homecoming, despite their home being about 8,500 miles away.

The Blessed Sacrament Church sanctuary is filled with music, prayer and Scripture in Filipino for the 3 p.m., once-a-month Mass, thanks to pastor Msgr. Scott Friend, who has been learning to speak the language. On Easter Sunday, the Mass drew more than 100 people.

“We are so overwhelmed,” said parishioner Mary Grace Bacsa, 48, who has lived in Arkansas since 2019 and has been teaching Msgr. Friend Filipino since early this year. “This is the first time the community is being recognized by the church. … For us, it’s making us feel closer to home.”

On Easter Sunday, Msgr. Friend blessed a Señor Santo Niño (Child Jesus) statue, that a parishioner brought back on a recent visit to the Philippines, now displayed next to the altar. It will be used in next year’s Sinulog-Santo Niño Festival, the third Sunday in January, commemorating the Portuguese conquistador Ferdinand Magellan bringing the image, along with Catholicism, to the Philippines.

“We are so overwhelmed. This is the first time the community is being recognized by the church.... For us, it’s making us feel closer to home.”

Today, more than 80 percent of the country is Catholic.

The seeds for starting a Filipino Mass and building up the community were planted before Msgr. Friend even arrived in Jonesboro in 2021, after serving 16 years as the Diocese of Little Rock vocations director. He worked with Filipino seminarians, like Father Alex Smith, and attended some Filipino Masses at the Cathedral of St. Andrew in Little Rock, which “made me aware of their presence,” he said.

At Father Smith’s 2021 priestly ordination, he asked Msgr. Friend if during the election of candidates, he could read his portion in Filipino.

“I don't know if I said anything understandable at the time. But I thought, ‘I could do this,’” Msgr. Friend said.

So when he arrived at Blessed Sacrament, he noticed a few dedicated Filipino parishioners, asking one daily Mass-goer if there was a large Filipino community locally. He learned there were about 300 in the area.

He soon pulled together some of the Catholic community leaders, including Dr. Arlene Adviento-Borbe, asking if they’d like to have a Mass celebrated in Filipino.

The 51-year-old research agronomist, who holds a doctorate of philosophy in agronomy and works for the Agricultural Research Service, moved to the United States in 1999 to pursue her education.

“When I moved to the states, I felt disconnected because of the way I practiced” the faith in English. Filipino and English are the country’s official languages, but praying in Filipino stirs a different spirituality.

“Celebrating the Mass in our language, to me, gives me much more closeness,” Adviento-Borbe said, whose husband Abelardo and their three children also attend the Masses. “We sing, we don’t always deliver the prayers or say the prayers.”

The first Filipino Mass was celebrated in November and restarted Feb. 20.

Despite her busy schedule as a mother and caregiver, and a full-time career as vice president for human resources and administration, Bacsa teaches Msgr. Friend Filipino four to five times a week. She serves as a commentator during the Masses.

Msgr. Friend admitted “I stutter a little bit,” on the long words with many consonants, but said his fluency in Spanish has helped.

“What I've really tried to do in all of my priesthood is reach out to people, because that’s what we’re supposed to do,” Msgr. Friend said. “I got to do whatever it takes to reach out to people, so learning someone’s language is a way of making myself user-friendly for them. It’s really a way of saying to people, ‘There’s room in my heart for you’ and I especially want to do that as a pastor to anyone.”

That feeling of welcome is something Bacsa said she now feels, even while attending an English Mass, when Msgr. Friend says “Katawan ni Kristo,” the “Body of Christ,” in Filipino when she receives Communion.

Adviento-Borbe said singing and holding hands during the Lord’s Prayer has been powerful.

“That’s really something for me because it’s very close; I don’t want to cry. Because my dad died. I went home, I did not see him. He died during my travels to the Philippines” on Feb. 3, she said, explaining that her father Antonio, who had been ill, died on her way to see him for the first time in four years.

“The moment I hear the Lord’s prayer, I know he’s OK in heaven,” she said, adding that though she was in the Philippines for the February Mass, her husband told her, Msgr. Friend remembered her father in the Mass intentions and used “my favorite version of the (Lord’s Prayer) song.”

It’s in these small, but meaningful moments of welcome that Msgr. Friend hopes will help the parish bring in more Filipinos from surrounding cities.

“By trying to learn the language, it’s saying, ‘You matter to me. I see that you are there.’ Those are important steps in evangelization,” he said. “It’s important; it’s what the pope’s calling us to step out of our bounds and go reach out to people on the margins. This is a way to reach out to a group of people. Already that has worked out. It’s exciting.”

Editor's note: This article has been updated with the correct day Filipino Masses are celebrated.