Hallenbeck, 65, converted to Catholicism with overwhelming gratitude for God's mercy 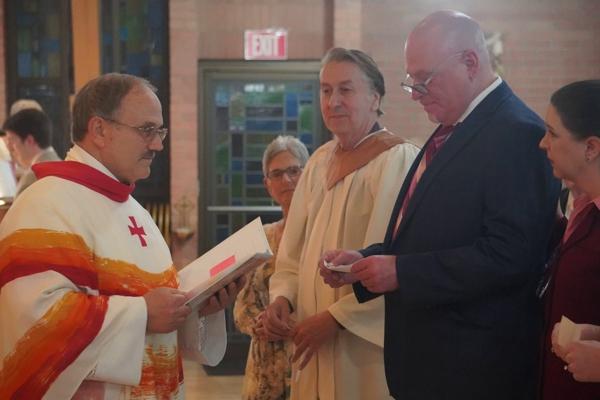 Like so many others throughout the world, Douglas Hallenbeck found his true home, converting to Catholicism at Easter Vigil April 16. But the 65-year-old’s journey of faith and how he ended up as the music director of St. Peter the Fisherman Church in Mountain Home was anything but ordinary.

It took him from New York to Los Angeles, on cruise ships to touring with Barry Manilow to a possible collaboration with Disney. But despite all the twists and turns, becoming Catholic was the defining moment.

Born in Schenectady, N.Y., Hallenbeck spent much of his upbringing attending church services with his father, who was a member of Pilgrim Holiness, a small sect which split from the Methodist Episcopal Church in 1897, despite being more drawn to his mother’s Lutheranism.

He was “enamored” watching his maternal grandmother, a pianist, as her hands moved across the piano and would always bug her to play.

“Before I turned 5, one day she had said, ‘No, I have to finish cooking’ or whatever she had to do. I went to the piano and I was trying to match what her hands were doing, and I apparently played a little bit of a melody. She got so excited. That’s when she started lessons.”

It led to a lifetime of chorale and music teaching, with his trained baritone voice and ability to play the piano and organ.

At Atlantic Union College in South Lancaster, Mass., he met his former wife, an accomplished singer. Their nine-year marriage in the 1980s ended whe he found out she “staged” miscarriages, when in reality, his wife had at least two abortions. They were divorced, and she has since died.

“It was devastating. It still is devastating. I felt guilt,” Hallenbeck said. “What’s so beautiful about going to confession, I had my first confession before confirmation. This is, of course, what Father (Norbert Rappold, pastor of St. Peter) helped me with. That act of confession is so healing and so liberating really.”

In the late 1980s, Hallenbeck moved to Olean, N.Y., to care for his aging parents. He kept crossing paths with the music director of the Basilica of St. Mary of the Angels in Olean, who was also not Catholic. Hallenbeck began to assist his friend, helping to play at funerals and weddings.

“I loved the Mass,” he said, adding, “That was kind of the beginning of when the seed started getting planted for me.”

Needing a change, he trained singers on cruise ships for both Royal Caribbean in Miami and Holland America in Los Angeles.

But in the middle of all this, he also turned down a shot at being a millionaire.

Hallenbeck wrote the movie musical, “The Girl Wonder: The Joan of Arc Musical,” which depicted her personal journey as well as the interactions of people who guided her, like the Virgin Mary. It was accepted by the ASCAP Foundation Musical Theatre Workshop in New York and Los Angeles, led by Stephen Schwartz, composer of “Wicked.” While there, he met a woman who loved St. Joan of Arc, her patron saint. She happened to work for the CEO of Disney.

It spurred two years of negotiations for Disney to buy it in the early 2000s.

“I relocated to L.A. and in the end it did not happen. ‘We want it, we like the music, we love the story. But we’re going to change it. Are you going to give us the rights to correct the story?’ I was like, ‘No I can't do that,’” Hallenbeck said.

Despite having one of the “biggest agencies” in L.A. representing him, pushing Disney close to a million dollar-deal, he declined the offer.

“This was huge. Disney, are you kidding me? I’d be pinching myself sometimes that it was happening. … This story was written based on truth and the fact that this woman is a saint. St. Michael the Archangel and Our Lady are working with this. I'm not giving them permission to mutilate this story. In that moment I knew, no amount of money; I couldn’t do it.”

But he moved forward. Hallenbeck received a call from Barry Manilow’s team to join his retirement tour “One Last Time” in 2015. Hallenbeck was responsible for choosing and working with choirs in the city of the tour that would perform with Manilow on the last three songs. He toured throughout the U.S., England and Canada until late 2018.

“Working with him, what's nice is just to see he’s really a true musician. … Not only does he write all his music, but he arranges it,” Hallenbeck said.

Passing through Arkansas on a tour bus in 2017 changed Hallenbeck’s life.

“It was a beautiful day. I knew nothing about Arkansas, but I was glued to the window. Something kept telling me, ‘Doug, this is where you’re supposed to be,’” he said.

While still on tour, Hallenbeck bought a house sight unseen in Mount Magazine in 2018. The tour wrapped up that fall and he started working as director of music for Emmanuel Lutheran Church in Fayetteville. He moved to Harrison in 2020.

“I knew that the Eucharist was not being given its full importance in that church. Not just that specific church but Lutheran” churches, he said. “I knew in my heart that Christ entered the Eucharist.”

Visiting the Diocese of Little Rock website, he found St. Peter the Fisherman Church in Mountain Home. And the job listing for a new music director. It was fate.

“In my prayer time, I thought Our Lady was really leaning on me. ‘It’s time for you to come home.’”

“I felt like I had come home. I felt the Holy Spirit, and I felt Christ’s presence. Father Norbert was so kind to me.”

He was hired in January 2021 to lead three choirs, an adult choir, contemporary choir and a young adult choir. He decided it was time to join the Church.

Hallenbeck was a welcome addition to the staff.

“My policy is bring your kids; bring them to rehearsal. That’s how they learn,” he said. “I would never want a young mom or dad not participating because they have young kids.”

“We all had a joke, but it’s the truth that before he was even Catholic, he was better than most Catholics we’ve ever met, just by his loyalty and reverence and his true caring of the Mass, really realizing what’s going on,” Sipe said. “... He’ll constantly bring up certain images to reflect on when singing to make it more of a prayer instead of worrying about what other people think. We’ll pray three Hail Marys before Mass. And he’ll ask through the intercession of the Blessed Mother and all the angels and saints to sing through us.”

Hallenbeck said his focus is on making sure his singers know it’s “an adoration choir. We are here to adore Christ.”

One song he enjoys sharing with the young adult choir is “Adoro te devote.”

“It’s basically saying to Christ, ‘I adore you and devote myself completely to you,’” Hallenbeck said. “My taste in sacred music is a little more simple. I’d use a piece for the level of reverence and adoration rather than the dramatic quality of that. … I’ve had all I want of secular music.”

Though grateful for the opportunities, Hallenbeck is not itching to go back to the entertainment industry.

“Manilow's people called me this past fall asking me if I would do some dates for them for Christmas. … I turned it down because I already had plans for church, it would have been right during Advent,” he said. “His tour guide was a little surprised. I said, ‘Yeah, I’m busy at church.’ ‘Wow, busy at church? You’re turning us down for church?’ ‘Yes.’ But he was really nice about it. Especially with coming into Catholicism, I was already in RCIA when they called me.”

Despite all the once-in-a-lifetime experiences, he wouldn’t change where he's at today.

“When the Holy Spirit comes into the Mass and the music as well, there’s nothing better than that. There’s nothing more rewarding than that,” Hallenbeck said.