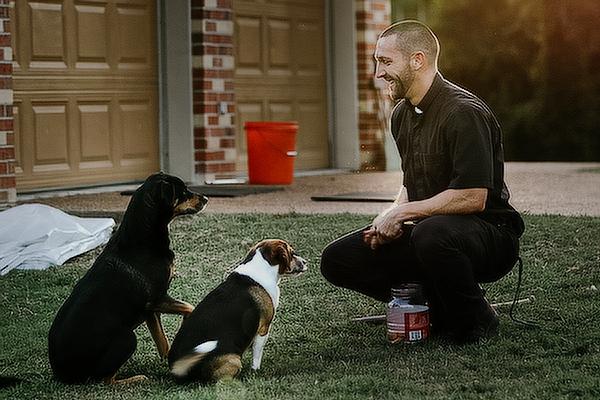 Father Stephen Gadberry was profiled in the Word on Fire Institute's documentary, “The Making of a Catholic Priest,” which made its world premiere on YouTube May 24, but it wasn't the first time he has been on television.

While the new documentary focuses on his religious duties, growing up in the Arkansas Delta and serving in the U.S. Air Force in the Iraq war, Gadberry, or "Father Flex," competed in the NBC game show “American Ninja Warrior” in 2018

In the trailer for the documentary, “The Making of a Catholic Priest,” Father Stephen Gadberry lays out what he’s all about: Farm boy from the Arkansas Delta; an Iraq war vet who loves fitness; he has two fun dogs; a “shepherd of souls” who loves his flock, pastoring two parishes.

But above all, the Diocese of Little Rock priest made it clear he’s an evangelist: “I’m insanely in love with our Lord Jesus Christ; I want to share him with everybody.”

It’s a chance to share the story of God’s impact on his life on a global scale through the show produced by Word on Fire, a Catholic media ministry founded by Bishop Robert Barron of the Archdiocese of Los Angeles, that reaches millions through videos, podcasts, books and Scripture studies.

A premiere was held at the University of Arkansas Community College at Batesville May 17, open to anyone for free, but especially his parishioners at St. Mary Church in Batesville and St. Cecilia Church in Newport, where he is pastor. It will appear worldwide on the Word of Fire Institute YouTube channel at 1 p.m., Tuesday, May 24.

“It was the opportunity to sit down and dig deep into my history for two days.... It really showed me how faithful God is and how he has been faithful my whole life.”

“The big point I'm wanting to make is that a person’s story is a beautiful thing whenever Christ is a part of it,” Father Gadberry told Arkansas Catholic May 5, adding that his own story “changed completely when I let Christ into it.”

It’s one of a handful of collaborations Father Gadberry, 36, has done with Word on Fire Institute after his first stint on the popular fitness competition reality show “American Ninja Warrior,” then connecting with Word on Fire CEO Father Steve Grunow.

The documentary was shot last May in five days, including two at Bishop Barron’s studio in Santa Barbara, Calif., for the interview portions of the documentary. They recorded the rest in Arkansas in August 2021, following Father Gadberry while he went about his priestly ministry.

Originally intended to be a six-week series on YouTube, similar to others like “Meet the Bulmans,” a series that follows a young, growing family as they prepare to welcome twins, Father Gadberry said it was a way to present “real” Catholic living to people.

“They wanted to present the priesthood as well and I just happened to be the priest they asked to do it,” he said, adding that once the first episode was put together, they realized “it needed to be told as a whole story at once.”

The documentary is about an hour long and tracks his life from childhood growing up in Wynne to his service in the U.S. Air Force in Iraq to his calling to the priesthood. He was ordained in 2016.

The experience of recording was both “extremely exhausting, but it was a very holy moment,” Father Gadberry explained.

“It was the opportunity to sit down and dig deep into my history for two days,” he said. “... It really showed me how faithful God is and how he has been faithful my whole life.”

One of the more powerful moments of the documentary Father Gadberry said was sharing about the death of his father Steve Gadberry, 32, and older sister Courtney, 11, who were killed in a one-car accident on May 5, 1994. Father Gadberry, who was 8 years old at the time, along with his sister Allison, then 3, were also in the accident but survived.

“I never cried over it,” he explained, adding at the time, he tried to be the man of the house, holding the emotions in. “As I got older, it developed into a wound.”

But while talking about the accident in the documentary, he started crying for the first time.

“It was just a flood of emotions,” Father Gadberry said. “A bizarre hurricane being unleashed, terribly traumatic memories and terrible wounds in a split second washing over in a love and peace and it gave me understanding. … It was really kind of the foot of the cross, from this side of the resurrection. Terribly painful, but filled with joy and hope. I knew the cross wasn’t the end at that moment.”

Father Gadberry was given the option to watch the documentary before it premiered, but declined, wanting to see it with his parishioners first.

“They all know me, but to see my story presented in its totality in a way I've never shared it with people is a very vulnerable moment, and I wanted to experience what they experience at the same time,” he said. “Because I know the power of God’s mercy, I'll be able to watch it as if it were somebody else.”

Initially, he was hesitant to do the show, not wanting the focus on him, but rather God’s work in him. He hopes it leads people to Christ.

“People that are not Catholic, people that are not Christian, maybe people totally atheist are going to see this stuff,” he said, adding that the show will appear at at least seven film festivals across the country this summer. “... Hopefully the story that’s being told leads them to Christ. Hopefully the cinematography attracts people, but the message pushes them to God.”

Father Stephen Gadberry was profiled in the Word on Fire Institute's documentary, “The Making of a Catholic Priest,” which made its world premiere on YouTube May 24, but it wasn't the first time he has been on television.

While the new documentary focuses on his religious duties, growing up in the Arkansas Delta and serving in the U.S. Air Force in the Iraq war, Gadberry, or "Father Flex," competed in the NBC game show “American Ninja Warrior” in 2018

Click for the Vocations 2022: In service to others index