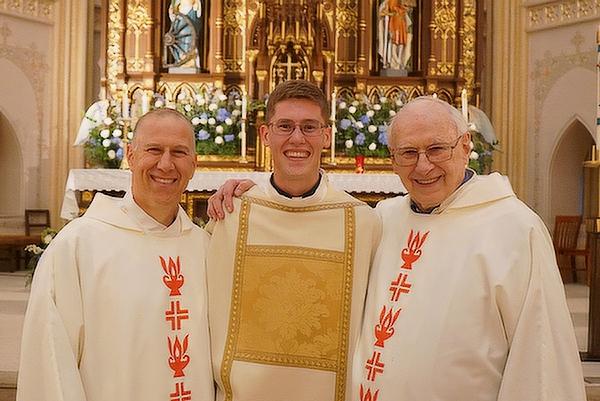 Malea Hargett
John Paul Hartnedy was ordained a transitional deacon May 19 at his home parish, St. Edward Church in Little Rock. He was joined by his father, Danny, and grandfather, John, who are both deacons.

Malea Hargett
John Paul Hartnedy was ordained a transitional deacon May 19 at his home parish, St. Edward Church in Little Rock. He was joined by his father, Danny, and grandfather, John, who are both deacons.

John Paul Hartnedy had a few still moments at the end of his diaconate ordination Mass to reflect on what God had given him. He stood at the bottom of the steps, holding the ciborium. As he waited to distribute Communion to the choir, he wiped a tear from his cheek.

“The Mass wasn’t rushed, but it was so packed full of beautiful moments,” he told Arkansas Catholic. “I had three or four minutes to think and pray and let it wash over me again and realized the beauty of the moment, the gift God was giving me. From my theology studies, I know I am changed. My soul is forever changed and given the grace to serve as he calls, but in a real way, I am the same man as I was before. Without his gift to me, I could not do what he is asking me to do. But with him and with what just happened, I can say yes, and I can be faithful. In that moment, holding the Lord in my hands, it struck me profoundly.”

Bishop Anthony B. Taylor’s homily also spoke to him.

“I was overwhelmed in a good way,” he said. “The bishop said my ordination and living out my priestly vocation is what the Lord has intended for me from all time before I was even conceived in the womb. As he was saying it, I was praying with it, and it kept coming up, ‘Yeah, this is exactly what God has made me for.’ I was so convicted and joyful. That hit me like a ton of bricks. … I know it is going to be tough work. I know he isn’t calling me to the couch, but in that moment, I said, ‘Yeah, Lord, where you go, I will follow.’”

“The bishop said my ordination and living out my priestly vocation is what the Lord has intended for me from all time before I was even conceived in the womb. As he was saying it, I was praying with it, and it kept coming up, ‘Yeah, this is exactly what God has made me for.’"

Bishop Taylor ordained Hartnedy a transitional deacon at his home parish, St. Edward in Little Rock. He has a unique experience among seminarians because his grandfather John and his father Danny are both deacons in the Little Rock area. His grandfather and father were chosen to vest Hartnedy with his stole and dalmatic.

Hartnedy’s parents, Danny, a teacher at Christ the King School, and Stephanie, a teacher at Catholic High School, prayed for both of their children, John Paul and Catherine, to follow the Lord’s will in their life. Choosing to name their son after St. John Paul II was an important reminder that he has carried with him all his life.

“We just loved Pope John Paul II and his teaching, especially the Theology of the Body,” Stephanie Hartnedy said after the ordination Mass, “and his teachings on the family.”

Being named after a pope, John Paul Hartnedy said, “He was such an awesome patron saint and a big inspiration. I love him for so many reasons. I love his zeal. He was a pope for a long time, and he was always willing; wherever the Lord wanted him to go, he went. I want to emulate that. I wanted to be involved, especially with young people. He started World Youth Day; he traveled to so many countries. I want to be involved in people’s lives.”

Of her son’s greatest gifts, Stephanie said, “He has a joy and a true love of the Eucharist and wants to communicate that to others.”

Hartnedy, 25, said he felt a strong calling to be a priest while attending Catholic High School in Little Rock. He credits a former teacher, Father Patrick Friend, for encouraging him to discern his calling more seriously.

“He asked me to be open to the Lord and ask the question,” he said, “and see if that is what God wanted me to do.”

After graduating in 2015, he earned his bachelor’s degree at Conception Seminary in Missouri. He is scheduled to be ordained a priest May 27, 2023, after completing his final year of studies at Assumption Seminary in San Antonio.

This summer, Hartnedy will serve at Blessed Sacrament Church in Jonesboro under pastor Msgr. Scott Friend, former vocations director. He said he is looking forward to giving homilies, celebrating baptisms and weddings and spending as much time as he can with parishioners, as well as visiting St. Bernards Medical Center and Holy Angels Convent.

“I can be a part of people’s lives in a more profound way and allow the Lord to be present with them in a way I couldn’t before,” he said.