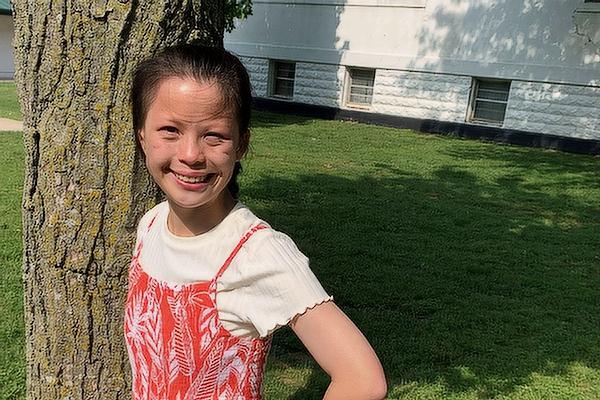 Alesia Schaefer
Gabrielle Miller, a recent graduate of Ozark Catholic Academy in Tontitown, had a series of surgeries in 2021 and 2022 to give her the right ear she was born without.

Alesia Schaefer
Gabrielle Miller, a recent graduate of Ozark Catholic Academy in Tontitown, had a series of surgeries in 2021 and 2022 to give her the right ear she was born without.

Gabrielle Miller’s life has not been without its struggles. Yet, the 17-year-old is heading to Benedictine College in the fall, demonstrating the resiliency and tenacity of this small-in-stature, but big-at-heart young woman.

Her story began in an orphanage in China where she was adopted as a toddler. Her parents, Ella and Michael Miller, adopted both her and another child, Sophia. As children, they spent their early years in Buffalo, N.Y., but in 2011, the family relocated to northwest Arkansas.

Miller attended elementary school and junior high school in Springdale. When she was an eighth-grader, she and her entire family were devastated by the death of her father, who had suffered a stroke several years before. The next year, Miller began high school at Ozark Catholic Academy. She was familiar with the school because it is located at her home parish of St. Joseph’s in Tontitown. Miller said the small student body was exactly what she needed to make friends.

Fitting in and finding friends had been challenging. She felt her physical limitations made it harder for her to be accepted by her peers.

“I was born without a right ear,” Miller said, “so kids made fun of me for that and then later because of my height.”

As a kindergartener, Miller started using a hearing aid in her left ear and then was fitted for a cochlear implant in the fourth grade. In 11th grade, she prepared for a series of surgeries that would give her another ear. In May 2021, she had her first surgery in Chicago where doctors took cartilage from her rib cage to begin forming them into the shape of an ear. Her second surgery happened in January, using some of the scar tissue to build the ear and put it in place.

Miller admits being self-conscious caused her to place a lot of pressure on herself.

“It affected my motivation to do well in school because I would think no one cared unless I was the best, a perfect student or most popular amongst my peers,” she said.

Despite the setbacks, Miller continued her academics and activities as a senior. She completed a senior capstone project by creating a prototype for a Catholic adoration app as well as serving as the school student librarian. She also participated in Students for Life, gave student tours and was a manager for the cross country and track teams.

Payton Bryant, college and career counselor at the school, said Miller has exceptional dedication to the school, is a devout leader and takes her roles very seriously.

Surprisingly, Miller said her biggest accomplishment in high school was finding her new faith in the Church.

“Starting out, faith was not a priority as much as academics were for me,” she said. “Once I started to allow God to be a part of my life, I became a better person. I learned to love others. I think this is more important than anything else. because my A’s won’t get me to heaven, but living a Christ-like life will. My faith has helped me remember God’s love for me and has also helped me to have hope in the future.”

As she closes the chapter of her senior year at OCA, Miller heads to college in Atchison, Kan., where she plans to pursue a bachelor’s degree in nursing. She wants to work as a nurse for a few years and then apply to medical school with the ultimate goal of becoming a pediatric surgeon.