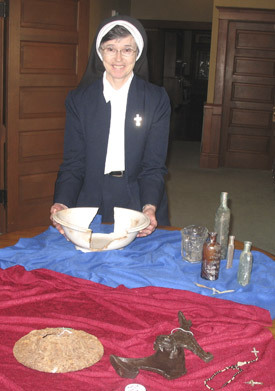 FORT SMITH -- When the Immaculate Conception Church Ladies' Auxiliary decided to do some landscaping on the grounds of St. Anne's Building in spring 2004, they had no idea what they would dig up.

"While we were planting the flowers, we discovered some items buried by the chimney," auxiliary member Joyce Cokely said.

The chimney and fireplace is all that remains of a 1800s "weather-boarded log house" that sat on the parish grounds.

Several published histories of Fort Smith indicate that U.S. President Zachary Taylor, then an Army general, lived in a two-story frame house for three years while supervising the construction of Fort Smith. The chimney was attached to a separate kitchen/ dining room log house. The Army headquarters included 10 other buildings, most made of logs.

Many parishioners hoped the recovered artifacts would provide concrete evidence of his residence.

But after the artifacts were examined, the archeological society indicated that they were all from the period 1853 to 1905. Taylor lived in Fort Smith from 1841 to 1844 and died during his presidential term in 1850.

What was found instead was a wealth of artifacts from the Sisters of Mercy.

According to "Arkansas Frontiers of Mercy," a history book written by the Sisters of Mercy with Jane Ramos in 1989, the sisters were recruited by Bishop Andrew Byrne to come to the Arkansas wilderness and minister to fledgling communities of Irish Catholics in Little Rock, Fort Smith and Helena. Bishop Byrne bought 640 acres in Fort Smith -- the land that had comprised Camp Belknap during Taylor's residency -- and looked for 1,200 to 1,300 lay people and five to eight Sisters of Mercy to colonize the land. The group left Naas, Ireland, to begin life in western Arkansas.

According to a University of Arkansas-associated Web site, ProjectPast.org, the group of sisters left Little Rock by steamboat on Jan. 19, 1853, and spent their first night in Fort Smith at Camp Belknap. They quickly ascertained that President Taylor's previous residence would make an ideal convent and school called St. Anne Academy.

"Every single sister volunteered to come to America, even though they knew they would never be able to come home again, but Bishop Byrne was only able to bring five sisters," said Sister Mary Sarto Gaffney, RSM, a native of Ireland who now lives at McAuley Convent in Barling. Sister Sarto was one of the last to live at St. Anne Convent in 2001 before it was converted for parish use.

They established two schools, one for girls and one for boys, as well as catechism classes and instruction for adults. In 1859, Bishop Byrne returned to Fort Smith with a number of Irish postulants, and a novitiate program commenced there.

When Civil War broke out in 1860, it was difficult for the sisters to run their boarding schools in Fort Smith, Helena and Little Rock. Several hundred Arkansas Confederate troops occupied Fort Smith on April 23, 1861, in opposition to the United States Army.

As the war escalated, money and food were in short supply, and travel was unsafe. The sisters continued to operate their schools with reduced enrollments, eventually expanding their ministry to open infirmaries to treat wounded soldiers, both Union and Confederate.

The biggest challenge for the Sisters of Mercy in Fort Smith came after the final battle for Fort Smith on Aug. 24, 1864, when Confederate General Samuel Cooper tried to drive Union forces from the town and was repulsed. The sisters set up a hospital and cared for all soldiers with equal compassion.

By that time, there were few students remaining. Those who remained could not afford tuition. The few boarders at St. Anne were joined by large numbers of homeless children whose fathers had died during the war and whose mothers had succumbed to illness because of hard work and deprivation.

Immaculate Conception Church was not established on the site until 1867.

The recovered artifacts bear witness to the order's medical ministry during the Civil War. There are many bottles of patent medicine, including a number of Liquizone bottles, composed of 99 percent water and 1 percent hydrochloric acid.

There are also whitening and bluing agents and a washboard. A number of rosaries and crucifixes were recovered, along with part of a cast-iron prayer kneeler.

Archeologists speculated that a cartridge for the Webley pocket revolver, circa late 19th century, might indicate that the sisters armed themselves when traveling on the frontier.

By 1875, the Zachary Taylor House was destroyed by fire and a new school was constructed. The original Zachary Taylor kitchen/St. Anne Academy building was torn down by 1903, but the chimney was saved and converted in 1904 into a three-sided natural stone grotto honoring Mary and the saints.

It was at this site, 130 years later, that the Ladies' Auxiliary uncovered the artifacts from the order's many years of ministry.

The items have generated so much interest that Frontier Fest committee member and Ladies Auxiliary member Cokely hopes they can be permanently displayed soon.

"We are working on setting up a permanent museum for Immaculate Conception Church in St. Anne's Building," Cokely said. "And the Sisters of Mercy, who contributed so much to our Catholic history here, will have a special exhibit."