After six years of preparation, two deaconate ordination Masses will be held in June 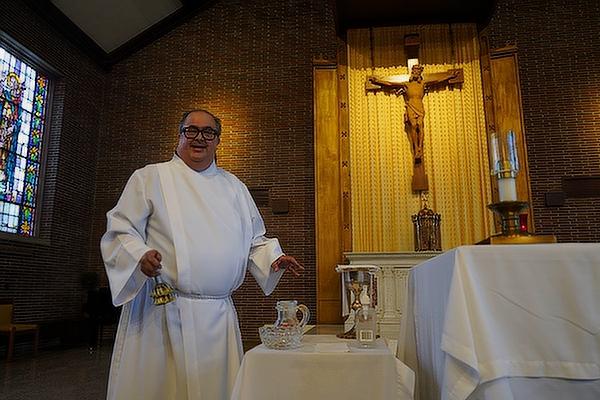 In 2016, 130 men in the Diocese of Little Rock began a year of discernment, to reflect on if God was calling them to serve his Church as a deacon.

During two ordination Masses in June — one June 11 at Christ the King Church in Little Rock and another June 25 at St. Vincent de Paul Church in Rogers — 46 candidates will be ordained, after discerning, taking classes, completing homework assignments and meeting each month, all amid the uncertainty of the COVID-19 pandemic as well as struggles and loss in their own lives.

“They’ve been very resilient and very open to what they’ve been asked of in formation,” said Bishop-elect Erik Pohlmeier, diocesan director of permanent diaconate formation. He will be ordained bishop of the Diocese of St. Augustine in Jacksonville, Fla., July 22.

The diaconate process takes six years, with the first being a year of discernment before candidates apply. It is followed by a year of aspirancy. Bishop-elect Pohlmeier said the process is the same model used in seminary formation, focusing on four pillars: academic, spiritual, pastoral and human formation, spread throughout the years. Once ordained, deacons are assigned to a parish by the bishop, in most cases to their home parish.

“They’re going to be asked to serve the people of God in union with Christ the servant....They represent the Church, they have a significant role in serving at Mass and preaching at Mass. So partly, it’s to recognize that the people they serve would want somebody who is prepared.”

English curriculum was provided by St. Meinrad Seminary in Indiana, and the Spanish curriculum was taught by diocesan priests. In the fall of 2017, candidates began theology, Scripture and other classes, with a lot of reading, homework and papers. For spiritual formation, they must have a solid prayer life and meet with a spiritual director. In pastoral formation, they learn the social teachings of the Church and serve in parish ministry.

“Human formation, that’s about just growth as a person, so that means relationships and interactions and well-being, taking care of their health and all the different things that are part of serving well,” Bishop-elect Pohlmeier said.

The English-speaking cohorts, split into two groups for the 35 men, met every other month for a weekend at St. John Center in Little Rock, and met virtually in between. Eleven Spanish-speaking men met monthly at Subiaco Abbey with no online component. Weekends encompassed eight to 12 hours of instruction. Despite the pandemic, Bishop-elect Pohlmeier said in-person meetings switched to virtual once for the English-speaking class and a class was made up in Spanish.

“They didn’t get behind academically at all,” he said, adding the pandemic did impact their service in the parishes. “In the plan, we had to assign them two years of parish ministry. They did one year of that and COVID disrupted the second year of that.”

El Salvador native Jaime Flores, 54, and his wife Josefina Soto Flores, attend St. Boniface Church in Fort Smith and he is one of the Spanish-speaking men to be ordained.

“In 2001, the Spanish community was in need of a priest or deacon to teach the faith, or celebrate the liturgy, in our own language. And I felt God calling me to serve in that way. And then I talked with Sister Josefina Gutierrez, who told me about the permanent diaconate,” Flores stated in an email.

He said it’s been a challenge to learn English, but vital to serve “not only one section of the community,” but Anglos as well.

While there is not a requirement for a spouse to come to the classes, there is an expectation, Bishop-elect Pohlmeier explained. He said an important role of the wives is to help the new deacons “keep a balance with family” when it comes to serving.

“They have to say no when it’s more than the family could sacrifice,” he said.

Tracy Rios, wife of candidate Marc Rios, said they are “overjoyed” at God’s will for them through this process.

“It was a blessing and a grace to be a witness to watch my husband, his spiritual growth, his growth overall for his faith,” she said. “I'll be honest when we first started this process, I'm a convert, I felt I was pretty knowledgeable in the Bible, but as he progressed it got to a point where I was like, ‘Well, you know more than me.’”

Because these men are being ordained, it’s a change to who they are, making the years of formation critical.

“They’re going to be asked to serve the people of God in union with Christ the servant,” Bishop-elect Pohlmeier said. “... They represent the Church, they have a significant role in serving at Mass and preaching at Mass. So partly, it’s to recognize that the people they serve would want somebody who is prepared.”

Each candidate has more than just a desire to serve, but a calling from God. For farmer Greg Fischer, 57, a parishioner at Holy Rosary Church in Stuttgart, he finally relented around 2012, after years of people suggesting he look into the diaconate.

“I'm out on this tractor, in that 80-acre field. I’m out in the middle of nowhere, it would continually pop in my head and I’d push it to the side. I’d turn the radio up, trying to ignore it,” he said of the thoughts about becoming a deacon. “I got this pressure around my heart, and I thought ‘That’s weird.’ It goes on forever, and gets a little stronger. Out loud I said, ‘Fine, I’ll be a deacon’ and that pressure goes away.”
Later that night, he told his wife Mary Nina about his call to be a deacon. She replied bluntly, “I wondered when you were going to figure that out.”

But his formation process has become bittersweet, losing his wife to cancer in 2018.

“‘I want to live long enough to see you ordained,’” Fischer’s wife had said. “She’s played a big role these past four years. There’s definitely that influence, spiritual influence, if you want to put it that way, to continue with this. This is where she thought I needed to be even from the very beginning. Just God's plan to be there. I’ve got a whole new experience I'll be able to share with people I didn't have before because of her death.”

Candidate Marc Rios, 55, a parishioner at the Cathedral of St. Andrew in Little Rock, also felt that support from his fellow deacon candidates as he became a caregiver to his mother, Jeanne Easley, who died of cancer in December and then his stepfather, Danny Easley, who died in February from COVID complications.

“It was my formation that got me through,” he said. “I can remember she just moaned and screamed in agony, nonstop for seven days, but I would sit in the kitchen table on my laptop, at the time I was taking moral theology II. And it was concerning DNR (do not resuscitate), assisted suicide, all the things that I was living. I was studying about it, having to write about it,” Rios said. “I was posting online to my mother's cries and moans about what I was going through.”

Rios added, “What got me through that too was the support of all the priests, the bishop, the deacons. My Church family really came through for me.”

Despite the heartbreak, Rios said becoming a deacon is what he’s meant to do. When his wife converted to Catholicism in 2008, it’s when the Holy Spirit moved him to be more than just a “lukewarm Catholic.” As the resident manager of St. John Manor the past three years, he and his wife live at St. John Center as he cares for senior priests. Tracy also assists when needed, while she’s not working at her full-time job. Rios said he has looked to Mary when saying “yes” to God.

“The greatest thing that ever happened in our history is God becoming man. and it was because of her ‘yes.’ So I follow that model,” Rios said. “And that's the same model in this whole building. I'm surrounded by people that all said yes and gave their life to God, in service of God. So I'm just immersed in a house, I call this the ‘House of Yes,’ because everyone said yes to the Lord here.”

The next class of deacons is already discerning. In January, about 90 men and their wives started with a discernment year, and about 85 are still discerning, said Deacon Mark Verkamp, incoming director of diaconate formation, beginning July 1.

Candidates accepted into the program will begin their aspirancy year in  2023 and will be ordained in 2028. In the past, there has been about 10 years between diaconate classes.

“There is just such a need, and deacons fill a very important part, not just as the priest’s helper,” Verkamp, said of the benefits of having only six years between the two classes. “A deacon’s role is to be a bridge between the Church and the people. They just provide stability in the parishes.”

Verkamp, who serves at Sacred Heart Church in Charleston, said there may be changes to the process, but the biggest for now is classes for Spanish-speakers will take place in Little Rock, allowing both Anglo and Hispanic groups to “be together a lot more.”

Ultimately, Verkamp said men considering the diaconate must have a call to serve.

“Definitely someone who is called to serve Christ by serving others,” he said. “They have a strong faith, realizing that the truth of the Gospel and the promises of Christ and wanting to share the Good News, share the Gospel. Everything else stems from that.”

Click for the Vocations 2022: In service to others index

Deacon Mark Verkamp has a strong bond with St. Joseph

Ministry of priests, deacons is a life lived for others