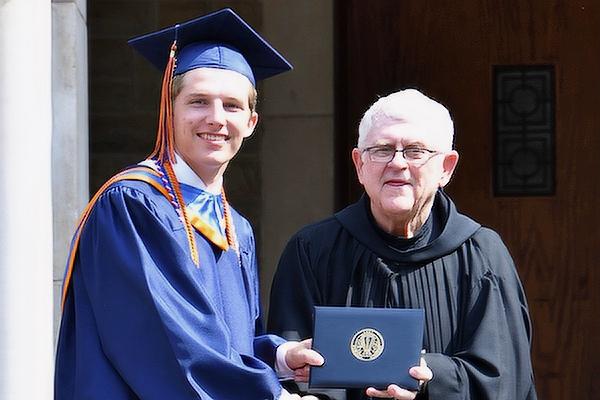 The Post name will continue, with his two younger brothers as Subiaco students.

The Altus native did more than just walk in his predecessors’ shadows. To say Post was involved and excelled would be an understatement. The Trojan earned a 4.0 grade point average, was senior class president and an all-conference football player. He was a member of the basketball, soccer and track teams and was involved in other on-campus and extracurricular activities.

“It was life changing, honestly,” the 19-year-old said. “I learned so much about myself and — with so many international students — other people, too. The diversity there in race, culture and background gave me a different perspective of the world.”

“Justin Post has exhibited exemplary leadership skills during his time as a student at Subiaco Academy. Justin is a young man who walks-the-walk of his Catholic faith, and he provides others with a great example of Christ’s love.”

But going to Subiaco wasn’t part of his original plan.

“I had gone to public schools for eight years, and I didn't want to leave close to home,” said Post, who commuted 40 minutes to campus. “But within two weeks the bond that I made with the guys in my class was amazing.”

Time management was a skill he mastered early so that he could succeed academically and athletically.

“There was a lot of late night and early morning studying and making sure my homework was done after sports,” he said.

After four years, he’s added to the Post family’s legacy at the school.

“Justin Post has exhibited exemplary leadership skills during his time as a student at Subiaco Academy,” said headmaster Dr. David Wright. “Justin is a young man who walks-the-walk of his Catholic faith, and he provides others with a great example of Christ’s love.”

Mike Berry, Subiaco’s assistant head for student life, athletic director and head football coach, is one of Post’s mentors who may know him best.

“Justin is a very well-rounded young man. His personality is contagious,” Berry said. “He is very generous with his time and is always willing to take an international student in and make them feel like family. It has been a pleasure getting to know Justin over the years as well as coaching him in football. It will be very rewarding to watch him walk across the stage and follow in the footsteps of many family members receiving his diploma from Subiaco Academy.”

While he was a stellar scholar and athlete at Subiaco, Post also took time to develop and share his Catholic faith. He is a member of St. Mary Church in Altus, served on the Diocese of Little Rock’s Youth Advisory Council and assisted with putting on the annual statewide Catholic Youth Convention in April.

“Justin is the second from the Post family to serve on the Youth Advisory Council,” said Liz Tingquist, the Diocese of Little Rock’s director of youth and campus ministry. “He’s a team player and well liked. There is no doubt he will be extremely successful in life.”

This fall Post will attend Benedictine College, a Catholic school in Atchison, Kan., where he will major in either pre-medicine, physical therapy or architecture.

“It’s very similar to Subiaco with the monastery, school, small town and tight-knit community,” he said. “There are a few Subi alums up there right now. I can’t wait to start the next chapter of my life.”