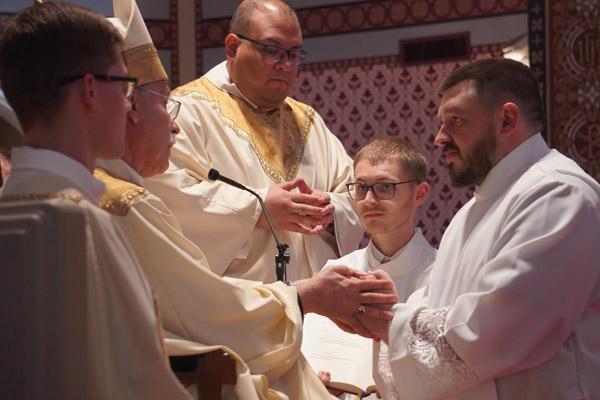 Aprille Hanson Spivey
Bishop Anthony B. Taylor blesses Deacon Nathan Ashburn during his diaconate ordination May 25 at the Cathedral of St. Andrew in Little Rock.

Aprille Hanson Spivey
Bishop Anthony B. Taylor blesses Deacon Nathan Ashburn during his diaconate ordination May 25 at the Cathedral of St. Andrew in Little Rock.

Ahead of his diaconate ordination, Nathan Ashburn admitted it was a “loaded question” about how he was feeling — both excited and nervous. But when Bishop Anthony B. Taylor performed the laying on of hands, where Ashburn received the strength of the Holy Spirit, “It was just joy. I was just so happy in the sense of taking on this call,” he said.

Deacon Nathan Ashburn, 33, was ordained a transitional deacon May 25 at the Cathedral of St. Andrew in Little Rock, an integral step toward his priestly ordination next year.

“I woke up this morning at 6 a.m. super excited,” Ashburn said, admitting he’s not typically so cheerful that early.

Ashburn was surrounded by seminarians, priests, friends and family, including parents Deacon Chuck and Juliann Ashburn and his sisters Lauren and Mary Katherine Ashburn. His brother, Capt. Christopher Ashburn, is stationed in Vicenza, Italy.

Bishop Anthony B. Taylor celebrated the ordination, with several priests and deacons assisting. In his homily, he pointed to Ashburn’s fitting Gospel choice of John 10:11-18, where Jesus reveals, “I am the good shepherd.”

“You have responded to God’s call to prepare yourself to share as a priest in Jesus’ work of shepherding his flock today,” Bishop Taylor said. “Leading others while being led by the Lord yourself. Accompanying others in their time of shearing and loss, even as the Lord accompanies you through your own time of shearing and loss. And protecting others, even to the extent of laying down your life for the flock, just as Jesus laid down his life, for you.”

Ashburn’s journey to giving his life over as a shepherd was rocky. Upon graduating from Catholic High School in Little Rock, Ashburn joined the U.S. Army in 2007, serving as a paratrooper. He was deployed twice to Afghanistan.

“During my six and half years in the Army, I was actually a non-practicing Catholic. I was upset with things that had happened, lost some friends,” he said. “But I never really lost grip in the sense of there is a God. I just wasn’t happy, so I didn’t do anything.”

But God was always there. During his Middle East tours, he served as a forward observer, directing incoming artillery, mortar strikes and sometimes coordinating air attacks. He was positioned on a hill when an RPG was launched in his direction.

“I felt something hit me in my left side. I was just like, ‘I think a rock kicked up from an RPG and hit me,’” Ashburn said.

After taking off all his gear back at base, he learned that there was a hole in his armor and blood. He sustained a gash from the shrapnel and received a Purple Heart.

“That morning before I left for that operation, I was making the decision to either leave those soft armor plates or take them off. Walking up these tall mountains, every pound counts,” he explained. “I just decided to leave them on. I thank God for that moment. To be honest, I think it saved my life.”

When he was discharged in 2013, Ashburn struggled with mild post-traumatic stress disorder, with symptoms of agitation, anger and trouble sleeping.

“I used alcohol a lot to self-medicate. I had this realization that I could fix it myself, and this was a temporary fix. It obviously didn’t work out well for me,” he said. “I was going down a very slippery slope.”

His parents expressed their concerns about the path he was taking. It was the turning point, something they reflected on right after his ordination Mass.

“What an amazing God we have,” Chuck Ashburn said. “Because he did have some struggles, and the Lord just paved the way, lowered those mountains and those hills within his heart. Beautiful day today.”

“He helped me get back into my faith and find my place in the Church,” Ashburn said. “In the process of struggling with PTSD, I found my love for prayer and Christ and asking for help, and in that process I heard that call.”

In the weeks leading up to his call from God, Ashburn was attending Pulaski Technical College in Little Rock, asking the Lord each day, “What do you want me to do with my life?”

He felt the call while hanging out with his close friend in early 2015.

“I just had this moment of peace and joy … it just rolled over me from head to toe; I zoned out. I heard it in my heart, ‘Nathan, I want you to be my priest,’” Ashburn said. “I was actually crying a little bit. I looked at (my friend JB Baumgardner), ‘I know what I want to do with my life. I’m going to try this being a priest thing out.’ I’ll give this a shot.”

Ashburn entered the House of Formation in March 2015 and currently studies at Assumption Seminary in San Antonio. Bishop Taylor assigned him to serve at Immaculate Heart of Mary Church and and St. Mary Church in North Little Rock this summer.

Ashburn said the gift of compassion would help him in ministry.

“Understanding people’s struggles, where they’re at and helping them come to realize that there’s always someone there. You’re not alone. I’ve been through it myself, struggling with these things,” he said. “Being a deacon and soon to be a priest, you learn to journey with people, walk side-by-side with people with their pain. I really find this as an opportunity and a gift from God to help people who struggle with the same things I did.”