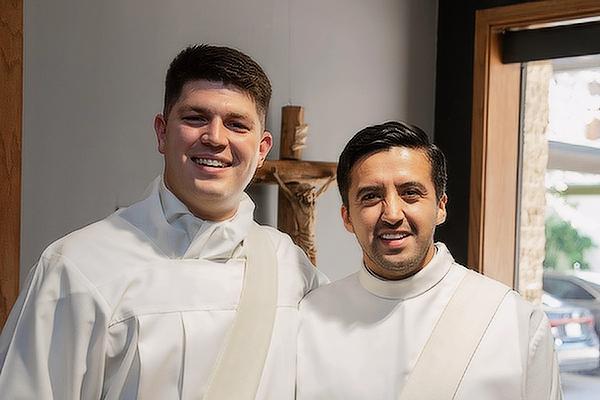 Photos by Bob Ocken
Bishop Anthony B. Taylor ordained to the priesthood Father Daniel Wendel (left) and Father Jaime Nieto at the Cathedral of St. Andrew in Little Rock, May 28, 2022. In attendance were Archbishop J. Peter Sartain, Bishop Francis I. Malone and Bishop-elect Erik Pohlmeier.

Photos by Bob Ocken
Bishop Anthony B. Taylor ordained to the priesthood Father Daniel Wendel (left) and Father Jaime Nieto at the Cathedral of St. Andrew in Little Rock, May 28, 2022. In attendance were Archbishop J. Peter Sartain, Bishop Francis I. Malone and Bishop-elect Erik Pohlmeier.

Amid an overflowing crowd of cheering congregants, Fathers Jaime Nieto and Daniel Wendel embraced with joy on the altar of the Cathedral of St. Andrew in Little Rock, finally fulfilling their call from God to be his priests.

The two will forever be connected in ordination and couldn’t be more representative of the Church in Arkansas today — an immigrant from Mexico and a born-and-raised Arkansan from a large Catholic family.

The men were ordained to the priesthood by Bishop Anthony B. Taylor May 28. He pointed out in his homily that the first reading chosen by the newly ordained from Isaiah Chapter 61 is the same used in the Chrism Mass at the start of Holy Week, where priests renew their vocational commitments. It is also the text Jesus chose when his public ministry began (Read homily).

“Regarding what Jesus said, ‘Today this Scripture passage is fulfilled’” Bishop Taylor said. “... Daniel and Jaime, by choosing this passage, you're saying that you want to be so intimately united to Jesus that his mission becomes your mission, with a special concern for those who need us the most … ”

"The two will forever be connected in ordination and couldn’t be more representative of the Church in Arkansas today — an immigrant from Mexico and a born-and-raised Arkansan from a large Catholic family."

A more intimate setting than last year’s ordination of five priests in Barton Coliseum, it was filled with both the Holy Spirit and an influx of spiritual leaders — Bishop Taylor, retired Archbishop J. Peter Sartain, Bishop Francis I. Malone of Shreveport, La., and Bishop-elect Erik Pohlmeier, who will be installed as bishop July 22 in the Diocese of St. Augustine in Florida.

It was the first ordination with Father Jeff Hebert as the director of the vocations office, taking the helm from Msgr. Scott Friend, who helped produce 44 priests during his 16 years of leadership. Ordained a priest in 2018, Father Hebert is leading 22 seminarians currently in formation.

“Well, it’s a privilege,” Father Hebert said. “They used to be my seminarian brothers and then to become the vocation director and watch them cross the finish line and be with them to support them, it's just a humongous privilege; not many people get to do that. But I'm so proud of them, they're going to be amazing priests. They've been through a lot together and the future looks very bright for them.”

Throughout the ordination, Father Nieto, 32, wiped tears from his eyes, including after receiving a hug during the sign of peace from Father Juan Guido, the ordination’s master of ceremony and newly appointed pastor of Christ the King Church in Little Rock.

“I just told him that he made it. And that I'm very happy for him. A long road, but we are here,” said Father Guido, who vested him along with Father Emmanuel Torres of North Little Rock. “He brings to the priesthood I think his kindness. His care for the people and a sense of humor as well.”

Father Nieto moved to Springdale from Querétaro, Mexico, with his mother Maria del Carmen Nieto Bautista when he was 15.

“The words cannot be expressed, but it’s a great feeling, a sense of awe-ness and powerful intensity it brings with it,” his mother said through translator Father Guido. “Everything was a powerful moment, but the most powerful thing when he was dressed with (his) chasuble and stole.”

At the time, coming to the United States was a begrudging move for Father Nieto, but after joining the youth group at St. Raphael Church in Springdale, his heart grew open to the faith. A large group of those youth group friends attended the ordination.

“I think he’s going to be a really great priest. Amongst all our group of people, he's always been like the most active and always smiling and happy, and he's always been the one that's also ground us together,” said Itzy Galván, a parishioner at St. Raphael Church. “So I'm pretty sure he’s going to be one of those priests that you can go to, and he’ll give you the best advice that you just need to hear.”

At an Encuentros de Promoción Juvenil (EPJ) retreat, the signs that God was calling him to the priesthood became clear. After the ordination, Father Nieto laughed, admitting it’ll take him a few days to realize he was really now a priest.

“The very powerful moment was, one of them was when every priest was laying their hands on you and obviously the bishop, and actually the consecration of the hands with oils, that was kind of one of my breaking points there,” Father Nieto said. “And receiving the thoughts from each one of the priests … they're calling me brother. So it was slowly sinking in that I'm a priest. I'm a real priest.”

He will serve the flock at St. Theresa Church in Little Rock as an associate pastor.

Father Wendel, 26, will serve as associate pastor at Father Nieto’s home parish, St. Raphael. One of six children to Dr. Paul and Kathy Wendel, Father Wendel attended Christ the King Church his entire life. He attended CTK school, was baptized, confirmed and received first Communion at the parish. At just 5 or 6 years old, he first thought of becoming a priest, saying last year at his diaconate ordination that the “joy of priests was infectious to me.” He joined the seminary after graduating from Catholic High School in Little Rock, thanks in many ways to his spiritual mentor and former pastor, Bishop Malone.

“He’s one of my sons,” Bishop Malone said.

Christ the King is the parish with the most vocations for the diocese. At one point, there were 11 seminarians from CTK, where Bishop Malone pastored for nearly 19 years until 2020. Ten former parishioners are now diocesan priests, with three more in formation.

“Especially Daniel because I’ve known him the longest, since he was in kindergarten. It’s a day of great joy,” Bishop Malone said, adding Father Wendel will be “a joy-filled priest. And it comes naturally to him. Great sense of humor, loves his people and he got all that from his parents.”

Dr. Paul and Kathy Wendel watched in awe during the ordination, his mother smiling up at him as he shared Communion with congregants for the first time as a priest.

“It’s the most amazing thing in the world. Right now I'm sort of speechless, just overcome with the Holy Spirit and what this means. This journey has been eight years in the making, and he’s just so happy and so ready and it's a very beautiful thing,” Dr. Paul Wendel said.

His wife Kathy added, “It’s hard to put any of it into words. It’s just pure joy.”

Years ago when he was an associate pastor at Christ the King, Bishop-elect Pohlmeier put his Roman collar on a 4-year-old Daniel, hoping that one of the Wendel sons would be a priest. At the ordination May 28, he vested him with his priestly garments.

“I've been in touch with him all along,” Bishop-elect Pohlemier said. “I was able to continue to be a part of that process and pray for his continued growth so it really was a celebration” of “completing the deal,” he said were the words Father Wendel used.

Father Wendel said his feelings were of “grace that you cannot explain in words.”

“Getting to share in my first moment, as the bishop is saying the words, when I get to say them with him and share in the sacrifice of the Lord, and offer myself to the people too in the sacrifice was an incredible moment,” Father Wendel said of the consecration of bread and wine, “because it is the symbol in which I get to participate in now. And it is what I will do for the people soon; now.”