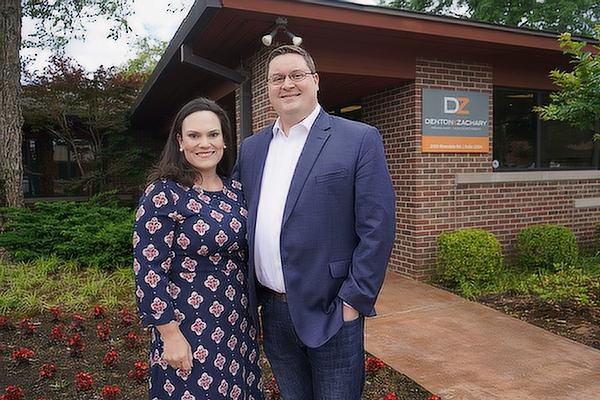 In their 30 combined years in law, Justin and Heather Zachary have heard just about all the lawyer stereotypes — greedy, self-serving, “ambulance chasers,” just to name a few.

But for both of them, being a lawyer is a calling.

“It's never about the money. If it was really about the money, there wouldn't be that many lawsuits,” Justin Zachary said, adding, “But that's the stigma out there. But we're working to change that and I think we are.”

Heather, who was born and raised in the Catholic Church, and Justin, who grew up Episcopalian, attend Christ the King Church in Little Rock with their children Grace, 16, who attends Mount St. Mary Academy, Shepard, 10, and Cecelia, 8, who attend CTK School. Out of their brood, it’s easiest to both spot and hear Heather during a Sunday Mass — she has been cantoring for 15 years.

"Jesus didn't go hanging out around the judges all the time. He hung out with the poor and the sick, right? So I've really taken that on as part of the job.”

“The great thing about cantoring that I have really come to love is that I'm able to use my voice in a way that helps bring the congregation closer to the worship,” Heather said.

The couple, who have been married 11 years, are members of the St. Thomas More society, a Catholic-based, ecumenical organization for those in legal and political professions, and are active in Marriage Encounter of Arkansas, a weekend retreat for married couples.

But long before they had a growing family of faith, their hearts were stirred for justice. Heather, 43, a native of Paragould, grew up in the shadow of her father, retired Circuit Court Judge David Goodson.

“I was a precocious 12, and so very early on, we would talk kind of in broad terms about the things that were going on at his work, and that was kind of where I got really interested in looking at the law as tools and figuring out which tools to pick and how to use those tools to really try to get the best result for your client, but also what is the most fair result here, for all of the parties involved,” she said.

She earned her law degree from Georgetown University in Washington, D.C., in 2004 and worked at one of the largest international law firms, McDermott Will & Emery. She also served as a law clerk for retired Arkansas Supreme Court justice Annabelle Clinton Imber. Today, she is a trial attorney for Reddick Law in Little Rock, working with nursing home abuse cases, and teaches a class called Moot Court, on appellate writing and advocacy, at the William H. Bowen School of Law in Little Rock.

“I have found that part of my legal calling is not necessarily doing direct work with clients, but trying to train the next generation of lawyers to do their jobs better,” Heather said.

As a way to give back, Heather and a few other lawyers founded Legal Babes, a nonprofit that provides $500 scholarships to single mothers or fathers who are pursuing legal education. There have been about 10 to 12 scholarship recipients since its founding in 2006.

“More than that, we also wanted to provide a networking and support system,” Heather said. “And so there have been times in the past that the scholarship recipient had an emergency and needed to go to class and didn't have anybody to watch their kid and I've watched him.”

Justin, 38, a native of Memphis, graduated from Bowen in 2010 with his law degree and has been a partner of Denton & Zachary in Little Rock since 2017, specializing in personal injury and social security disability. He was named one of the Top 40 under 40 in the National Trial Lawyers Association.

Justin said he tries to make a positive impact on others, and that can mean listening or praying together.

“Sometimes clients just need to talk and the thing that they don't prepare you for in law school is how to deal with those issues. But my faith has helped me with that quite a bit. Jesus didn't go hanging out around the judges all the time. He hung out with the poor and the sick, right? So I've really taken that on as part of the job,” Justin said. “So when a dad who has lost his daughter calls me, Saturday afternoon, I'll step away and say, ‘Hey, I gotta take this phone call real quick.’ Because part of it is just being there for someone.”

If he’s busy preparing for a trial on Monday, it’s all the more reason to go to Mass on Sunday.

“The prayers of the people, you get so customary to just respond, ‘Lord, hear our prayer.’ When they say the prayers for the sick, and everything, I’m like ‘Well, that's exactly who I'm representing.’ That's a time where I remind myself of client one, client two,” he said.

While stereotypes about lawyers continue to exist, Heather said she hopes people of faith can understand money is “the remedy” the law provides, but it is more than that.

“It's about closure,” she said. “And it's about providing people an opportunity and the mechanism to move forward from whatever they feel that they have been wronged in their life and so the money is, like Justin said, it can be life changing, and it definitely has an impact. It's not unimportant, but it is not the motivating factor by any stretch of the imagination.”