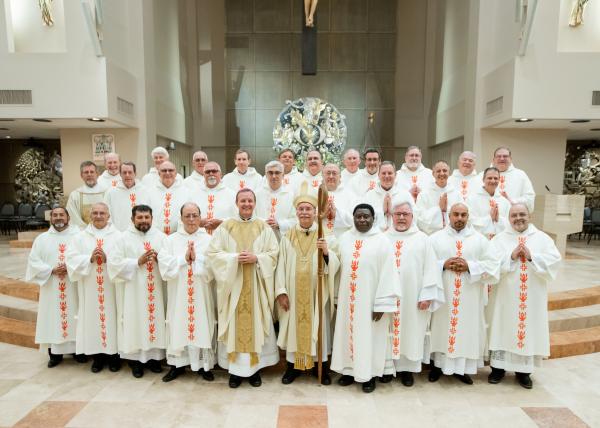 Deacon Garry Boccarossa was born and raised at St. Joseph Church in Pine Bluff. After he was ordained a deacon June 11 with 25 other men at Christ the King Church in Little Rock, he returned to his parish six hours later to assist during Mass and deliver his first homily.

“I’m excited,” he said. “I have been a sacristan for 10 or 12 years, but this is the first time as a deacon. I’ve been practicing homilies all year. This will be the first official one. … I’m excited and ready to get it done.”

Noting his first homily would focus on the trinity for Trinity Sunday, he joked, “Yeah, the easy one.”

Boccarossa said he had been thinking about the day for 15 years.

“You are here because God has called you and because you have heard that call personally in the intimacy of your own heart.”

“I have been ushering and lectoring for years,” he said. “I applied to the last (diaconate formation) class (in 2007), but I didn't get picked. I have been thinking about this every day, 24 hours a day, for 15 years.”

Laying prostrate on the marble floor was the most meaningful point of the Mass, he said.

“Mainly because you are dying to yourself and coming up a new person. I was just happy to be able to get back up,” the 62-year-old said with a laugh.

It was the fulfillment of a six-year journey for the men who discerned, followed by a year of aspirancy and continued throughout the years with a curriculum focusing on the four pillars of academic, spiritual, pastoral and human formation.

The 26 men came from central, south, north central and northeast Arkansas. Another 20 men from the River Valley and northwest Arkansas will be ordained June 25 at St. Vincent de Paul Church in Rogers. There were 35 English-speaking and 11 Spanish-speaking men in the program.

Those ordained June 11 are:

During the Mass, the men made promises to Bishop Anthony B. Taylor to live a life of prayer and respect and obey him.

After laying prostrate before the altar, the men stood up and the bishop laid his hands on each man. Each man chose his pastor or a deacon from his parish to invest him in the vestments of a deacon, a stole and dalmatic.

All deacons present then greeted each of them with the sign of peace.

The men were joined by their wives, who also attended the monthly formation classes and supported them in their vocation.

Among the men, Pesek was chosen to be the deacon of the Eucharist. Deacon Mark Verkamp, who became assistant director of the permanent diaconate formation for the diocese in 2020 and is now the director, said Pesek, 66, was chosen at random from the group.

“He looked like a deer in the headlights,” Verkamp laughed, recalling when Pesek was chosen. “It’s two bishops and a soon-to-be bishop, and 50 some priests and deacons, and you’re up there on the altar. He did great.”

Pesek of St. Edward Church in Texarkana said, “It was overwhelming. I had not told my family so when I went up to the front, my wife knew, but my kids didn’t know and all our friends from the parish, so they were very surprised when I went up. Bishop Taylor is so gracious and made it very, very simple. Father Juan (Guido) was the master of ceremonies, and he was very gracious as well. And Deacon Verkamp is very relaxed. … Everyone was very relaxing and encouraging and I found it to be a very powerful experience.”

Bishop Taylor pointed out in his homily that the men are being ordained just in time for the kickoff of a three-year Eucharistic Revival on the feast of Corpus Christi.

“The goal is to renew the Church by enkindling a living relationship with the Lord Jesus Christ in the Holy Eucharist — and you deacons are to be agents of that renewal,” he said. “You are here because God has called you and because you have heard that call personally in the intimacy of your own heart.”

Concelebrating was Bishop Francis I. Malone of Shreveport, who was formerly the pastor to seven of the new deacons assigned to Christ the King Church in Little Rock. Bishop-elect Erik Pohlmeier was the director of deacon formation for six years, preparing the 46 men for ordination.

At the end of the Mass, Bishop Taylor made a point to recognize the bishop-elect’s service to diaconate formation in the diocese. Bishop-elect Pohlmeier will be ordained the bishop of St. Augustine, Fla., July 22. The June 11 and 25 ordinations were among the last official duties he will undertake as a priest for the Diocese of Little Rock.

Bishop Taylor said the formation director wrote letters to him about each man, explaining their gifts and their readiness to serve the diocese.

“He knows you so well,” the bishop told the new deacons.

For the Jonesboro deacons, they have followed a similar path in both career and faith. Deacon Marty Huss, who will serve at Blessed Sacrament Church, has been an associate professor of botany at Arkansas State University for 29 years. Deacon Bob Bennett, who will serve at St. John Newman University Parish, retired as an associate professor of botany at ASU in 2018, working with Huss for 25 out of his 27 years at the university. Huss met his wife, Betsy, while she served as campus minister, and the two have been married 28 years and have two children.

Throughout the years, Huss and Bennett worked, taught classes together and grew to be friends. In 2011, Bennett and his wife Karen converted to Catholicism, with the Huss’ serving as their sponsors.

“Marty and I were longtime colleagues, and we had lots of chats about science and religion over the years and I just became more and more interested in Catholicism and I asked Marty more and more questions, and it just progressed from there,” Bennett, 71, said, adding that his new role as a deacon at the university is “a wonderful transition to go from talking about science to talking about my faith.”

Huss said God’s plan led him and his wife to the moment of ordination, along with the Bennetts.

“I think what that shows is that a lot of times God, the Holy Spirit, is always working in the background preparing for things that are going to happen in the future that you wouldn’t have anticipated,” Huss, 61, said. “... I believe God has a plan and had a plan and was very gentle in permitting me to have the kinds of experiences that would be formative spiritually when the opportunity came to inquire about me becoming a deacon, to explore that possibility for myself. Myself, and my wife too, were both receptive to that opportunity.”

Deacon Ramon Argueta, 51, gave his first homily to parishioners at St. Joseph Church in Conway the day after his ordination, reflecting on Bishop Taylor’s directive that what they speak must be taken to heart first.

As the only deacon for the Latino community in Conway, the El Salvador native spoke from his heart about God as a Father.

“A lot of people like myself, I did not grow up with my father, he went to another family. I know a lot of people are like that,” Argueta said. “But yesterday Jesus mentioned he’s God, everything that he has is his, and everything he has is his Father. So it shows us a good relationship with his Father … so my homily was to consider God like the father we don’t have. He can be a father to us in every way.”

Many deacons will be a welcome addition to parishes in the diocese needing extra help. Robert “Bob” Wochner, 68, will serve at St. Peter the Fisherman in Mountain Home. Pastor Father Norbert Rappold will be the only priest for the parish, as associate pastor Father Jayaraju “Raj” Sure has been assigned associate administrator of St. John Church and St. Leo the Great University Parish in Russellville July 1. The parish currently has one other deacon, Bob Crawford. Even before ordination, while both parish priests were on retreat, Wochner received a call to visit parishioner and friend, Josephine Lochner, 91, on June 8, before she died.

“She already had the sacraments. But I went and was able to pray with her and read the Scripture. She passed about eight hours later. But the family was so thankful” that someone could be there to pray with her, Wochner said, who will serve at her funeral June 16.

Admittedly, before formation, Wochner said he and his wife Katie were “both very strong alpha personalities,” given their careers in law enforcement and as a paramedic and ER nurse, respectively. In formation, “they showed us we needed to change that attitude and be more toward the servant,” he said.

“Our lives have changed forever,” Wochner said. “I said after the ordination, ‘This is the first day of the rest of our lives.’”