With newly formed entity, donors can help a parish, school or Catholic organization 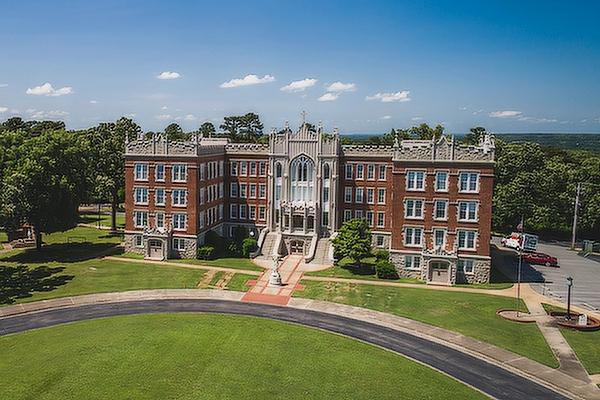 Travis McAfee
The St. John Center in Little Rock will be home to the newly created Catholic Foundation of Arkansas, which allows donors to provide ongoing financial support to Catholic charitable, religious and educational causes.

Travis McAfee
The St. John Center in Little Rock will be home to the newly created Catholic Foundation of Arkansas, which allows donors to provide ongoing financial support to Catholic charitable, religious and educational causes.

Bishop Anthony B. Taylor announced the establishment of the Catholic Foundation of Arkansas. The foundation, which is a separate legal and canonical entity from the Diocese of Little Rock, now provides a way, separate from the diocese, for donors to provide ongoing financial support to Catholic charitable, religious and educational causes primarily in Arkansas.

Although the Catholic Foundation of Arkansas is relatively new, it is common for states to have a Catholic foundation separate from the dioceses. By pooling their collective resources, donors can leverage their investments.

“During my time as a priest in the Archdiocese of Oklahoma City, I saw firsthand the benefits provided to schools, campus ministry, Catholic charities and many other worthy causes by the Catholic Foundation of Oklahoma,” Bishop Taylor said. “I served on the board of directors for several years and have wanted to establish a similar foundation within the Diocese of Little Rock.”

Bishop Taylor said some existing trusts or endowment funds might eventually transfer their current funds to the new foundation. Since he has been bishop, the diocese has been approached by at least three trusts looking to turn over their funds to a larger foundation. This would free those trusts from all the associated accounting, distribution and tax filing duties while continuing to support the current beneficiaries. The Diocese of Little Rock had no way to respond to such requests until now.

Diocesan finance director Greg Wolfe said, “We have a way for people to give permanent gifts for seminarian education through the Diocesan Seminarian Fund. And we have a vehicle to receive gifts to care for our senior priests with the Clergy Welfare Fund. But the Catholic Foundation of Arkansas will allow donors to support any Catholic parish, school or other ministry operating within our diocese.”

The board of directors currently consists of Bishop Taylor; Wolfe; Dennis Lee, chancellor for administrative affairs; and Deacon Matt Glover, chancellor for canonical affairs. They envision creating committees of volunteers focused on different areas, such as investing and fundraising. Paid staff might someday be added to operate the foundation, but for now, the foundation will be overseen by the diocesan finance office.

As it grows, the diocese will make more information available through dolr.org, social media and other communication channels. Those seeking additional information should contact Wolfe at (501) 664-0340 or .