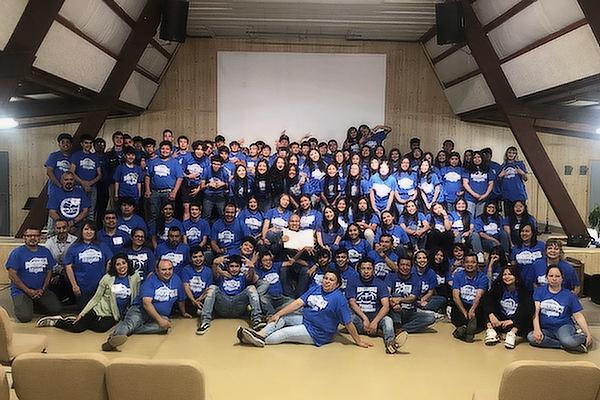 courtesy of Serio Torres
Nearly 90 teenagers, ages 13 to 17, came from all over the state as well as a from Louisiana and Tennessee for the first-ever youth retreat May 27-29 hosted by Fuerza Transformadora.

courtesy of Serio Torres
Nearly 90 teenagers, ages 13 to 17, came from all over the state as well as a from Louisiana and Tennessee for the first-ever youth retreat May 27-29 hosted by Fuerza Transformadora.

When one teenage boy walked into the first-ever youth retreat hosted by Fuerza Transformadora May 27, leader Serio Torres said the young man was hostile.

“There was this kid who said, ‘I don’t believe in God. I don’t want to know anything about God.’ That’s when he came on Friday,” Torres said.

By Saturday, he was laughing and hanging out with his fellow retreatants. On Sunday, the teen shared a testimony about how much he loved the “Transforming Force” retreat.

“After Mass he was waiting for me outside, and he said, ‘I want to say something.’ ‘OK, tell me.’ He said, ‘I want to say sorry about what I said when I came to the retreat. Because I didn't know what I was saying and now I know that Jesus does exist,’” Torres shared, adding he said he’d be attending the next retreat this summer. “He said, ‘I would like to learn more about Jesus and help others.”

"Since its founding in 2006, Torres has led Fuerza Transformadora, which ministers to people who struggle with addiction and violence, to learn how God can change their lives."

He was one of 89 teenagers, ages 13 to 17, who came from all over the state as well as a handful from Louisiana and Tennessee, to attend an Hispanic youth retreat focused on sharing about their struggles and listening sessions led by Torres.

Since its founding in 2006, Torres has led Fuerza Transformadora, which ministers to people who struggle with addiction and violence, to learn how God can change their lives. Currently, there are six retreats each year, as well as weekly meetings in Rogers, Springdale, Conway, Little Rock, Texarkana, Hope and De Queen. A large component of the ministry at the time was outreach to gang members, a life Torres knew well as a former gang leader in California. He found Jesus’ presence after a release from a Rogers jail that changed his life.

Today, Torres said not many leaders of the Fuerza Transformadora groups in the state understand how to minister to gang members. The organization pivoted to focus on people who struggle with addictions and violence.

Thanks to a $50,000 grant, Torres is creating a youth component to Fuerza Transformadora. There will be retreats and a group of Hispanic teens in Holy Spirit Church in Hamburg began meeting weekly June 15.

The weekend retreat, held at Camp Beaverfork in Conway, consisted of activities, praise and worship, Mass at the camp by Father Tony Robbins, pastor of St. Joseph Church in Conway, and Mass the final day at St. Joseph at the noon Spanish Mass, as well as testimonies from retreatants. Cost was $90 per person.

Torres led all the talks, which included his own personal story and discussions about the seven deadly sins. Torres said the retreat was different from other youth offerings because they waited until the final day to discuss how Jesus walks with them on their journey.

Valeria Mares, 14, a parishioner at St. Theresa Church in Little Rock, who will attend Mount St. Mary Academy this fall, said she attended the retreat because her father, newly ordained Deacon Juan Mares, recommended it. She said this retreat was different in that the leaders spoke on their level and gave them a space to discuss their struggles in an honest way. Mares said, from her perspective, culturally, “Hispanic or Mexican parents don't realize about mental health until it’s brought to their attention.”

“I’ve struggled with depression and anxiety for a really long time and after (the retreat) I told my parents I was suicidal, it lifted this weight off my chest because I didn’t have to hold onto it any longer. … I was scared at first to tell them, but at the end of the retreat we had a testimony part. I decided to build up the courage even though I was shaking a lot, I went and told them,” during the testimony, Mares said. She said the retreat helped her see how much she is loved.

Torres said the retreat is a good opportunity for Hispanic teens to learn how to listen and share, and bring those tools home.

“(Parents) say, ‘You have to do this’ and that’s why they hate church. They have to sit down with them and hear what they think, what are their thoughts because from our culture, the thing is sometimes your voice doesn't count when you want to say something … (it’s) ‘Don’t say that. I’m an adult,’” Torres said. Following the retreat, he received a call from one mother who thanked him for his work with her son.

“He told her ‘You know, I learned this at that retreat. We have to sit down and I want to share something. This is what I think. So what do you think?’” Torres said.

The next retreat will be held July 22-24 at St. John Center in Little Rock. For more information, email .