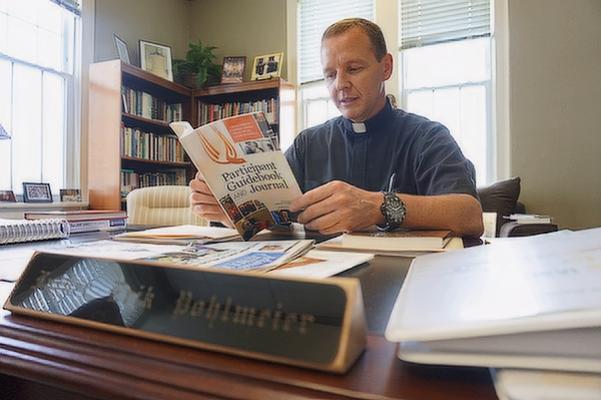 Aprille Hanson Spivey
Bishop-elect Erik Pohlmeier reads materials in his Little Rock office in September 2018 related to programs he brought to the diocese that year as then director of faith formation for the diocese: Called and Gifted Workshops for individual parishioners and Ananais Training for ministry leaders and volunteers.

Aprille Hanson Spivey
Bishop-elect Erik Pohlmeier reads materials in his Little Rock office in September 2018 related to programs he brought to the diocese that year as then director of faith formation for the diocese: Called and Gifted Workshops for individual parishioners and Ananais Training for ministry leaders and volunteers.

When Bishop-elect Erik Pohlmeier was appointed the diocesan faith formation director in 2016, he made it his priority to listen, traveling to all parishes in the state throughout a two-year period. He researched and worked to understand the needs of each parish and the diocese as it related to the larger, national picture.

What resulted was a 14-page “Report on the State of Faith Formation” he presented to parish leaders in 2018. His passion for evangelization will continue to shape the lives of Catholics in the state for years to come.

“It’s going to have an impact on the growth of the Church in Arkansas,” said Jeff Hines, who worked with the new bishop as an assistant faith formation director and now has succeeded Bishop-elect Pohlmeier as the director. “So it’s kind of like the Gospel of Mark that says that the kingdom of God is like a man who sows seeds in the land, goes to sleep and the seeds sprout later, he knows not how,” pointing to Mark 4:26-27.

“He doesn’t go very long without quoting ‘The Joy of the Gospel.’ … He’s really soaked in that encyclical of Pope Francis, which is about evangelization. One of his phrases” he used, even during his press conference announcing his election as bishop, “He said knowing Christ sets us free from ‘sin, sorrow, inner emptiness and loneliness.’ That’s on page one.”

The report pointed out the common issues facing parishes, including the most common one of people feeling “disconnected from parish life,” something that undoubtedly increased after the COVID-19 pandemic.

“If we follow the model of Jesus, the first thing he did was call people. The second thing he did was bring them close to him, and only then did he send them out. So we’re calling people and sending them out, but we’re skipping the step sometimes of bringing them closer to Jesus,” Bishop-elect Pohlmeier said in 2018 about the report.

It’s a concept that goes back to Jesus’ initial calling of his 12 apostles, but it has fallen out of the norm for parishes, replaced commonly with structured education, programs and sporadic parish faith formation events.

The report and meetings with Bishop-elect Pohlmeier gave parish leaders like Christy Trantina, adult faith formation director for St. Joseph Church in Conway, a vision for the future.

“He said the direction the diocese is now going to take is evangelization, and we all just kind of thought, ‘We’re willing, but we don’t know how. We’ll do whatever you tell us but need some guidance here,’” she said.

And he did, meeting with faith formation, catechetical leaders and directors of religious education from the diocese’s Central Deanery to explain how they could implement the idea of evangelization into their parishes, something he did with any parish who needed more guidance.

“This had the biggest impact on me personally and our group. He made it a priority to meet with us almost weekly for almost a year. … We worked through a series of materials he found that culminated with a series on evangelization,” Trantina said. “He took the time to mentor us personally, and he is such a gifted teacher as anyone who knows him knows. … We learned from the best. He formed us, and we were able to take that back to our parishes.”

Molding the next steps

Trantina said while she was initially skeptical about the idea of evangelization and how it’d work, the bishop-elect emphasized it isn’t a quick process.

“Anything I do, evangelization is woven into it. Bishop-elect Erik really helped me see that it's one thing to attend a course, attend a Bible study, take steps to grow spiritually, but there is a further step and a next step, and that’s to share your faith with other people,” she said. “We aren’t born knowing how to do that. We have to learn that, and I learned that from him.”

Bishop-elect Pohlmeier has also championed discipleship training programs like Called and Gifted and Ananias Training. Using curriculum through the Catherine of Siena Institute, the classes help a person learn about their charisms, unique gifts from the Holy Spirit, and to bring those to all areas of our lives. The Ananias Training was targeted for ministry leaders and volunteers.

Father Mauricio Carrasco leads several parishes in the River Valley, pastoring St. John Church in Russellville, St. Augustine Church in Dardanelle and St. Andrew Church in Danville. He now shepherds the Church of the Assumption in Atkins in addition to the Dardanelle and Danville churches. With limited time to research the best practices for faith formation, Father Carrasco said he’s grateful that Bishop-elect Pohlmeier took the time to do the often “painful” part of research, attending national conferences and bringing the diocese up to speed on the national conversation surrounding evangelization.

“I responded to everything he was doing and was really grateful he was able to do so much — taking the time to listen to each parish. ‘Man, this guy is not just bringing a program.’ He has thoroughly done the research, thoroughly listened to where our diocese is and putting it together, ‘OK this is what I hear nationally and on a diocesian level.’ … Nobody provided a magic solution. He helped insert our own challenges into a wider narrative and it helped give us perspective.”

Over the course of about a year, Bishop-elect Pohlmeier invited Father Carrasco and a handful of other young priests to discuss faith formation and attend conferences like Steubenville to learn more about modern faith formation training.

Father Carrasco said he’s already seen the fruits from the different approach in his parishes, from a more mentoring-based, personal RCIA process, intergenerational faith formation where the parents are more involved with their child’s faith formation, focusing on the Gospels and strengthening family prayer.

“It gives me security whenever I present a different approach. Here’s the thing, Bishop-elect Erik Pohlmeier is also very innovative, and he wasn’t afraid to try new things,” he said.

Innovative, but deeply rooted in Catholic tradition is what Sam Denefe, who Bishop-elect Pohlmeier hired as evangelization director while serving as pastor of Our Lady of the Holy Souls Church in Little Rock, brought to faith formation.

Denefe said he was committed to listening to his staff, including ways to build their prayer life. They worked together to make sure each Holy Souls staffers had time every day to pray in front of the Blessed Sacrament.

“What makes him different is he obviously has a commitment to prayer and sacrificing, fasting and the sacraments and goes above and beyond what is required; and he’s willing to help other people do those basic things,” Denefe said.

Hines said because of Bishop-elect Pohlmeier “the way is paved” for how to look at faith formation.

“Everyone knows that family faith formation is what we need to be working on. He has quoted many times that parents are the first influence on their children. ‘A parent that lives the faith is the No. 1 factor on whether a young person stays in the faith. And there is no No. 2. It’s the one,’” Hines shared.

Pope Francis’ 2013 Apostolic Exhortation “Evangelii Gaudium” (The Joy of the Gospel) has been a profound influence on Bishop-elect Pohlmeier and the way he approaches faith formation, Hines said.

“He doesn’t go very long without quoting ‘The Joy of the Gospel.’ … He’s really soaked in that encyclical of Pope Francis, which is about evangelization. One of his phrases” he used, even during his press conference announcing his election as bishop, “He said knowing Christ sets us free from ‘sin, sorrow, inner emptiness and loneliness.’ That’s on page one.”

Like a sower of seeds, Bishop-elect Pohlmeier’s impact on faith formation will continue to grow, Hines said.

“The biggest one is there's no time frame,” Hines said of the lesson he learned from Bishop-elect Pohlmeier. “It’s God's work. … It’s more about what God is doing and are we being attentive to that and obedient, and not just trying to run a program and trying to make it look good. We’re trying to really help people encounter Christ and how to be disciples.”