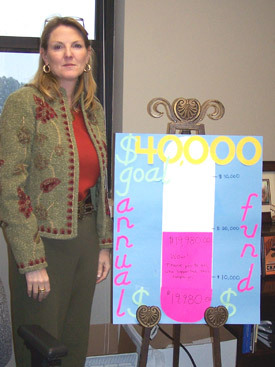 Sandra Ware
Kerry Hornibrook, new development director at St. Joseph School in Fayetteville, stands with a display board for the school's annual fund. It illustrates how far the school has come toward its goal of raising $40,000 toward general operating expenses this year.

Sandra Ware
Kerry Hornibrook, new development director at St. Joseph School in Fayetteville, stands with a display board for the school's annual fund. It illustrates how far the school has come toward its goal of raising $40,000 toward general operating expenses this year.

In a push to bridge the gap between operational cost and tuition, many schools throughout the Diocese of Little Rock have added a development director to their staff.

Six of the state's 32 Catholic schools now have full-time development directors. These include St. Joseph in Fayetteville, Immaculate Conception in Fort Smith, Subiaco Academy in Subiaco, and Catholic High, Christ the King and Mount St. Mary schools in Little Rock.

St. Edward in Little Rock recently organized a development committee while St. Joseph in Conway has had a director for its endowment fund for many years.

With the cost of education on the rise, there is a great need for fundraising, especially because Catholic schools are privately funded, said recently hired Kerry Hornibrook. Hornibrook said she views her position as more than just fundraising for St. Joseph School in Fayetteville.

First on Hornibrook's list of things to do after becoming the development director last August was to establish a healthy working relationship with the local newspaper. The effort has yielded nine published articles, one of which was on the success of the school's Panther Club project, which gained the attention of television's Hallmark Channel.

Another way Hornibrook has kept St. Joseph's "name out there" was by developing an annual fund drive. So far, more than $22,000 has been raised for the school's general operating expenses. The annual goal is $40,000.

Hornibrook said the three goals of the fund are to assist with tuition scholarships, provide for the best in classroom technology and make teacher salaries more competitive with those in public schools.

Hornibrook said she is currently planning a men's night fundraiser scheduled for April 26. During the event, autographed footballs, basketballs, Razorback tickets, Chicago Cub tickets, sporting equipment, vacations and other items will be auctioned off in an effort to reach the $30,000 goal.

Since coming on board, Carter said her top priority has been bringing awareness to the school's alumni association. The mission behind the association is to supplement teacher salaries and raise money to assist with tuition, because no student is denied admission because of financial need.

"Right now we haven't had any fundraisers," Carter said. "We're trying to get the alumni on board and in touch with the school. Then we'll reach out to the community."

Before coming to Catholic High, Carter was a grant writer for Baptist Health Foundation, University of Arkansas for Medical Sciences and Museum of Discovery. Carter said being Catholic High's development director is the chance of a lifetime.

"There is so much potential to bring awareness of the school. There are a lot of people who still don't know the foundation is here," she said.

Immaculate Conception School in Fort Smith hired its first development director, Sherry Scorby, at the beginning of the 2005-2006 school year.

Scorby said she defines her role as strengthening and fostering relationships between the school and its supporters, including school families, parishioners, alumni and grandparents, extended families and the surrounding community.

Earlier this month, two other schools hired development directors. They are Subiaco Academy and Abbey and Christ the King School in Little Rock.

Ken Sutterfield is now the chief development officer for Subiaco Academy. His primary responsibilities include the organization, planning and management of all development efforts. Father Richard Walz, OSB, present development director, will retain that title and the two will work closely together. Sutterfield has 30 years of non-profit experience, including directing Christian camps and conference centers in Arkansas and Texas. He most recently served as dean of operations for a kindergarten through 12th-grade private school in Little Rock.

Jennifer Murdaugh is Christ the King's development director. In a letter addressed to parents, Murdaugh said she is "very excited" to be joining the faculty and staff and has "many great ideas" concerning marketing for the school and increasing the Msgr. Hebert Endowment Fund.

Murdaugh attended Immaculate Conception School and is a 2002 Mount St. Mary Academy graduate. She holds a bachelor's degree in advertising and public relations from the University of Arkansas.

Jacqueline Kordsmeier came on board as executive director of the fund in January 2003 and Betty Schichtl has served as development assistant since April 2001. Founded in 1976, the endowment fund is a nonprofit fund established to provide financial aid and support for St. Joseph School.

All contributions to the endowment are placed in a variety of investments and the interest earned is used to supplement teachers' salaries, provide financial aid and buy equipment.

For St. Edward School in Little Rock, the decision to implement a development council came somewhat by accident.

The council's mission is to assist the pastor in raising funds for the future of the parish community through a program of planning, public relations and charitable giving.

Robert Hall serves as council president. Hall said the council was originally organized to raise funds for a $3.2 million building project for a multi-purpose building that will include a science lab, computer lab, three classrooms and a common area with a bridal room, nursery and bathrooms.

"This is quite a significant project," Hall said. "We had just about exhausted our resources and the consultant firm we had hired suggested a development council to reach out to the community for contributions."

Hall said the response was tremendous. "The support of the business community, many of whom are non-Catholic (and) just want to promote the love of Jesus Christ, has been great," Hall said. "We've had generous support from non-parishioners. Instead of temporary, like originally intended, the council will be permanent. Once we retire the debt on the building we'll focus on funding other programs at the school."

In order to "zap the gap" Mount St. Mary Academy in Little Rock has had a department of development in place for several years.

Carolyn McCone took over as director in 2004. Previously McCone did marketing for the United Way for 12 years, spent 11 years with the St. Vincent Foundation and two and a half years at the UAMS Donald W. Reynolds Institute on Aging.

McCone said MSM has some fundraising events but lists its main focus as planned giving, estate planning and charitable giving.

"The biggest reason people don't give is because they are not aware of the need," McCone said.

McCone said the difference between MSM's tuition and the total cost of educating each student is about $2,000.

"We've got a terrific development office," McCone said. "Three of the four are alumni and the other has had four daughters attend Mount St. Mary. It makes for a great development team. I'm just one person of that team."

In addition, McCone said "It's important to have volunteers and alumni involved and more focus on giving."

"The key is for small schools to do something. They may not be able to afford a director or full-blown staff, but they need to do something to bridge the gap between tuition and the cost of education. No one is going to know there is a need if you don't inform them," she said.