Bishop-elect described as an advocate, wonderful witness to life and human dignity 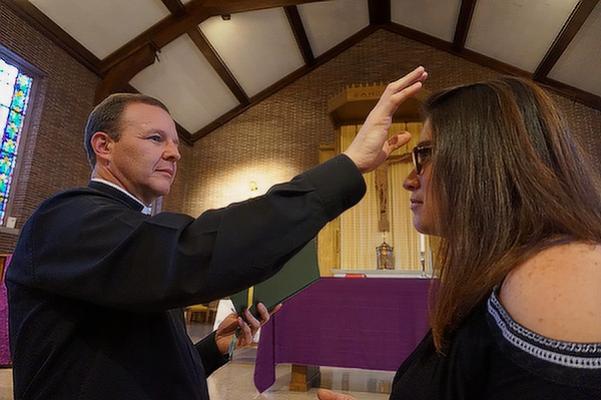 Aprille Hanson Spivey
Bishop-elect Erik Pohlmeier, in his role as diocesan director of faith formation as well as theological consultant to Arkansas Catholic, demonstrates the blessing that takes place during the anointing of the sick with Jasmine Hogan to illustrate a newspaper feature on the healing sacrament in February 2018.

Aprille Hanson Spivey
Bishop-elect Erik Pohlmeier, in his role as diocesan director of faith formation as well as theological consultant to Arkansas Catholic, demonstrates the blessing that takes place during the anointing of the sick with Jasmine Hogan to illustrate a newspaper feature on the healing sacrament in February 2018.

While Bishop-elect Erik Pohlmeier was a seminarian in the 1990s, he called Anne Dierks, then the diocesan respect life director.

“He called me at the diocese and said, ‘I am a seminarian at St. Meinrad’s. There is no pro-life information up here, can you send me some?’” she said.

In 2008, he reached out to the Couple to Couple League, an international nonprofit that promotes the Church teaching of natural family planning, to join its board of directors.

“Father wrote a letter to Couple to Couple League one day saying, ‘I’m interested in helping,’” said CCL chairman and former executive director Mike Manhart of Cincinnati. “He was proactive about it.”

"He’s just done so much across the board. I think his very wonderful witness to life and human dignity in general as a priest has allowed him to reach people in so many different ministries in so many different ways … You felt he was making Christ present to you. I’ll always remember that about him.”

Pro-life efforts have been a priority for Bishop-elect Pohlmeier not only throughout his 24 years of priestly ministry, but a calling within his calling, and encompass a variety of pro-life aspects. Even at the press conference announcing his appointment May 24, the baby feet pin, a popular pro-life symbol, was fastened to his lapel.

Catherine Phillips, diocesan respect life director, said he has consistently participated in prayer campaigns like 40 Days for Life and advocated for a consistent ethic of life.

“He’s really an advocate for human dignity and respecting people every day,” Phillips said. “... He’s just done so much across the board. I think his very wonderful witness to life and human dignity in general as a priest has allowed him to reach people in so many different ministries in so many different ways … You felt he was making Christ present to you. I’ll always remember that about him.”

Dierks, who founded the Project Rachel post-abortion healing ministry in the Diocese of Little Rock, became “fast friends” with Bishop-elect Pohlmeier even before his 1998 ordination. His heart for pro-life issues made him a perfect priest, among others, who helped offer Mass and confession during Project Rachel retreats.

“The ladies loved him,” Dierks recalled. “He was just a gentle spirit, and they went to confession for the first time in who knows how many years and he was a great instrument in their healing. ... He wanted the mothers of those babies that were lost to feel the forgiveness of the Lord.”

And time was not an issue, spending three or more hours at the retreats, being there for those who needed him, Dierks said.

“He had the most beautiful homilies. John’s Gospel of the adulterous woman, when he said, ‘Neither do I condemn you,’ they really felt it. It’s just such a beautiful moment he brought to them,” Dierks said. “His spirit comes through in what he says and the way he does it. He was a gift to the ladies of Project Rachel in a very special way, and to me.”

With as much care and compassion as he’s displayed for mothers in need of healing, Bishop-elect Pohlmeier has a heart for setting married couples and their future families up for success by promoting natural family planning, a Church-approved way of intimacy to help couples become pregnant or delay pregnancy, without the use of contraception.

Though NFP classes were offered in the Diocese of Little Rock since the 1980s, Bishop-elect Pohlmeier along with family life director Elizabeth Reha spearheaded a campaign in 2010 to make it a requirement for marriage preparation. At the time when it was implemented in 2012, only eight other dioceses in the country had made that a requirement.

The role of families

“I would say that he was such a great supporter and spiritual guide for us during the time of our teaching formation,” Erin Boelkens said. “... I would say if I had to sum up Bishop-elect Erik, I’d say he is a very fascinating person, fascinating and accessible. It never felt out of reach to invite him to whatever we were doing. He’s easy-going and easy to talk to. He’s so supportive of families and so good with children. He’s constantly stressing the importance of the role of family in the Church. It’s what he believes, not just what he preaches.”

Manhart witnessed it first-hand as Bishop-elect Pohlemier served on CCL’s national board for eight years.

“He was a very active participant in the board and brought a lot of good insight. He was one that always had a perspective offered during a critical discussion,” which led other members “in a unifying direction that ended up being the right thing to do,” he said.

In one of the videos, Bishop-elect Pohlmeier explains our call to love as God loves in his image, explaining this concept of “his image” in a relatable way: “Think of a mirror and think of yourself brushing your teeth in front of that mirror. When you brush your teeth and face the mirror, the image in the mirror brushes its teeth. So now imagine that God is looking in a mirror. What, or who, would he see in the reflection? He would see all of us since we’re created in his image. So just as the image in our mirror in the morning does what we do, combs its hair, brushes its teeth, so we should always do what God does. That’s what it means to be an image of God, and that’s what it means to be a human person.”

Manhart said the series is still presented today to every class, equaling about 5,000 to 6,000 couples annually.

“I think it’s had a significant impact. We often joke that NFP is kind of a gateway to understanding your Catholic faith. Some of the other stuff the Church teaches begins to make some sense,” Manhart said, so the videos go beyond just understanding God’s plan for marriage.

During Bishop-elect Pohlmeier’s tenure, which ended in 2016, Manhart said the board created an online version of the class and a national online registration platform.

“While Father was on the board, many innovations that moved us into the 21st century … he was very strongly assertive in that and really pushed us to do those things,” he said.

Manhart also said Bishop-elect Pohlmeier would visit other dioceses with board members throughout the country about four times a year, always the one to pick out interesting sites to see at each place.

While many will attend Bishop-elect Pohlmeier’s July 22 ordination, it’s been a long time coming for Dierks. Originally supposed to attend his priestly ordination, she said “God had a different plan,” when her daughter gave birth to twins on his ordination day.

“I’ll be out there (in Jacksonville, Fla.), and I’ll be praying for him. It’s very important I be there. He’s a very special man in my life,” Dierks said while holding back tears. “He was always available for me, I don’t know that he ever said ‘no.’ He has it in his heart — he is a purified pro-lifer.”