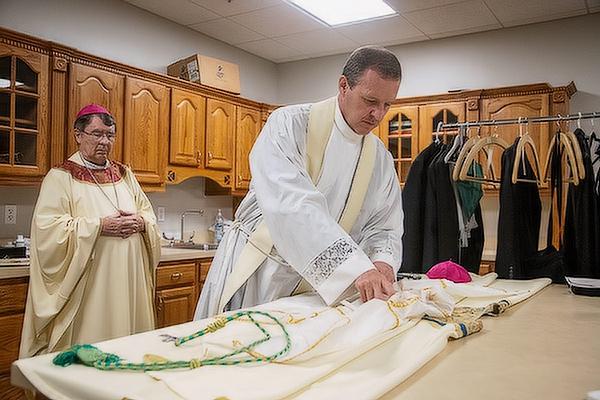 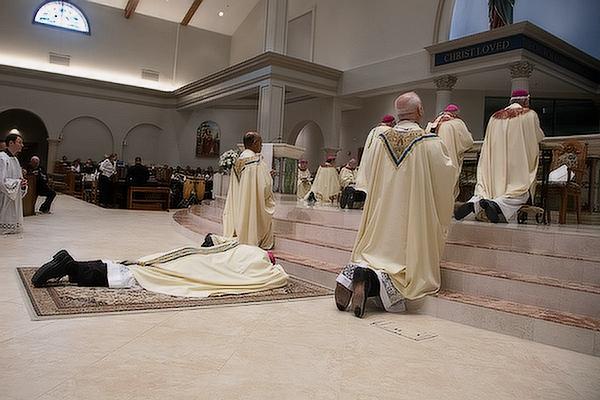 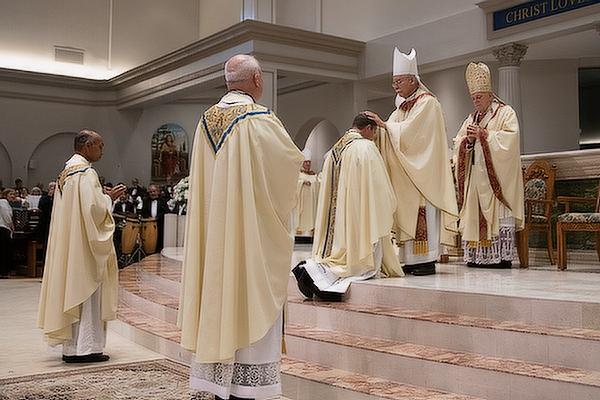 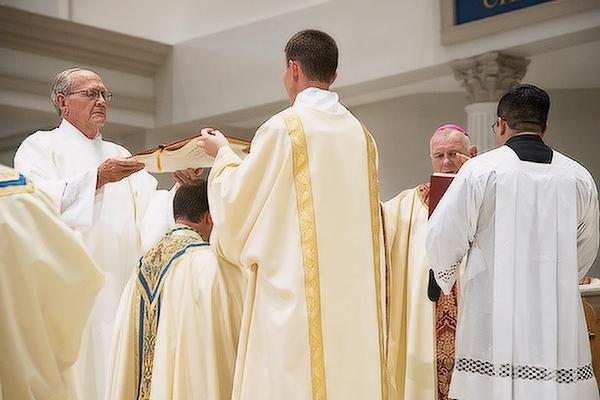 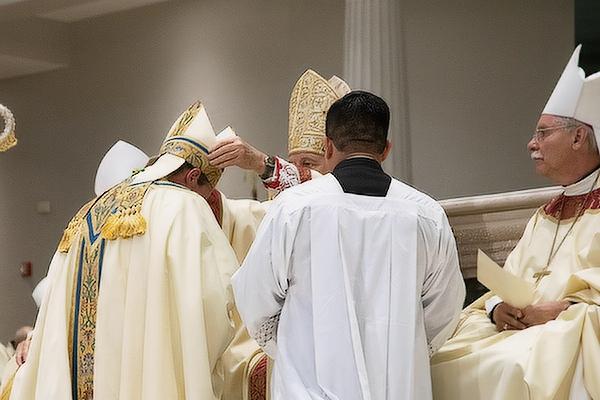 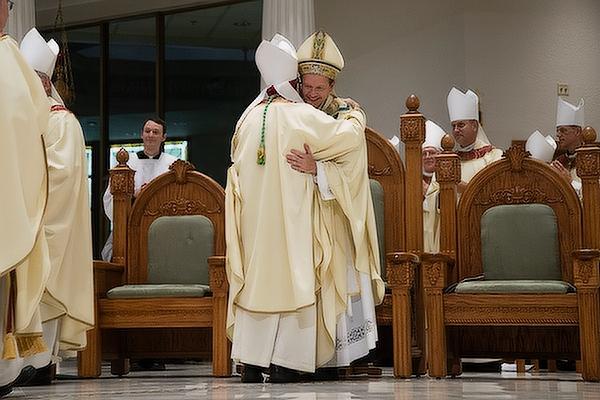 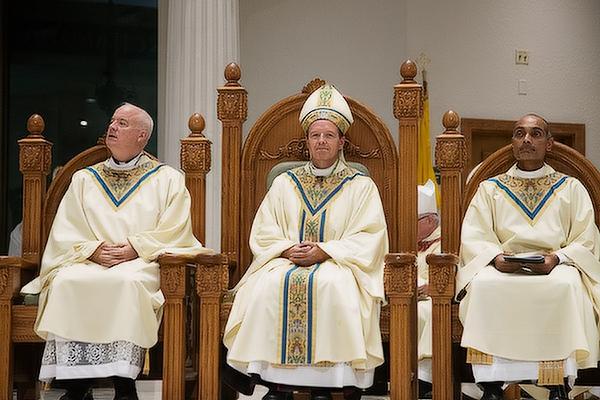 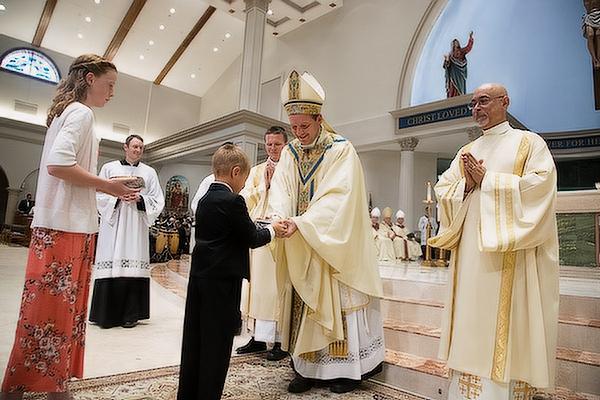 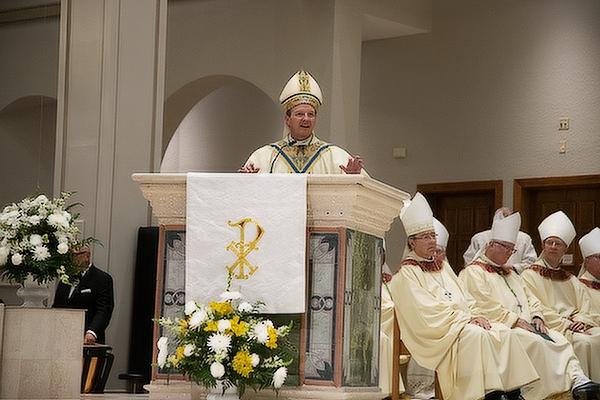 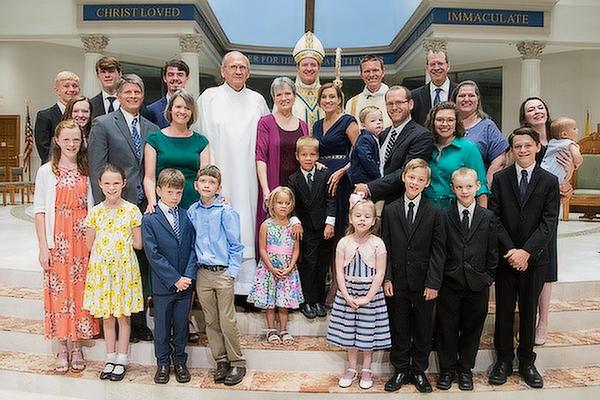 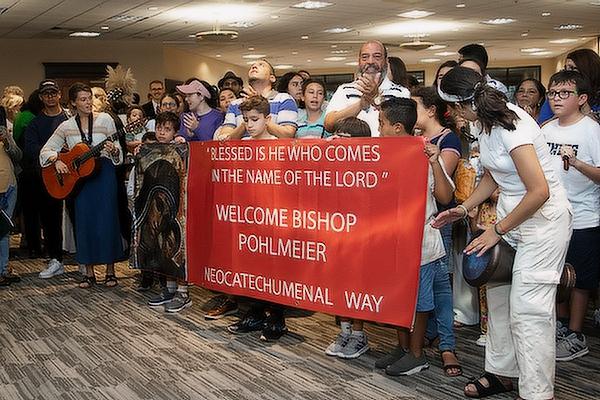 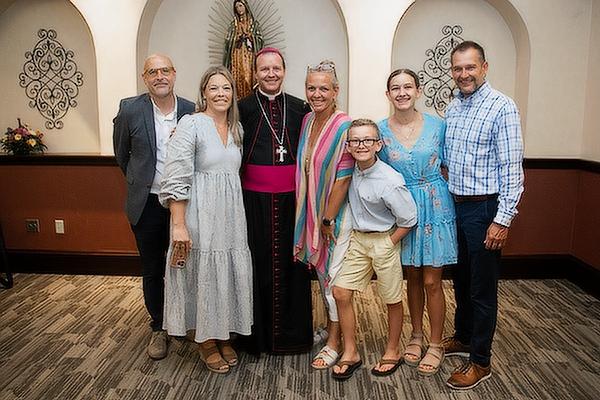 Bob Ocken
Bishop Pohlmeier accepts the gifts from his niece, Rose, and nephew, Damien, during the Liturgy of the Eucharist at his episcopal ordination, July 22.

Bob Ocken
Bishop Pohlmeier accepts the gifts from his niece, Rose, and nephew, Damien, during the Liturgy of the Eucharist at his episcopal ordination, July 22.

With a series of “I dos,” Bishop Erik T. Pohlmeier was married to the Diocese of St. Augustine during his episcopal ordination July 22 at St. Joseph Church in Jacksonville.

His parents, Deacon Tom and Sharon Pohlmeier of St. Joseph Church in Paris, and about 40 family members from Arkansas, Texas, Virginia, Florida and Missouri filled the first few rows to watch the Diocese of Little Rock priest be ordained a bishop. Among the 2,250 in attendance were 140 laypeople, 16 deacons, 17 seminarians and 22 priests from the Diocese of Little Rock.

Most recently, Bishop Pohlmeier was pastor of Christ the King Church in Little Rock, diocesan director of faith formation and deacon formation and theological consultant for Arkansas Catholic.

Nineteen bishops from 11 states, including Bishop Francis I. Malone of Shreveport, a former Arkansas priest who was ordained in 2020, also attended, welcoming the newest bishop to the episcopacy.

“As everyone noticed (the archbishop) used a lot and then rubbed it in further,” he said. “The sensation of having the oil run down my head was surprising and beautiful because of the biblical reality of anointing. This wasn’t just symbolic for me. And then, the aroma of the chrism was constant the rest of the day. Beautiful reminder of how my life changed in those few hours.”

Archbishop Thomas G. Wenski of Miami, the ordaining bishop, asked Bishop Pohlmeier nine questions about his public commitment to serve as a bishop, answering “I do” to each one. He laid his hands on the bishop-elect, calling down the Holy Spirit.

Three signs of a bishop are the miter, or bishop’s liturgical headdress, episcopal ring and crosier, or pastoral staff. Bishop Pohlmeier’s silver ring was given to him by a retired bishop. It features an image of the Good Shepherd. His crosier, featuring a small statue of St. Augustine in the crook, belonged to the late Bishop Joseph P. Hurley, who served the diocese from 1940-1967. After receiving the three items, he sat in the bishop’s chair, beaming with a wide smile while the crowd erupted in applause.

The ordination Mass included several connections to the Diocese of Little Rock. Bishop Anthony B. Taylor was one of two co-consecrating bishops, along with the former St. Augustine bishop, Bishop Felipe J. Estevez.

In comments at the end of the Mass, Bishop Pohlmeier said of Bishop Taylor, “I want to thank you for time as my bishop in Arkansas. You have given me an example of what it means to be a fearless witness of Christ for his poor and neglected… You also have shown me what it truly looks like to seek the approval of God and God alone.”

Father John Antony of Fort Smith likened himself to a best man in a wedding, chosen as one of two priest chaplains for Bishop Pohlmeier. Two nephews, Isaac and James Pohlmeir, assisted as altar servers.

Bishop Pohlmeier’s brother, Jason of Fayetteville, was a deacon for the Mass. Their father also participated during part of the Mass when the Book of Gospels is held over the head of the new bishop before he is ordained.

Bishop Pohlmeier, 51, said that moment stood out to him during the 2 ½-hour Mass.

“It was so powerful for me to share that moment with them,” he said. “I had read a reflection from Pope John Paul II pointing out that it represents both my submission to the Gospel but also being protected under the Gospel.”

While a priest’s hands are blessed with chrism oil, during an episcopal ordination the new bishop’s head is anointed.

“As everyone noticed (the archbishop) used a lot and then rubbed it in further,” he said. “The sensation of having the oil run down my head was surprising and beautiful because of the biblical reality of anointing. This wasn’t just symbolic for me. And then, the aroma of the chrism was constant the rest of the day. Beautiful reminder of how my life changed in those few hours.”

Raymond Bertasi of Christ the King Church in Little Rock said he never doubted that he and his wife Leslie needed to attend the ordination Mass.

“We formed a relationship when organizing the St. Joseph Table (in 2021),” he said. “(Being here) is an appreciation for the priests who are appointed bishops. I think we should be there to support them. I know he is going to miss his family so much. There’s no better way to say goodbye than to be here.”

“We had a very difficult time getting pregnant,” she said. “He introduced us to St. Gerard Majella, the patron saint of motherhood.”

When their first child was stillborn in 2000, Bishop Pohlmeier was there for them while they grieved.

“He was both our rocks,” she said. “He’s going to be a blessing for St. Augustine. We’re going to miss him at Christ the King, that’s for sure.”

While family and former parishioners were grieving Bishop Pohlmeier leaving Arkansas, one family member was thrilled with the appointment. Cousin Robin Fecitt, principal of St. Joseph School in Jacksonville, moved to Florida years ago, joined by her parents, sister and family. Her cousin now will work across the street from her school, and she hopes to have him say Mass for her students when school resumes.

“There were several times I was in tears,” she said of the ordination. ”It’s just an amazing process. For him officially being announced coming here, I was just like, ‘I’ve known him our entire lives.’”

Her eighth-grade twin daughters will be confirmed by Bishop Pohlmeier in April.

The Diocese of St. Augustine encompasses 17 counties in northeast Florida and includes Jacksonville, St. Augustine and Gainesville. The diocese holds an important role in American Catholic history, as St. Augustine is the location of the first Catholic Mass in 1565 in what would become the United States.

On Saturday, July 23, about 60 Arkansans toured St. Augustine to learn about Catholic history in the city, visit the Marian shrine of Our Lady of La Leche and attend Mass at the Cathedral Basilica of St. Augustine.