Ugandan priest wanted to be a missionary, has served across Arkansas for seven years 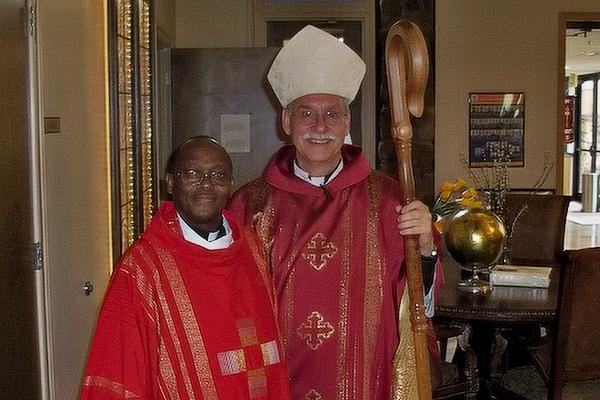 Courtesy St. Richard Church
Father Polycarp Ssebbowa is seen here with Bishop Anthony B. Taylor at the April 21 confirmation at St. James Church in Searcy. Father Ssebbowa will celebrate the 25th anniversary of his priestly ordination Aug. 15. He has held numerous roles in the diocese.

Courtesy St. Richard Church
Father Polycarp Ssebbowa is seen here with Bishop Anthony B. Taylor at the April 21 confirmation at St. James Church in Searcy. Father Ssebbowa will celebrate the 25th anniversary of his priestly ordination Aug. 15. He has held numerous roles in the diocese.

As early as primary school, Polycarp Ssebbowa knew he wanted to become a priest. He mentioned that inkling to his pastor, who became his mentor. He fulfilled his wish on Aug. 15, 1997, when he was ordained a priest in his native Uganda.

Next month, he will celebrate the 25th anniversary.

“I was in second grade, still a child,” he said. “My vocation came early. I went to my pastor who was very kind and good humored. I needed to be like him. That was the beginning. I went to him at Eastertime and said, ‘I want to be a priest.’ He said, ‘Well, Polycarp, be a good altar server, study hard at school and get good marks and be disciplined.’ I went back to him every year at Easter for a review.”

Raised by a Catholic father and a mother who converted to the faith, Father Ssebbowa said many members of his mother’s extended family wanted him to become Muslim.

“I feel like I have done what I was supposed to do, but I have more to give, God willing. I don’t have control over my life, but I am willing and ready.”

“That’s something I opposed so much,” he said. “With help, I was able to make a stand. The opposition had a great, positive impact on me because the more they opposed me, the stronger I grew in my faith.”

Father Ssebbowa attended seminary high school away from home, but civil war in Uganda made it difficult to travel home.

“I became a stranger in my own family,” he said.

Initially, he wanted to be a missionary with the Congregation of the Apostles of Jesus, but his bishop denied his request, preferring him to stay and explore leadership options at home. For the first 18 years of his ministry, he served a variety of roles in the Diocese of Kasana-Luweero.

At an event in Milwaukee in 2012, he met Msgr. Scott Friend, then-vicar general for the Diocese of Little Rock.

“We had a meal together and that started my journey to the Diocese of Little Rock,” he said.

“It felt like the answering to my unfulfilled dream.”

Deacon Matthew Glover, JCL, chancellor for canonical affairs, said the diocese is considered a “mission diocese” because of its small Catholic population and depends on foreign-born priests to serve the faithful.

“Our missionary priests from foreign countries help remind us not only that we’re all ultimately immigrants from other lands but also that we’re all ultimately migrating to our heavenly homeland,” Glover said. “Our foreign-born priests leave behind the comfort and familiarity of their home countries to serve our faith needs.  And it’s our faith that unites us all, despite any differences in language, accent, race or birthplace.”

Father Ssebbowa said the hardest parts of leaving Africa were being away from his family, learning and adjusting to a new culture and the ongoing struggle to communicate with his strong accent.

“I had to miss my family for many years and when my father had to leave the world without seeing him face to face. I have to live with it for the rest of my life,” he said.

On Feb. 6, he was one of several foreign-born priests whose visa expired due because of a backlog with the United States Citizenship and Immigration Services. He was legally unable to work until March 29, when he gained permission to live and work permanently in the United States.

“I was grateful to God, to the people who assisted me, including the bishop and chancery. I really feel at home.”

Asked if he feels like he’s fulfilling God’s call for his life, he humbly answered, “I hope so.”

“I feel like I have done what I was supposed to do, but I have more to give, God willing. I don’t have control over my life, but I am willing and ready.”

In the face of suffering, choose to be joyful