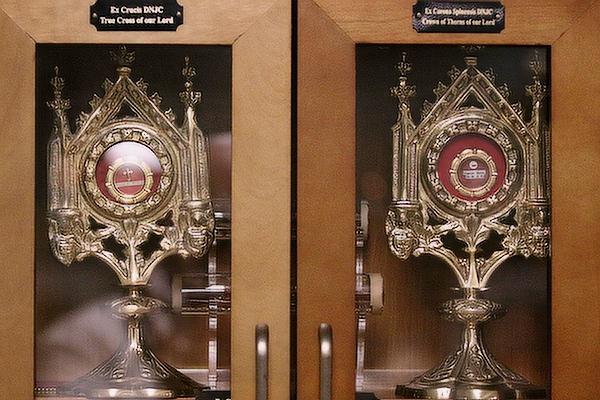 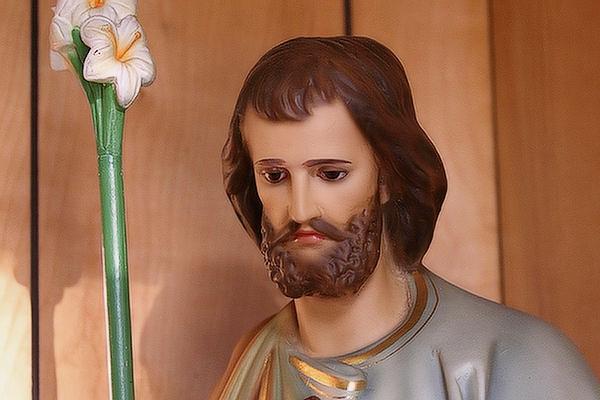 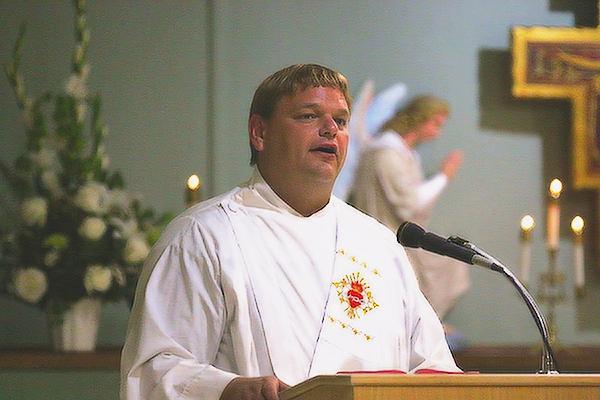 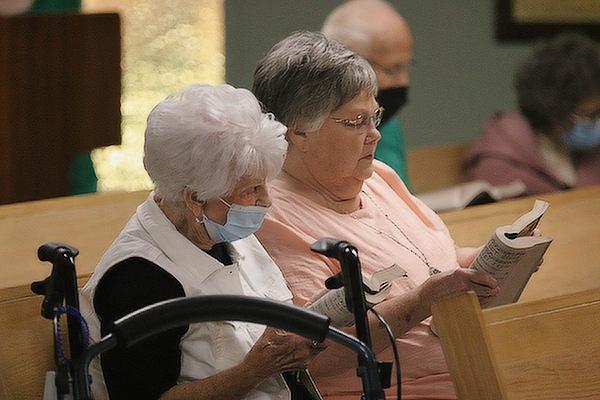 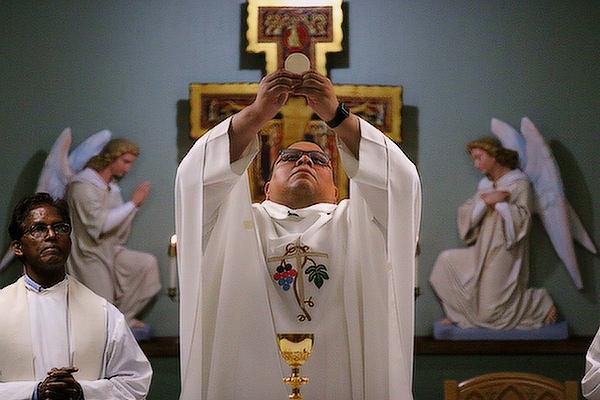 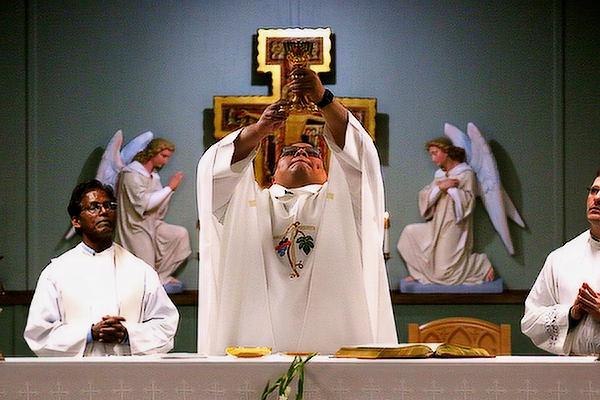 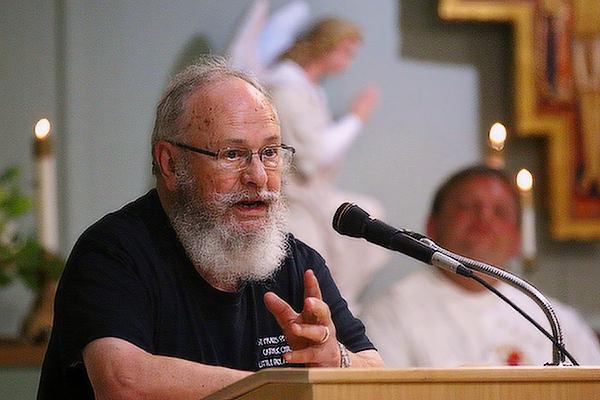 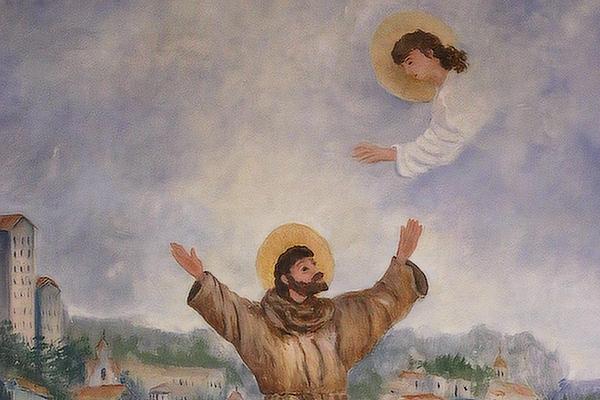 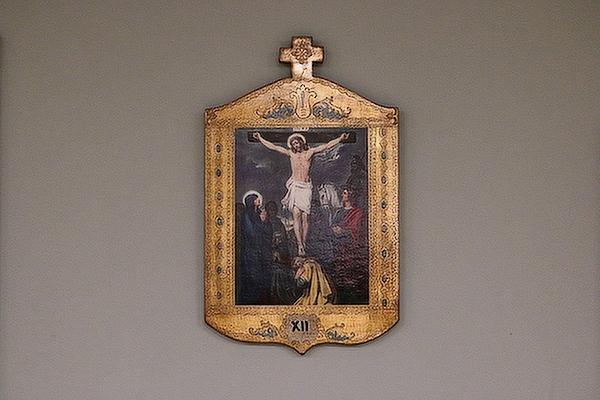 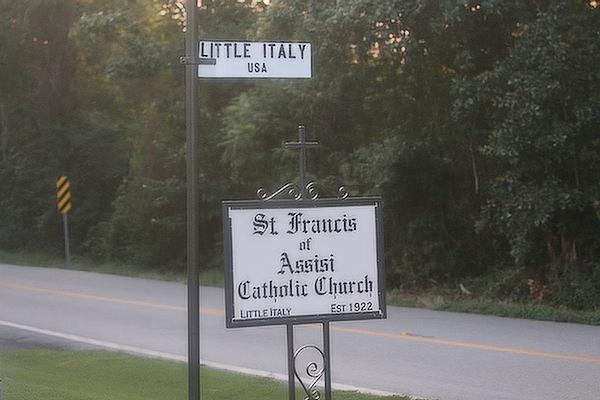 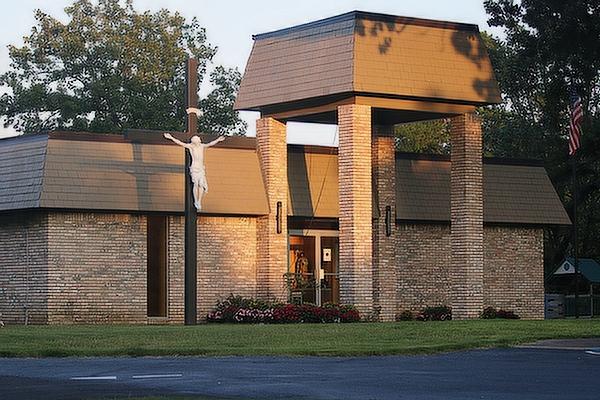 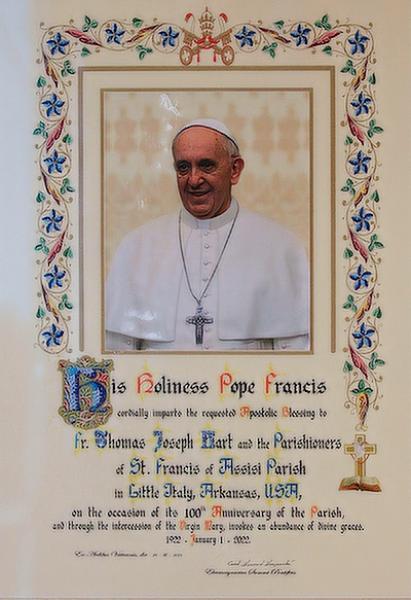 In Arkansas, it is rare to find a community built around the Church, but that is one of the things that sets Little Italy in central Arkansas uniquely apart.

On Aug. 5-7, parishioners, descendants of Little Italy’s founding families and the community celebrated the 100th anniversary of St. Francis of Assisi Church.

Festivities began with an opening Mass and social featuring traditional Italian desserts on Friday; a prayer service at and blessing of the parish cemetery, Little Italy Heritage Museum cocktail hour and catered banquet with live Italian music on Saturday and a centennial Mass with Bishop Anthony B. Taylor and spaghetti and sausage lunch on Sunday.

“It's really hard to put into words what it means to be here because it's emotional,” said Vince Chiaro, 82, a descendant of one of the earliest families to settle the area. “I'm about to cry right now. Our forefathers came over here to just absolutely nothing, a wilderness, and it's now just a growing community with a loving church. It is humbling. We just feel very fortunate.”

“It's really hard to put into words what it means to be here because it's emotional,” said Vince Chiaro, 82, a descendant of one of the earliest families to settle the area. “I'm about to cry right now. Our forefathers came over here to just absolutely nothing, a wilderness, and it's now just a growing community with a loving church. It is humbling. We just feel very fortunate.”

During his homily at the opening Mass of the weekend, Father Juan Guido, who just became pastor of the parish July 1, congratulated his parishioners on their centennial saying many parishes cease before they make it to 100 years. He reminded them that the people are the pillars of the Church.

“We should be very proud of this community,” Father Guido told Arkansas Catholic after the opening Mass. “They’re small, but for 100 years, they’ve done great things. The community here is very wonderful, very welcoming, and it has been a great transition. They opened their arms. There are a lot of people with faith here. They believe. That's great to be a part of.”

St. Francis of Assisi Church is now a mission of Christ the King in Little Rock.

“The church is the center of their life,” the pastor said. “They want to express that there's a sense of joy, and that they're very proud — not just for the 100 years — but for the family that they have here.”

Little Italy, which straddles Pulaski and Perry counties on Highway 300, near Roland, is roughly 30 miles west of Little Rock. It was founded by five Italian immigrant families — the Segallas, Belottis, Perrinis, Bustanos and Granatos — who relocated to rural Arkansas to escape gun violence in Chicago, according to Deacon Chris Dorer, St. Francis’ centennial chairman,  chief curator of the Little Italy History Museum and author of two books on the settlement. Lured by a newspaper advertisement for land at $10 an acre, the rolling hills reminded them of their northern Italian homeland. They envisioned an agrarian lifestyle centered on sustenance farming, grape growing and wine-making.

On Dec. 15, 1915, 27 Italians arrived with all their possessions in Ledwidge, the town with the closest train station, and made the three-mile trek by mule and cart or their feet to their new home, which they named “Alta Villa,” or “the high place,” according to Dorer. That winter, they built a house for all five families to live in together. The next year, houses were built for each family. They were soon joined by the Cia and Chiaro families, followed by the Dal Santos, Ghidottis, Vaccaris, Zulpos, Carraros, Crosariols and Balsams.

The families initially held Mass in the Ledwidge schoolhouse, attended by a priest from Little Rock. In 1922, they bought the deconsecrated St. John the Evangelist Catholic Church in Ola (Yell County), disassembled it, put the parts on a train, unloaded the pieces onto mule-drawn wagons that took it to Little Italy and reassembled it on land in the center of the community donated by the Perrinis. It was named for St. Francis of Assisi, patron saint of Italy.

Bishop John B. Morris formally established the parish as a mission of St. John Seminary June 15, 1922. According to Dorer, for years, priests traveled by train from Little Rock to Little Italy on Saturday afternoon, stayed with a family overnight, celebrated Mass on Sunday and returned to the capital on Sunday evening. In those days, when automobiles and paved roads were still novel, a one-way trip between Little Rock and Little Italy took four hours by car. Trips were often hampered by muddy byways or flat tires.

In 1967, then-pastor Father John Hlavacek commissioned the construction of the current church. The original wood structure was replaced in 1969 with a brick sanctuary built on land donated by the Bertolo and Balsam families. Local craftsmen Henry Wagner and his son, Joseph, handcrafted the Gothic cross and altar from oak. The church interior is decorated by six large images depicting the life of St. Francis painted by local artist Alma Gipson. The Stations of the Cross were blessed at the Vatican by St. John Paul II. The church also features two reliquaries that contain more than 20 first-class relics of Jesus and prominent saints in Church history, including the True Cross and the Crown of Thorns, given to the Church from a dissolved Carmelite Convent in Pennsylvania.

Angelina Zulpo Dunlap’s lifetime has been almost congruent with that of the parish. The 91-year-old descendent of one of the early families said she was baptized when the church was just 8 years old.

“It means a lot to me to be here,” she said with her light blue eyes shining brightly. “My father came (to the United States) from Italy when he was 7 years old. In fact, I was born in my grandparents’ house. I was raised in the original church. I have a lot of history up here in this neat little community.”

While the parish celebrated its 100th anniversary this month, it anticipates celebrating again this fall. In 1927, the church began celebrating the Grape Harvest Festival on the first Sunday of October. For many outsiders, the festival put Little Italy on the map. Known today as Little Italy’s Italian Festival, the celebration draws thousands of people who consume hundreds of pounds of spaghetti, nearly a hundred gallons of sauce and 850 pounds of Italian sausage each year. While the festival was canceled the past two years because of COVID, the parish is hoping to hold the 95th anniversary of the celebration this fall.

“We’re all getting old, and I'm hoping that our younger folks will carry on this tradition,” Chiaro said. “As long as Christ is here, I know it'll happen.”

Dorer said he is pleased to reflect on St. Francis’ history, but he believes great things are in store for the parish.

“One hundred years really means a true recognition of the sacrifices of those that came before us, the people that made our childhood what it was, who were here long before we were,” he said. “It’s really a beautiful recognition of what God has given us here. I can't give the Lord thanks enough for the blessings of this parish. It is the focal point of the community, always has been.”

Dorer says the parish will continue to be a faith-centered community where sacraments are administered and the wonderful celebrations that came along with those sacraments happen.

“I think the Holy Spirit working through the bishop aligning us with Christ the King as our mother parish really breathes new life into us as the city moves westward,” he said. “I think over the next few years we're going to see a lot of new life breathed into the parish, through the grace of God.”