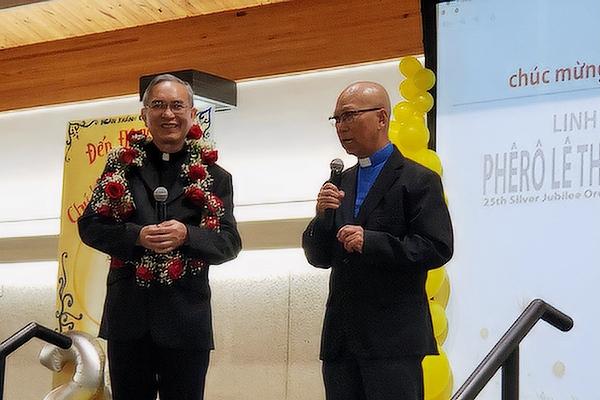 Friends, family and parishioners of Father Peter Quang Le knew the obstacles he faced on his 27-year journey to the priesthood.

They celebrated with the associate pastor at Sacred Heart of Mary Church in Barling on his 25th anniversary as a priest June 26.

“From the time I was 5, my mother took me to church every day and prayed that I would become a priest,” Father Le said.

He attended a minor seminary in the Diocese of Quy Thon from sixth to 12th grade. After the fall of Saigon in 1975, he continued studying philosophy and theology in college. When he was 23 years old, in 1982, his parents, two sisters and four brothers moved to the United States, settling in Iowa. Still, Father Le stayed, expecting to complete his seminary education in his home country.

“The Vietnamese community helps children communicate and worship with their grandparents who might not speak English,” Father Le said. “It preserves our culture and our religious traditions.”

“In August 1982, the Vietnamese government closed my seminary,” the 62-year-old said. “I went to live with my grandmother and took a job helping the bishop in the Quy Thon cathedral, hoping my seminary would reopen. By 1990, the government allowed six seminaries to open, but our seminary was still closed.”

In 1992, he moved to Iowa, but one year later, he relocated to Arkansas with a brother and sister. He met Bishop Andrew J. McDonald to see if he could complete his seminary education through the Diocese of Little Rock.

“Bishop McDonald sent me to the University of Arkansas  Little Rock for a year to learn English,” Father Le said, “and then the Quy Thon diocese gave me a scholarship to go to Rome, where I learned Italian and studied theology and canon law.”

“Blessed Cardinal Francis is now a candidate for canonization,” he said. “He had been imprisoned by the Communists from 1975-88 and went to the Holy See after he was released.”

Upon his return to Little Rock, he spent one year serving at Our Lady of Good Counsel Church until he was reassigned to Christ the King Church in Fort Smith. After 10 years, the Vietnamese ministry moved to Sacred Heart of Mary Church in Barling, which has become its permanent home.

While serving in the state since 1997, in August 2013, he was officially named a priest of the Diocese of Little Rock.

“The Vietnamese community helps children communicate and worship with their grandparents who might not speak English,” Father Le said. “It preserves our culture and our religious traditions.”

Some of those traditions include devotions to Our Lady of La Vang and the Vietnamese martyrs. Father Le and parishioners travel 150 miles to Carthage, Mo., every August, joining 50,000 other Vietnamese Catholics to celebrate Marian Days.

Several years ago, he accompanied the Eucharistic Youth group on a mission trip to the Mekong Delta in Vietnam, where they built houses, fixed a bridge and ministered to poor rural families.

“We still have new families coming from Vietnam,” Father Le said. “Usually, they are sponsored by their relatives, who help them get jobs at the chicken plant. We also provide help when we are asked.”

Technology has helped Father Le expand his ministry to Vietnamese-speaking Catholics worldwide. Through Divine Mercy Radio, Father Le helps them pray and learn together as one community, scattered after the Communist takeover.

He launched Divine Mercy Radio through his website at radioltxc.org. It can be accessed through Facebook and Twitter and has a presence on several podcast sites and YouTube. He broadcasts daily from 2-10:30 p.m., using a combination of live and recorded material, assisted by about 50 friends who provide additional content and music.

“We begin each day with the Divine Mercy Chaplet at 2 p.m.,” Father Le said, “and we also broadcast homilies, lessons on the Bible, Church history and the catechism. In the evening, we pray the rosary and the Chaplet of the Holy Spirit. We have testimonies, witness and questions and answers.”