Diocese updates its code of conduct for staff, volunteers

Changes from the Vatican, canon law and the Archdiocese of Oklahoma City prompt update 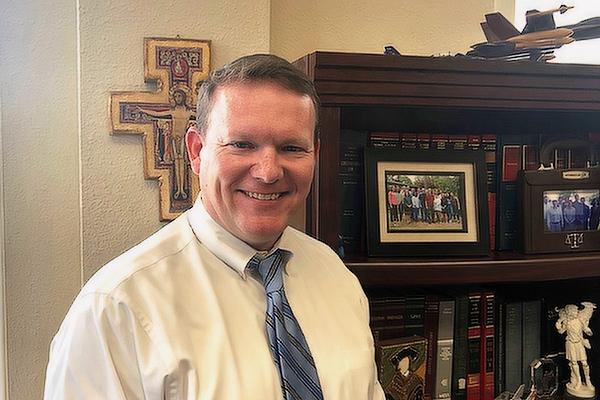 Chris Price
Deacon Matthew A. Glover, chancellor for canonical affairs in his office Aug. 4, said the Diocese of Little Rock updated its employee code of conduct for the first time since 2015 to reflect changes instituted by Pope Francis, the Vatican and the Archdiocese of Oklahoma City, head of our metropolitan province.

Chris Price
Deacon Matthew A. Glover, chancellor for canonical affairs in his office Aug. 4, said the Diocese of Little Rock updated its employee code of conduct for the first time since 2015 to reflect changes instituted by Pope Francis, the Vatican and the Archdiocese of Oklahoma City, head of our metropolitan province.

“Our new code is almost a wholesale update to the previous version,” said Deacon Matt Glover, chancellor for canonical affairs. “It has been a number of years since our code of conduct was last updated. Pope Francis and the Holy See have continued to make updates in some of these areas, and so our code and other policies needed to be updated in part due to those changes. Our new code is largely modeled after the one for the Archdiocese of Oklahoma City, as they are the head of our metropolitan province. Canon law has changed over time, as have the challenges posed by an ever-evolving ministerial landscape. It was necessary to have a code that would reflect these changes.”

The updated code of conduct calls for Catholics and non-Catholics alike, who are serving the Church in an official capacity, to comply with the provisions, which are based on Church’s understanding of the dignity of the human person and the witness we are called to give as a Church. With the new code of conduct, Bishop Anthony B. Taylor also approved an updated policy for sexual abuse of minors and policy on sexual misconduct with adults.

“Church personnel must exhibit high ethical standards and personal integrity,” it reads. “They must be aware of the responsibilities and positions of trust that accompany their work and exhibit this awareness by maintaining appropriate boundaries and exercising caution against all harm…. Healthy and safe relationships are founded upon and demonstrate our sincere love, respect and compassion for all of those we serve.”

“Our new code is almost a wholesale update to the previous version,” said Deacon Matt Glover, chancellor for canonical affairs. “It has been a number of years since our code of conduct was last updated. Pope Francis and the Holy See have continued to make updates in some of these areas, and so our code and other policies needed to be updated in part due to those changes."

Glover said the rules not only make clear proper boundaries to protect the vulnerable, but also promote proper virtues for which the Church should all be striving in its ministries.

“The most important goal of these changes is actually to protect children, youth and vulnerable persons — to create a culture of ministry in which those persons are protected,” he said. “Secondarily, these changes will hopefully help Church personnel avoid situations where there might even be the appearance of impropriety.”

The new unified code of conduct, promulgated by Bishop Taylor July 1, replaces all former codes of conduct, including the previously separate Laity Code of Conduct and Clergy Code of Conduct, which were written in 2015. All clergy, religious and employees who work with the diocese have been asked to review the new code, sign an acknowledgment form and turn it in to their supervisor for retention in their personnel file.

“We recognize, as disciples of Jesus Christ, that we must witness to Jesus both by what we say and what we do, and that our conduct always should seek to be in accord with the faith professed by the Catholic Church,” the introduction of the new code reads. “Building a culture of conversion and discipleship requires Church personnel to be in relationship with others, including minors and vulnerable persons. Since the founding of the Church, however, there have been those who have abused positions of trust to prey on minors, vulnerable persons (defined as any person in a state of infirmity; physical, mental or emotional deficiency; or deprivation of personal liberty which, in fact, even occasionally, limits their ability to defend or protect themselves, to get help when at risk of harm or to want or otherwise resist the offense) and others. Jesus anticipated such people, saying that it would be better for them to have millstones hung around their necks and to be drowned in the sea.

“This Code of Conduct for Church Personnel of the Diocese of Little Rock establishes standard policies and provides guidance for the service of Church personnel, allowing persons of good will to carry out their ministries in relationship with those they serve, including minors, while promoting healthy boundaries, avoiding appearances of impropriety and weeding out those who would abuse minors, vulnerable persons and others.”

Among the rules is a mandate for all extraordinary ministers of holy Communion for the sick and homebound to complete safe environment training and pass a background check, using a team approach and avoiding being alone when working with minors or vulnerable people and having appropriate supervision in place to promote safe environments for all.

Additionally, the code points out that pornography goes against Church teaching on sexuality and human dignity, that dating or “hookup apps” should not be used by religious or married employees as it is not in keeping with their vocation and that personnel will not illegally possess, use or distribute alcohol or other drugs. It also includes examples of non-permissible physical contact, such as tickling, massages, prolonged hugs from the front or rear and the touching of buttocks, breasts or genitals. Sharing private overnight accommodations with any unrelated minor is also forbidden.

An accused employee or volunteer is presumed innocent. All appropriate steps would be taken to protect his/her reputation, however, they may be placed on administrative leave during the course of a preliminary investigation. If an accusation is determined to be substantiated, the employee would be terminated, and a lay volunteer would be precluded indefinitely from volunteering.

When even a single act of sexual abuse by a priest or deacon is admitted or is established after an appropriate process in accord with canon law, the offending clergy would be removed permanently from ministry, not excluding dismissal from the clerical state, and he cannot be transferred for ministerial assignment to another diocese or religious province.

The bishop and the review board will review these policies at least every two years.

A Spanish translation of the new codes will be available at a later date.

Damage to altar a time for prayer, penance at Subiaco Abbey