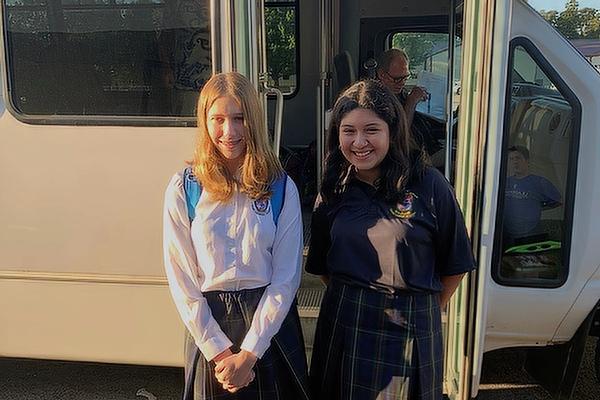 Alesia Schaefer
Elizabeth Cauthron (left), a graduate of St. Joseph School in Paris, and Genesis Rosales, a graduate of Trinity Catholic School in Fort Smith, ride the bus to Ozark Catholic Academy for the first day of school Aug. 15.

Alesia Schaefer
Elizabeth Cauthron (left), a graduate of St. Joseph School in Paris, and Genesis Rosales, a graduate of Trinity Catholic School in Fort Smith, ride the bus to Ozark Catholic Academy for the first day of school Aug. 15.

The void of a Catholic high school in the Fort Smith area is being filled this fall.

While boys in ninth to 12th grades have traveled 45 miles to Subiaco Academy for decades, girls had no option and had to choose a public or private school.

As a new school year commenced, a way was prepared for students in the River Valley to attend Ozark Catholic Academy on the campus of St. Joseph Parish in Tontitown. The independent Catholic high school, which opened in 2018, welcomed 10 female students from the Fort Smith area to its campus. The two ninth-graders and eight 10th-graders will come from as far away as Paris to attend the school.

Fort Smith has also had a desire to reestablish Catholic secondary education for some time with the closing of both the all-girls St. Scholastica Academy in 1968 and the coeducational St. Anne High School in 1973.

“There was a need,” said Father John Antony, pastor of Immaculate Conception Church in Fort Smith. “I wanted to help create the opportunity where there had been a vacuum for years. I have also always felt it was kind of sad that girls did not have a high school option. In this day and age, it’s inexcusable to not give girls the same opportunities to attend a Catholic high school.”

“There was a need,” said Father John Antony, pastor of Immaculate Conception Church in Fort Smith.  “I wanted to help create the opportunity where there had been a vacuum for years. I have also always felt it was kind of sad that girls did not have a high school option. In this day and age, it’s inexcusable to not give girls the same opportunities to attend a Catholic high school.”

For all students, the choice entails more than an hour commute to get to school and home. Driving that distance every day would be impossible for most, but Father Antony did not want transportation to be the sole reason students would say no to Catholic education.

At the beginning of 2022, Father Antony asked John Rocha, head of school at OCA, to come to Fort Smith to meet with parents. For many parents, a Catholic high school education seemed out of reach as the idea had not taken root in the River Valley area. Meetings were set up to introduce current OCA students to future families and to explore interest in the school. Within months, eight students had enrolled, with two more students signing on in August.

Another contributing factor that allowed students to make the transition more seamless was the realignment of the grades in the Fort Smith School District in 2021 to mirror the traditional ninth-12th grade high school. Prior to that, Trinity Junior High was seventh-ninth-grade and high school was 10th-12th grade. The new alignment of the grades allowed Trinity students to graduate eighth grade and feed into either public school, Subiaco, OCA or another private school.

Fortunately, this also allowed Father Antony to start problem-solving the toughest part of the equation: the transportation issue.

“Personally, I have always felt indebted to Catholic school education,” Father Antony said. “I attended St. Theresa’s Catholic School, Catholic High in Little Rock and the University of Dallas. I understand what Catholic school offers to young people in terms of faith. I feel I am repaying a debt.”

A van and two shuttle buses owned by OCA will be used for the weekday shuttle. One bus was partially paid for by Fort Smith donors.

Currently, 15 drivers have signed up to transport students each day. One of them is Father Antony, who will fill in on his day off. Eight are from Fort Smith and the six others are from Northwest Arkansas.

“I couldn’t say no to him,” said Mark Prenger, official scheduler of the drivers and longtime friend of Father Antony. “He asked me to help, and we have been involved in so many projects together through the years, such as building committees and construction projects at St. Raphael’s (in Springdale) and St. Joseph’s in Fayetteville and mission trips to Honduras.”

Prenger, a member of St. Joseph Church in Fayetteville and part-time retiree of Commerce Construction Company, said he is inspired by Father Antony’s passion for Catholic education.

“Kids need the experience and attention a Catholic education can provide, especially in our environment today. Even as a driver, I just want to help out where I can,” he said.

Another driver, Deacon Dan Hennessey, retired and moved to Tontitown in February. Not long after, he also received a call from Father Antony to drive the shuttle a couple of times a month.

“My wife and I both grew up in Catholic education, as did our boys, so Catholic it is dear to our hearts,” he said. “Providing a shuttle service to Fort Smith area students allows them to complete their high school education in Catholic schools. Girls in the area would not have a choice but to attend public schools.”

Students meet each morning at the OCA van parked at Immaculate Conception Church. The driver will either stay in Northwest Arkansas for the day or return to Fort Smith that same morning. The afternoon return shuttle departs following athletics at 4:30 p.m. with a driver from Northwest Arkansas taking an OCA van to Fort Smith and returning home. With the number of drivers, a shift will roll around only twice a month.

Mary Cauthron, mother of ninth-grader Elizabeth Cauthron and recent St. Joseph graduate in Paris, said, “We chose OCA because it is Catholic, a classical education and a smaller environment. For us, we feel OCA teaches to the whole person and not just academics.I feel like the classes are more tailored to meet her needs. As a family, we are willing to sacrifice sleep because we feel it is the best fit for her, and we feel a Catholic education is very important. This has worked out through a miracle of God that she can take the shuttle to the school.”

A similar shuttle service was set up in 2021 so students from Hot Springs could attend Mount St. Mary Academy and Catholic High School in Little Rock.

Two former female OCA graduates also came from the River Valley, one from Subiaco and another from Charleston, and they created their own carpool.

“John Rocha’s passion is unequaled,'' Father Antony said about OCA, “He will do anything to make this school a success.”

“We are thrilled this option has opened up for River Valley students,” Rocha said. “Our Catholic community in the area is growing. It is amazing that we have volunteer drivers from Fort Smith and Northwest Arkansas to drive these students 100-plus miles every day, and I am truly thankful for their contribution.”