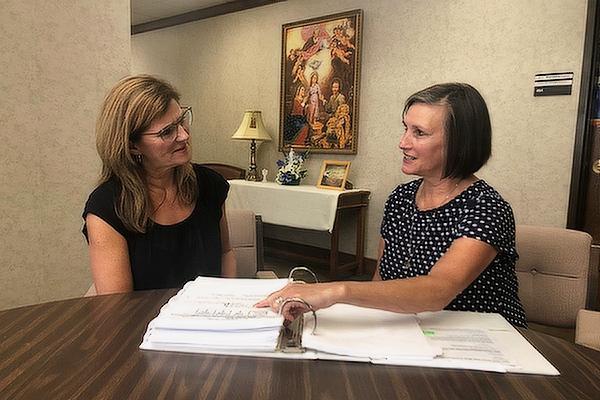 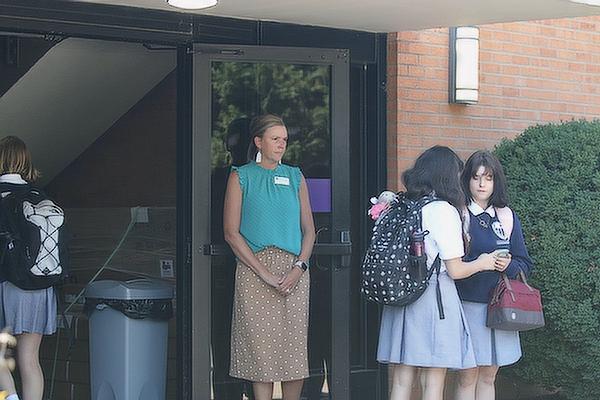 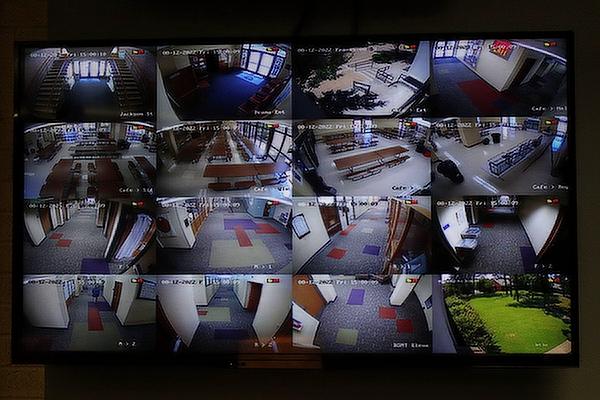 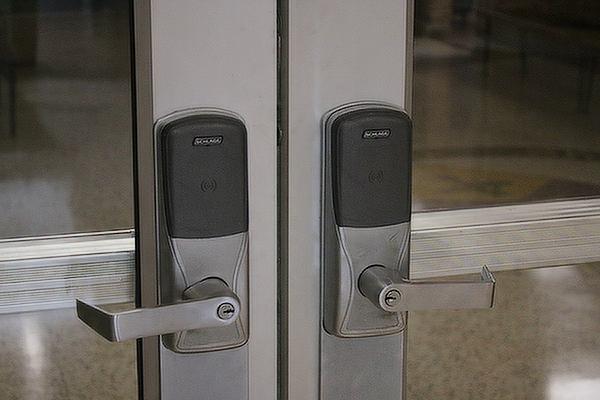 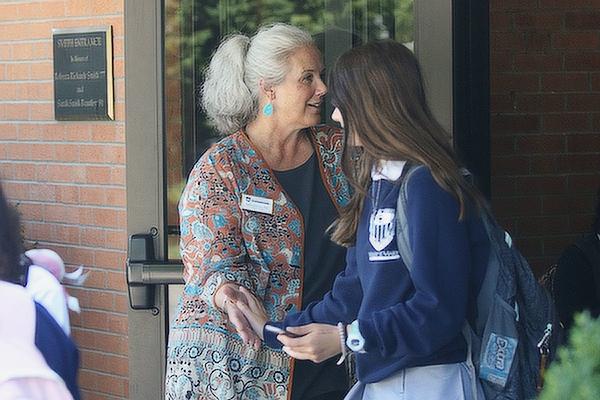 Chris Price
Robin Johnson, assistant principal at Mount St. Mary Academy in Little Rock, stands guard at a doorway at dismissal Aug. 12, the first day of school. Educators have been advised by police to limit entryways and have a staff person at each opening who only lets students into school buildings. (Chris Price photo)

Chris Price
Robin Johnson, assistant principal at Mount St. Mary Academy in Little Rock, stands guard at a doorway at dismissal Aug. 12, the first day of school. Educators have been advised by police to limit entryways and have a staff person at each opening who only lets students into school buildings. (Chris Price photo)

The mass shooting at Robb Elementary School in Uvalde, Texas, in May was another reminder to the Catholic schools superintendent that Catholic schools in Arkansas need to stay vigilant about school safety.

“We have been fortunate that we have not had any incident of a shooting in our Catholic schools in Arkansas. But gun violence has risen to the forefront, and it is a big concern for all schools, including our Catholic schools,” said Theresa Hall, superintendent for Catholic schools for the Diocese of Little Rock. “Because of the recent school shooting in Uvalde, Texas, I asked all the schools to look at their crisis plan this summer and make any adjustments. At our principals’ retreat (in late July) I reminded them to review the crisis plan with the entire faculty and staff of the school.”

“We do feel we have a greater sense of safety at a parochial school for two reasons,” said Kristy Dunn, principal of St. Theresa School in Little Rock. “First, we know every kid, every family and their life events that are happening, so we can be proactive in addressing any potential concerns. Second, everything we do is rooted in faith, which gives us a great breadth of discussion topics related to peace and non-violence.”

“Every school needs to put great thought, protocols and practice into a crisis response plan with the assistance of qualified law enforcement and other professionals that are well-versed in how to prepare and respond,” said Sharon Blentlinger, principal of Immaculate Conception School in Fort Smith.

But while a religious foundation sets parochial schools apart, Steve Straessle, principal of Catholic High School in Little Rock, said no one should think they are safe simply because they are at a Catholic school.

“Violence does not discriminate, and it would be unwise for private or parochial administrators to assume that we’re somehow immune from such threats,” Straessle said. “I believe that parochial schools may entertain a stronger sense of community than some large public schools, but, again, that does not insulate us from the potential for negative events.”

“I would like to hope that no one has a false sense of security,” said Sara Jones, head of school at Mount St. Mary Academy in Little Rock. “Unfortunately, gun violence in 2022 is … on our minds at all times. I definitely don’t feel like it can’t happen here.”

Plan for the worst

In July, the Pew Research Center released a report that found U.S. schools are tightening security procedures, but they are still unevenly adopted, according to recently released data from the National Center for Education Statistics.

“Every school needs to put great thought, protocols and practice into a crisis response plan with the assistance of qualified law enforcement and other professionals that are well-versed in how to prepare and respond,” said Sharon Blentlinger, principal of Immaculate Conception School in Fort Smith.

Across the diocese, principals say they are adopting many strategies to prevent gun violence. Safety measures include:

Many schools say they are changing drop-off and pick-up practices to keep adult monitors at the door who will let only students into the building. If a parent wants to speak with an administrator or teacher, they must make an appointment. A few schools are hiring off-duty police to be on campus during school hours.

“The concern about gun violence is very real and has caused multiple layers of security prevention and response,” Straessle said. “Our school does have a safety plan that we review every year. We do not discuss details of it publicly, however. In our last renovation, we added several security measures, such as lock-down doors, security areas and more. We continue to receive training as appropriate and — as part of before-school in-services this year  —  participated in active shooter training and Stop the Bleed training.”

Several principals said they would like to have a security officer on campus, but it isn’t economically feasible for all. For now, adding metal detectors is not being considered.

Communication breakdowns were one of the biggest concerns to come out of the Uvalde massacre, Amber Bagby, principal of Our Lady of the Holy Souls School in Little Rock, said.

“We just purchased brand new, high-quality walkie talkies that the teachers will be required to have on at all times,” Bagby said.

She said the school has looked at all security options, but some were not practical. “An off-duty officer to walk the halls, that's about $40 an hour, and the budget just doesn't sustain it.

“I told the police officer we’re partnered with to ask his officers to use our parking lot when they take their lunch break. I'll buy them lunch every day just to have the presence of a police car here as much as we can,” Bagby said.

“Every morning, my prayer is ‘Keep us safe.’”

While all schools ask parents to be a partner in the safety of children, Kathy House, principal of Christ the King School in Little Rock, believes Catholic school parents are generally keen to reach out to ask for help when a child needs it or to accept it when it is offered unsolicited.

“Our parents have always done a great job of letting us know if they hear any potential problems arising,” House said.

That helps parents and schools address issues early, before they erupt in a tragedy, she said.

“Parents are part of the process,” said Susana Anderson, principal of St. John School in Hot Springs. “They actively participate in procedures to ensure campus safety.”

Kathy Lorince, principal of Holy Rosary School in Stuttgart, and Myndi Keyton, principal of Christ the King School in Fort Smith, advise schools to be transparent with parents about the school’s safety measures.

“In the current state of our world, we all need to be aware that these types of incidents can occur,” Keyton said. “We invite parents to ask us about anything that they feel needs to be addressed.”

“We’re an all-girls school,” Jones said. “We’ve always had that element of worrying about a boyfriend coming over here or because we’re a Catholic institution with all the political stuff on Roe v. Wade, it definitely can create a target. All of these shootings have really kind of changed the way that we operate the day-to-day things.”

“Gun violence feels like it could happen at any time based on what we see in the news,” said Brenda Hiegel, principal of Immaculate Heart of Mary School in North Little Rock (Marche). “As a result, we are on high alert, and we take every precaution to reduce the likelihood of intruders.”

“I don't think there’s any way to fully ease parents’ concerns relative to the safety of their children,” Straessle said. “We reiterate that our first job is to create a safe learning environment, and we take that job very seriously.”

SEE MORE PHOTOS related to this story at Arkansas Catholic's Zenfolio page, and order prints if you like. You also can browse other photos taken by Arkansas Catholic photographers.
Click for the Catholic Schools Herald, August 2022 index