Texas native celebrates 50 years as a priest, 57 years as a monk at Subiaco Abbey 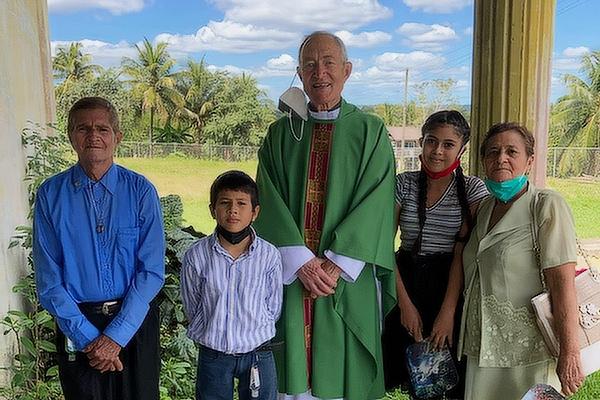 Courtesy Fr. Mark Stengel
Father Mark Stengel, OSB, pastor of St. Benedict Church in Subiaco and St. Scholastica Church in New Blaine, poses with parishioners after a Mass in Santa Familia Village in Belize, where he ministered for 8 years in the 1980s and visited in January. His Belize mission is one of his highlights as 50 years as a priest.

Courtesy Fr. Mark Stengel
Father Mark Stengel, OSB, pastor of St. Benedict Church in Subiaco and St. Scholastica Church in New Blaine, poses with parishioners after a Mass in Santa Familia Village in Belize, where he ministered for 8 years in the 1980s and visited in January. His Belize mission is one of his highlights as 50 years as a priest.

Reflecting on 50 years as a priest, Father Mark Stengel, OSB, said one of his main emotions is surprise.

“I can’t believe how fast the years have gone,” the pastor of St. Benedict Church in Subiaco and  St. Scholastica Church in New Blaine said. “But it’s been a wonderful experience.”

Father Stengel said one of the best things about being a priest is that “it allows access to people in their important moments — when they're suffering, when they're sick, perhaps dying, baptisms, marriages and so forth. It allows me to minister to people right when they really want it and need it.”

Father Stengel was born Aug. 24, 1944, the third child of Ed and Christine Stengel in Pep, Texas, west of Lubbock, but years of drought drove the family north when his father accepted a factory job in Racine, Wis. Labor unrest ended that job, and the family moved to a sharecropping farm in Illinois.

“I can’t believe how fast the years have gone. But it’s been a wonderful experience.”

In 1948, the family relocated to Arkansas, settling in Ratcliff, about 16 miles west of Subiaco, where they joined St. Anthony Church. Stengel, his four brothers and four sisters were exposed to the Benedictine teachings of monks from Subiaco Abbey, who staffed the church, and the Benedictine sisters of St. Scholastica in Fort Smith, including two aunts, who ran the parochial school.

“We were constantly exposed to Benedictine teachings,” he said. “Two of my dad’s sisters were Benedictine sisters of St. Scholastica. We had a nightly family rosary, and there was full involvement in all parish activities. We had a lot of Benedictine influence.”

Father Stengel, 77, attended Subiaco Academy with the idea of becoming a priest and graduated in the Class of 1962. Three years later he made his profession, and he was ordained a priest June 9, 1972.

Coming of age and studying to be a priest in the 1960s with the advent of Vatican II, Vietnam War and the Civil Rights Movement had an impact on his development.

“Vatican II was instituted after I entered the monastery,” he said. “When I entered all of our divine office was in Latin. Of course, I studied Latin in school, so I was fairly competent, but that was a big change. I welcomed the changes. Going to the vernacular and the changes in the documents and the teaching of Vatican II, I welcomed that with open arms. It wasn’t difficult for me to accept it at all.”

Dealing with many of the social changes of the times, especially religious leaving their vocations, proved daunting, however.

“It was a difficult time with so many changes, and so many people, monks and priests, leaving the ministry for various things,” he said. “There was a tendency at times to feel, “Am I missing out on something? Why am I staying when so many are deserting their previous vocation?’ It was a time of a lot of questioning, difficulty and losing friends and people leaving the monastery that I thought were really good, solid people. But I did receive support in that too. My mentors came to me and said how much they admired my being able to withstand that pressure to get out or do something different or seek greener pastures. But it wasn't an easy time at all.”

Father Stengel said one of the highlights of his career was the eight years he served in Belize.

“It was really a treat, and a challenge at times, to serve in a different culture with a different language, but I thoroughly enjoyed my time there,” he said.

“When I entered, we had a community of nearly 100,” he said. “I hope and pray that we will continue to receive some good quality candidates for the religious life here. We must have new members and good solid members or else we won’t survive really. We have 35 members right now. So, we're not dying, but we do need some new blood for sure.”

Today, he said his strength and stamina ebb. He doesn’t get to enjoy outdoor pursuits as much as he once did, but he is at peace.

“Instead of all this external activity, so much work, I need to grow deeper still in prayer and to serve people in that way, even though I continue as pastor for the time being,” he said. “But I want to grow deeper in prayer.”