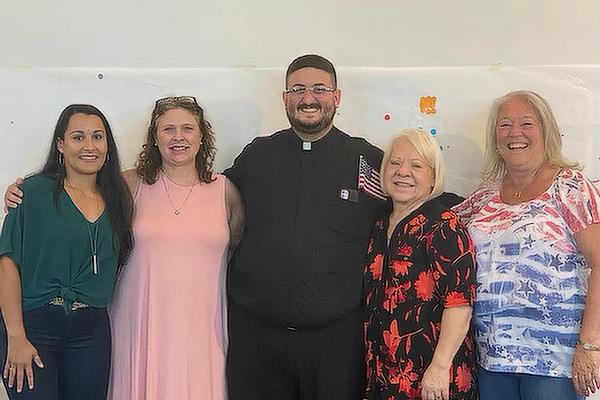 North Little Rock pastor Father Alejandro Puello made a step last month he said “has been a long time coming.”

On July 15 he raised his right hand, pledged an oath of allegiance to the United States and became an American citizen.

“It caught me off guard how emotional it was for me,” said Father Puello, pastor of St. Anne Church. “I tend to be a pretty bubbly, happy go lucky personality for the most part. I tend to be pretty passionate about things, but I'm not necessarily very emotional. But standing there, as we were doing the oath, an idea struck me which was, you don't pick where you're born but you choose where you belong. That was such a powerful realization for me there at the moment.”

Father Puello, 38, was born and raised by his mother, Yngrid Blonda, in Santo Domingo, Dominican Republic. His father, Deacon Ricardo Puello of St. Mary Church in Paragould, moved to Arkansas when Father Puello was 6.

“I'm a fairly one-track mind when it comes to the priesthood,” Father Puello said. “I put a lot of things on the backburner that don't seem as immediate or as important as serving the parish or serving the people of God. I always knew in the back of my head that I needed to apply to be a U.S. citizen.”

It wasn’t until 2004, when Father Puello was 21, that he left the Caribbean nation with a student visa to join his father, stepmom and their five children to study international business at Arkansas State University in Jonesboro. It was there he decided to become a seminarian with the Diocese of Little Rock. He studied at St. Joseph Seminary College in Saint Benedict, La., for two years, before completing his final four years of studies at St. Meinrad Seminary in Indiana.

“Once I got to transitioning to be a religious worker, I became a U.S. resident,” he said.

Father Puello was ordained as a priest on May 26, 2012, and went to work in parish ministry in Springdale, Rogers, Huntsville, Booneville and Waldron.

In 2014, he received his green card. Legal residents have to live in the United States for five years before they can apply to become citizens. But the next few years were hectic, and he preferred to put his time and effort into his congregation.

In 2019, he was appointed pastor of St. Anne Church, and then the COVID-19 pandemic stopped the world.

“I'm a fairly one-track mind when it comes to the priesthood,” Father Puello said. “I put a lot of things on the backburner that don't seem as immediate or as important as serving the parish or serving the people of God. I always knew in the back of my head that I needed to apply to be a U.S. citizen.”

His impetus to gain citizenship came not from overwhelming patriotic pride but rather to be closer to his flock. Some of his parishioners wanted him to lead a pilgrimage to the Vatican.

“The parish always comes first, so I never had any urgency to go anywhere,” he said. “For example, I haven't been back to the Dominican Republic since 2010. But when I started talking with parishioners who really wanted to go on the trip with me I realized how much easier it would be to travel if I was a citizen. I thought, ‘OK, let's do it.’”

At the naturalization ceremony in Memphis, he was joined by a parish employee, two parishioners and a sister, who made a surprise visit from Paragould, to be with him as he took the oath of citizenship.

Father Puello compared his journey to becoming an American to a convert joining the Church, an experience he had when he moved to the United States.

“The thing I've compared it to the most is becoming a Catholic,” he said. “When you are a Catholic by choice you go through the whole RCIA process, and you're prompted to be very deliberate about knowing what you're getting yourself into and understanding what that entails, what a privilege and responsibility it is. There’s more than a little bit of parallel with how we bring people into the Church.”

Now settled at St. Anne, Father Puello is looking forward to traveling. His journey to Rome is set for the fall and a trip to the Dominican Republic to visit his grandmother is on his mind. Arkansas, however, is his home.

“The Lord called me here, of all places that he could have put me in the world,” he said. “I have to not just serve here; I belong here.”