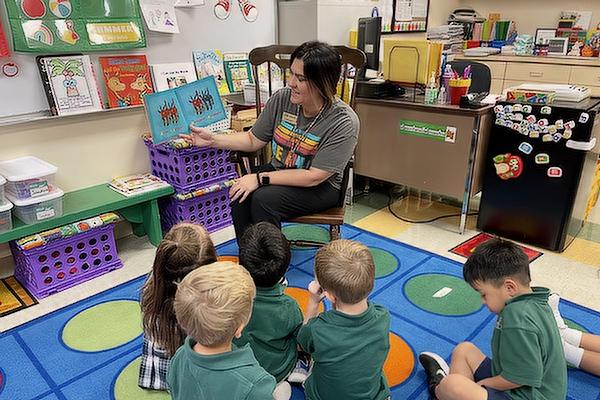 This fall Christ the King School’s preschool became the only preschool program in Arkansas listed on the national dual language registry.

The language immersion program is open to children 18 months to 4 years old.

Principal Myndi Keyton and assistant principal Katie Kratzberg have been attending the Latino Enrollment Institute at the University of Notre Dame for three years, exploring ways to assimilate students from distinct cultures and help all students experience the richness of multiculturalism.

The school’s entrance bears a sign saying “Welcome” in Persian, Lebanese, Greek, Spanish, Chinese, Tagalog, Vietnamese and English, representing all the languages spoken in students’ homes. Each year it holds a culture day, inviting students to wear clothes and share items from their ancestral country. Last year Vietnamese students, taught by their parents, performed a dragon dance at a special multicultural assembly.

“We learned at Notre Dame that it’s important for teachers to know their Spanish-speaking student’s background might be Mexican, Central or South American, and we have been learning so many beautiful things about different cultures,” Kratzberg said. “The more students learn about their friends’ cultures the more sensitivity we have in the school building, and it continues to grow.”

When Kratzberg heard about bilingual preschools at one of the Notre Dame workshops, she and Keyton explored the idea and agreed it could be done. They were able to adapt their program with their eight existing staff members — five teachers and three aides — several who are bilingual. They spent the summer researching materials and devising a curriculum with teachers.

The preschool currently has 70 students divided into six classes.

“Half of each instructional day is done in English and half in Spanish,” Keyton said. “Some preschoolers are primarily Spanish-speaking, and some primarily English-speaking. We use modeling, sometimes making a statement in both languages. We use lots of pictures, label everything in the classroom in Spanish and have Spanish and English calendars, words for colors and numbers.”

Special subjects such as library, art, music and PE are taught in English.

As soon as the program was announced on social media, the school began getting calls, and some classes have waiting lists.

Teachers said they notice children speaking both languages, and parents post videos on social media of their children naming the colors in Spanish.

“I’m beyond thrilled that our daughters will get to absorb another language while they are at the perfect age for language development,” preschool parent Allison Cross said, “and we also love that they will have a connection to another community and a larger part of the world.”

Christ the King has always had a large Vietnamese student body, so some preschoolers also may be exposed to the Vietnamese language at home.

“Most of our Vietnamese parents now are second generation,” Keyton said, “but their grandparents may speak primarily Vietnamese. We have three Vietnamese people on staff to help bridge that.”

Anahi Aleman, lead teacher of the 18-month-old class, said, “It is so wonderful that we are able to provide dual language immersion to our students. We have always prided ourselves on our amazing preschool program, and this makes it better. I am proud to be able to teach bilingually to our students and help them develop language skills in both English and Spanish.”

While their educational mission is to promote bilingualism, bi-literacy, cross-cultural awareness and high academic achievement, the preschool’s tagline speaks to its heart: “We are family. Somos familia.”