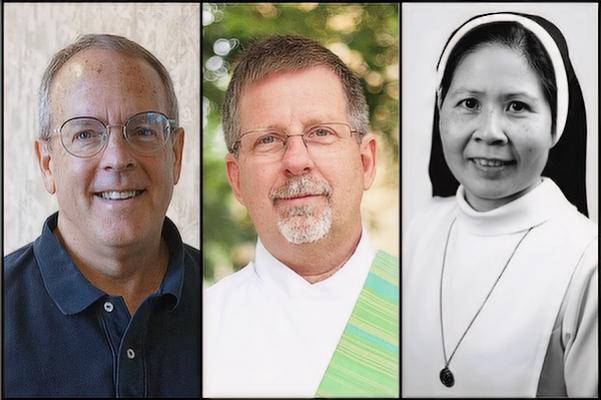 New diocesan leaders were hired for the offices of faith and diaconate formation as well as minister to religious.

The positions opened when Father Erik Pohlmeier, who previously served as pastor of Christ the King Church in Little Rock, gave up his roles as diocesan director of faith formation and deacon formation. Shortly after the job changes were announced in April, he was appointed by Pope Francis as bishop of the Diocese of St. Augustine. Sister Cecilia replaced Sister Mary Clare Bezner, who was elected prioress of Holy Angels Convent in January.

“One thing I think is important for the diocese is a clear vision,” Hines said. “We want people to encounter Christ, be disciples and make disciples. We need to do all three of those every day. That describes our vision.”

Hines said the Faith Formation Office is being deliberate in setting goals for the coming year and planning special formation days, approved by Bishop Taylor and the Presbyteral Council, to guide parish leaders on the best way to evangelize, bring new members into the Church and fortify the faith of the state’s roughly 150,000 Catholics.

He has set four goals for the office:

“One thing I think is important for the diocese is a clear vision,” Hines said. “We want people to encounter Christ, be disciples and make disciples. We need to do all three of those every day. That describes our vision.”

The faith formation team is focused on helping parish leaders and catechists better understand the faith so that they can properly teach it. The office has established an eight-week educational program to prepare parish leaders for success. It has also organized three formation days for parish leaders to be taught by priests, deacons and qualified catechists at parishes throughout the state, an online learning portal and separate diocese-issued certifications for catechists and parish leaders who complete the training.

“We're not going directly to the people in the pews from the Faith Formation Office, he said. “We work through the parish leaders. The parish is the fundamental organizational unit. That's where people encounter Christ through the sacraments. We do not want to have separate, parallel programs at the diocesan level and the parish level.

“The main point is to make sure that we are proclaiming the Gospel in our teaching and training our parish leaders to accompany a person along the pathway,” he said. “It's our responsibility to make sure the people that we have in serving the leadership positions have a foundational relationship with Christ and a life of discipleship.”

Bishop Taylor ordained 46 men to the permanent diaconate in 2022, and the faithful across Arkansas are hoping for similar results with the new diaconate formation class that is being formed now.

“We'll have a very, very large class,” Verkamp said. “It may not end up being as large as this year’s class, but it will be our third large class in a row.”

“In the last class, we had a lot of candidates from northwest and western Arkansas. This time, the majority are in central Arkansas,” he said. “We will be having English and Spanish-based classes at the same time in separate rooms. This change will give us an opportunity for the men to interact more at Mass, meals and breaktimes, so they’ll get to know each other better as they go through formation.”

While 90 potential new deacons is eye-popping, Verkamp said the class could have been even bigger.

“We had about 30 men who tried to get into the class after the deadline,” he said. “We extended it several times but had to get discernment underway. Hopefully they will join the next class in six years.”

Sister Cecilia said she was happily teaching at St. Michael School in West Memphis when Sister Mary Clare called her into her office to let her know the bishop requested her to serve as minister to religious, a liaison between the religious women and men in the diocese and the bishop and sponsor the women's discernment retreat, the jubilarian Mass and workshops for religious.

“I was shocked, really shocked. I thought I can’t do this; the bishop asked the wrong person,” Sister Cecilia said.

While she was initially overwhelmed, she said a conversation about the role with Bishop Taylor assuaged her fears. He explained the role saying she would help any religious with solving problems they have.

“I thought, ‘Oh my goodness, I can’t solve all of my problems,’” she said. “How can I help all of our priests, sisters and brothers with their problems?’ But the bishop and the staff at the diocese has been wonderful. He said he would help, and the people I’ve met in Little Rock have been so helpful. I have a lot of support. I am capable of doing it and still nervous, but our bishop is good, and I have the support I need.”