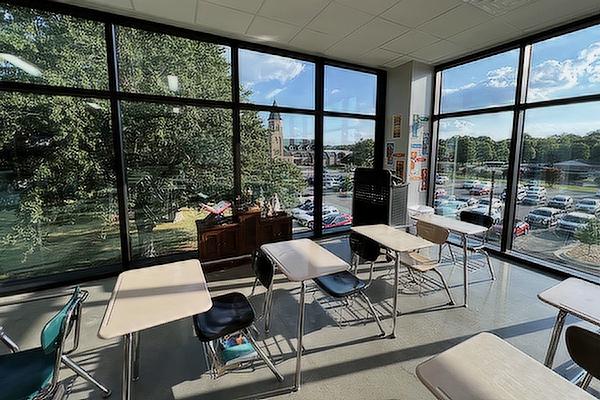 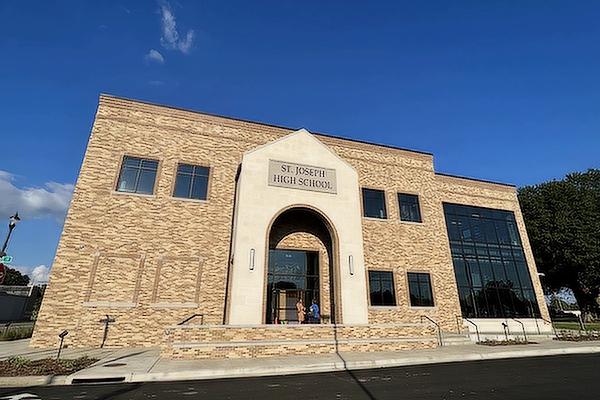 St. Joseph parishioners and former students streamed into the new St. Joseph High School in Conway during the two-night open house Sept. 7-8, as teachers and staff smiled, ready to show off their new space.

“Did you have anything to do with this?” Ballard asked.

“The main hope that we have is to provide a place where we can help the parents of our students to grow in holiness and to discover how God is calling them in life and to assist them in their role in handing on the faith along with providing an education for the service of the world,” Father Robbins said.

This moment was a long time coming. Held up for a year because of the COVID-19 pandemic, the school launched the public phase of its $10.9 million capital campaign in the spring of 2021 to replace the 70-year-old building. Bishop Anthony B. Taylor celebrated the groundbreaking June 30, 2021, and staff began moving in July 11 this year.

It cost $9.5 million for the building and site, with about $1.2 million left to raise, high school principal Matt Tucker said.

“It's amazing. The previous high school served a purpose very, very well. … In the old high school, everything had to be retrofitted, technology-wise,” Tucker said, adding the new building is modern. “When I say everything is cleaner, it looks like a building that’s done the right way. It's just amazing. And so, the students, I think they're still trying to figure out how to use it.”

The new 39,000-square-foot building is positioned to the left of the former 21,000-square-foot high school, built in 1951. Campaign funds were used for asbestos abatement and to tear down the old building in June. In the future, a new kindergarten-sixth grade school will be built, part of a master plan to move elementary students from across the street onto church grounds.

Bishop Taylor celebrated a school Mass and blessed the building Aug. 31. Father Tony Robbins, who has been pastor of St. Joseph for six years, said investing in the school is an “expression of faith.”

“The main hope that we have is to provide a place where we can help the parents of our students to grow in holiness and to discover how God is calling them in life and to assist them in their role in handing on the faith along with providing an education for the service of the world,” Father Robbins said. “So spiritually, we’re hoping to help the students to discover themselves as how God intended them, with their God-given purpose in life and to have a good facility which makes it conducive for our present students, but also students well into the future.”

The two-story high school is filled with large windows, making the parish completely visible from the entrance and in many of the 11 classrooms. The school has a student union with a digital learning space called the Cyber Cafe and eight large classrooms for music, industrial tech, computer and science labs, with easy-to-move furniture. The black-box theater  —  a square room with black walls  —  will be versatile for school and community events, seating 75 people for a production and up to 200 with seating only. A store will soon be open year-round to sell school merchandise. All classes, except for first-period study hall, are in the school and no longer overflow into the parish’s Spiritan Center.

Architect Nabholz, a parishioner, and Jake Nabholz of Nabholz Construction led the project.

“It’s been a great, smooth process,” Joanna Nabholz said. “It was good working with all the teachers that actually taught me in high school. It was a good collaboration, I think, between all of us  —  the school community, parish members that helped with the design and construction of the building.”

Art teacher Penny Bassham, who has taught for 30 years at St. Joseph, said she loves the storage spaces in her room, and large industrial sinks cut clean-up time in half.

“I actually have some empty spaces that are not filled,” Bassham said, alluding to her formerly cramped space. But the best blessing is having her former student, Joanna, design it, calling her one of her “best students.”

Though modern, the design features gave homage to the legacy of education at St. Joseph, which started in 1879.

“We really got to do some neat things in the student union. We did wood paneling with the alma mater inscribed, the logo inscribed,” Nabholz said.

Repurposed wood from the school’s 1959 gym, later used as a parish hall, was used for a bench in the student union. A tree from at least the 1980s on campus grounds is now part of the millwork in the Cyber Cafe.

“Everything,” Nabholz said about what it meant to design the school. “I don’t know how to put that into words, it’s been a very great process to be a part of it.”

Home to 194 seventh to 12th grade students this year, Tucker said he plans to collect data on how much the new building has and will impact future enrollment.

“I'm going to be tracking enrollment over this period of time between now and when we begin to launch the next phase of the K-6 building,” likely still several years down the road, Tucker said. “We’ve got to get this building paid off.”

Information about the school’s capital campaign can be made by contacting school business manager Cathy White at (501) 327-5528 or .