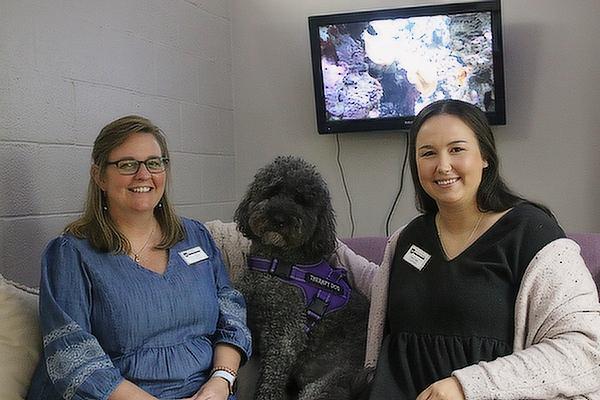 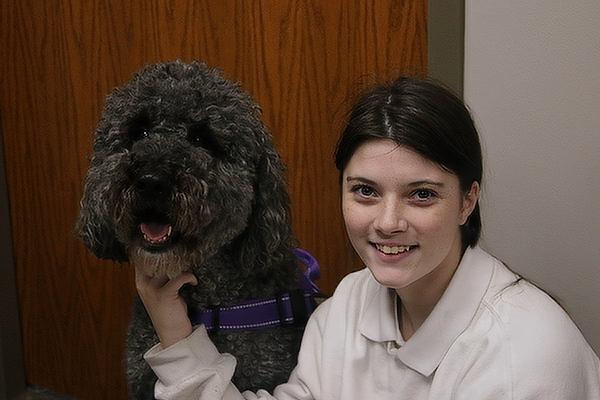 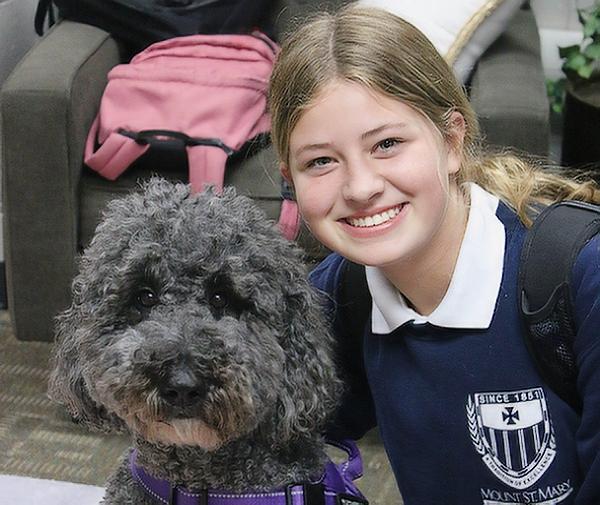 Chris Price
Freshman Annie Burkhead stops in at the counselors’ office during her lunch break to visit Oliver, the therapy dog, at Mount St. Mary Academy in Little Rock, Aug. 31.

Chris Price
Freshman Annie Burkhead stops in at the counselors’ office during her lunch break to visit Oliver, the therapy dog, at Mount St. Mary Academy in Little Rock, Aug. 31.

In 10 years at Mount St. Mary Academy in Little Rock, Amy Owens, the school’s director of counseling, said she has witnessed a change in culture.

In that time, she said the all-girls school has developed its counseling department to not only help its roughly 475 students realize academic success but to learn the mental health skills they need to thrive as teens and, later, as adults.

“We’ve branched out in so many different ways,” said Owens, who was recognized this summer as the Arkansas School Counselor Association’s Central Region High School Counselor of the Year. “We provide services to students who have learning differences, so we have a coordinator who does that now. We also now have a college counselor and a freshman and transition counselor.

“We're here to listen, to help,” she said. “How can our students be successful if they’re having an issue that is keeping them from focusing on their tasks at hand?”

“I worked in a public school for a long time before I came here. When I got here, I realized this was a special place,” Owens said. “Everyone in this building cares about these kids, and they feel safe to be here because of the love and respect they get. All of that feeds into the girls knowing we care about them, which is the foundation of everything.”

Mount St. Mary was founded by the Sisters of Mercy, and Owens credits the order’s values as a central tenant for the school’s approach.

“I worked in a public school for a long time before I came here. When I got here, I realized this was a special place,” she said. “Everyone in this building cares about these kids, and they feel safe to be here because of the love and respect they get. All of that feeds into the girls knowing we care about them, which is the foundation of everything.”

Over the past few years, Mount has made its counseling program a priority by adding professional positions, curricula and several features, including a designated wellness room, to focus on their students’ mental health.

Eden Coker, freshman counselor and transition coordinator, said Arkansas schools average 450 students to one counselor, and the recommended counselor-to-student ratio is 250 to one. Mount’s ratio is about 158 to one.

“That low ratio is a huge advantage,” Coker said, “and it really makes a difference.”

Last school year, Mount opened a designated wellness room in the counselors’ office suite. With a cool color palette, soft, low lights and an aquarium, the space provides students a soothing place where they can temporarily escape to center themselves.

“That initially started because of our connection with other Mercy schools and how they are facing challenges,” Owens said. “It's a quiet space to de-escalate and use coping techniques for something that hasn't reached a level that requires one-on-one counseling. The good thing about our particular space is we can see inside from our desks so if they've escalated to a level that needs our attention we can intervene right then.”

Mount St. Mary places a lot of energy into helping its freshmen adjust to high school and the counseling program has also become a major feature of the school’s recruitment efforts.

“On every tour, Annie Cross, our director of enrollment management, focuses on the counselors, the wellness center and how important the girls’ mental health is to us,” Owens said. “She says people leave here with a great feeling, and they do. That's her goal in admissions, and that's our goal while they're here as students.”

“We are something they want all the families to know about,” Coker said. “I think that helps us do what we do because students come here and they know our offices and they know how to reach us because they involve us in the admissions process and in orientation, and that's a huge help.”

When freshmen arrived on campus they were paired with upperclassmen mentors who assist all year in making their transition easier.

“I have girls looking out for them,” Coker said. “Our freshmen might be more open to talking to the 11th and 12th graders because they are peers. Some of their questions are easy, but if the mentors notice something a bit heavier, they can say, ‘Hey, this girl is struggling.’ Then I can pull her in for a one-on-one meeting.”

As part of their spring semester theology classes, each freshman participates in Prepare U, a nationwide curriculum that covers mental and physical growth, personality development, behavior, family systems, grief, mental health, social media and technology, relationships and dealing with anxiety and stress.

“In the lessons they are given a scenario and then in a class discussion they break down ways they could have dealt with it,” Coker said. “They're getting to talk about the same things that they experience, but they’re looking at it as someone else's problems. They’ll often come up with the right advice in class, which helps them when they’re confronted with that issue. There’s a lot of self-reflection and affirmations to be their best.”

“It’s working,” Owens said. “The students do pre- and post-curriculum surveys and the data that we're getting back is reporting that it's very beneficial.”

While he’s not officially on staff, Oliver Owens keeps office hours in the counseling department three days a week. Oliver is Owen’s therapy goldendoodle. Between classes or on their lunch break, girls will stop into the office to give him a quick pet, but his presence serves a purpose.

According to a 2014 study by University of Pennsylvania psychologists Melissa Hunt and Rachel Chizkov, therapy dogs “can lower acute distress without compromising emotional processing or therapeutic mechanisms, and may actually improve long-term outcome for some individuals.”

After the first day of school, Coker surveyed the freshman to ask how their day was. One young lady said she was really nervous, but “Oliver approached me in the hallway, leaned against me and told me everything was going to be OK.”

Sometimes his work is more detailed. Owens said a student was struggling to open up about issues she was experiencing, so she brought Oliver in to help encourage dialogue.

“She never really opened up before, but she got on the floor to pet Oliver,” she said. “He's so sweet and helped her relax. Thirty minutes later she had completely opened up. He does help the girls talk, and that helps us help them.”

Kelly Lasseigne, a member of Christ the King Church in Little Rock, has two daughters at Mount, freshman Lauren and senior Peyton, who is on the autism spectrum. While her mother said Peyton is high-functioning and has always been a straight-A student, she does have occasional difficulty with sensory issues as well as social communication and interactions. She said Mount’s counselors — and Oliver — have made all the difference in her daughter’s ability to succeed.

“Peyton has just soared,” Lasseigne said. “The counseling program is worth the price of tuition alone.”

For much of her daughter’s childhood, when Peyton would get overwhelmed, she did not have the appropriate coping mechanisms and would go into “a complete meltdown,” Lasseigne said. “Now, when she begins to feel too much too fast, she can go to the counselors’ office, pull herself out of the situation and within five minutes she’s calm. She could never have done that before.

“As a parent, not having that worry and stress is unbelievable. I can't even put it into words. I don't even know how to tell them. I want to cry because I’m so appreciative. They have a fantastic curriculum, but as far as life, this is so important. It’s such a blessing.”

Senior Olivia Bush said she had a rough end of her junior year, and Owens was able to help her navigate her difficulties.

“Miss Owens was just like my person,” Bush said. “I could come to her with absolutely anything and had the comfort of feeling that she's not going to tell anyone.”

Now, Bush checks in with the counseling suite every day whether she has an issue at hand or not.

“Miss Owens and Miss Coker are really uplifting and always positive, and you can go to either of them anytime,” she said. “They're always welcoming and open, and Oliver is also amazing. He can turn your day around anytime. He'll just cuddle with you and comfort you.