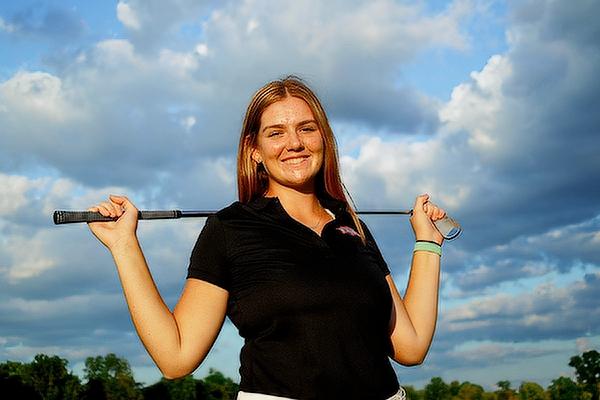 At age 6, when most little kids would rather be cooling off in a swimming pool or playing a video game, Reagan Zibilski wanted only one thing  —  to hang with her father Brad as he played a round at the local country club. And while the 18-year-old University of Arkansas freshman wouldn’t get serious about the sport until middle school, her early fascination with the game hinted at something special.

“I think it was the difficulty of golf that came as a fascination,” she said. “It’s probably the most difficult and frustrating sport you can play. But when you pull something off on the golf course, like a shot that might be really tough, it’s just so rewarding. I think that was the part that really stuck out to me.”

Zibilski’s decision to focus solely on golf in junior high was the preamble to a remarkable career. Her middle school didn’t have a golf team, so she competed in junior golf instead, playing in USGA and American Junior Golf Associated events at the state and regional levels. Qualifying for the 2019 U.S. Women’s Open at 15 announced her as someone to be taken seriously, and she made the cut at the U.S. Women’s Amateur the following year.

While attending Springfield (Mo.) Catholic High School, she was part of three Missouri Class 2 state championships, scoring individual state titles as a junior and senior. She chose Arkansas as a high school sophomore over a bevy of other offers, out of a desire to play in the SEC.

"“I play for God every time I go out there. No matter if I play bad or if I play well, I do it for him. You’re not going to let him down, ever, as long as you try your best."

“I went through the recruiting process during COVID, and obviously, that hindered a lot of play,” she said. “The SEC was the only conference that kept on playing the season after and that was really impressive to me, to see how they handled that.

“The second I stepped out here (at Arkansas), I just automatically knew that this is where I wanted to spend my next four years. The coaches are just as good as it gets; they help all of the girls in every way that you could possibly be helped, tutors and athletic centers, there’s nothing like it. That was a big thing, to have a good support system, as well.”

Zibilski is one of only two freshman golfers for the Hogs and is already making her mark. In the squad’s opening weekend tournament Sept. 2-4, she shot the second-lowest score for Arkansas, finishing 20th. Her length and accuracy off the tee — she routinely finds 14 or 15 greens in regulation per round — make her formidable on any course as it takes some pressure off her short game. Putting is a work in progress, she admits, while game management is a secret weapon she’s grown into.

“A couple of years ago, I would probably say that I was very aggressive when it came to course decisions,” she said. “But as I’ve grown and matured a little bit, I think that I’ve been able to plot myself around the golf course a lot better, maybe make a few different decisions.

“Like, OK, par five, I’m 230 yards out, which means I can get there, but there’s bunkers on the left and water long. Are we really going to do that, or are we going to hit it to a certain wedge number where you know you can get it inside 10 feet the majority of the time? Stuff like that I’ve been able to have better course management with, and all in all, it’s helped me out with my scores.”

Another longtime advantage has been her faith. Though not Catholic herself, her time at a Catholic high school helped reinforce the spiritual foundation upon which she relies heavily.

“In any sport, you can get really caught up in how you play, your wins,” she said. “I play for God every time I go out there. No matter if I play bad or if I play well, I do it for him. You’re not going to let him down, ever, as long as you try your best. I think that’s a huge thing, and if it wasn’t for my spiritual side, I wouldn’t be where I am.”