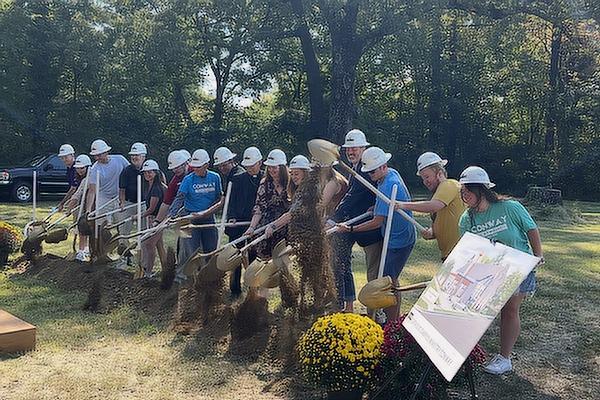 On a vacant lot across from the University of Central Arkansas campus, Deacon Richard Papini, founding director of Catholic Campus Ministry in Conway, thanked many people for contributions to the new ministry building during its official groundbreaking ceremony Sept. 24.

Papini has been the ministry’s spiritual compass for the past 23 years and with an enthusiasm big enough to match the soon-to-be larger-sized facility, he exclaimed to a cheering crowd, “All of this taken together has gotten us to where we are today — breaking ground for a new, spacious and beautiful Catholic campus ministry center for Conway, Ark. Praise the Lord.”

Amid a crowd of students, donors, college faculty and political leaders, Bishop Anthony B. Taylor blessed the grounds. Construction was set to begin Sept. 26. The bishop pointed to Psalm 127:1, stating, “If the Lord does not build a house, in vain do his builder's labor.”

“Whenever we look to the interests of our neighbor and our community, in this case our college students that serve them, we become God's co-workers. And that's exactly the case with all of your work,” Bishop Taylor said.

“I'm so excited to have space where people feel comfortable to just come hang out and talk about our faith, but also do fun stuff and just get to meet new people,” Sarah Duvall said.

In 2019 UCA needed land for an integrated health science center and bought the small white house and land at 2204 Bruce Street where the campus ministry met for 20 years. CCM moved to a rental house provided by UCA with a “huge deal” on rent, campus minister Kasey Miller said.

The university then sold them the land where their new home will be on South Boulevard and Baridon Street. Construction of the 7,425-square-foot facility was delayed a year because of rising construction costs.

The $3 million capital campaign “Sacred Space, Sacred Time” brought in $3.7 million since its silent-phase launch in October 2020 and its official public-phase kickoff in September 2021.

“We thought we had fundraised everything, but prices went up again,” Miller said.

The funds raised will cover the building costs, contingency funds and furnishings inside the building. Beyond individual donations, a $100,000 grant from Our Sunday Visitor and a $75,000 Catholic Extention grant helped their efforts. Miller said the goal is to open by welcome week in fall 2023.

The endowment campaign “Securing the Future, Ensuring the Mission” needs $500,000 for the ministry to maintain the building and not have to “dip into funds” used for students, Miller said.

UCA President Houston Davis, college staff and students came to the groundbreaking, along with local politicians, including Catholics U.S. Sen. French Hill and Arkansas Rep. Steve Magie, who both spoke.

John Nabholz, chairman of the 10-member campaign committee, emceed, and a cookout was held after the presentation.

“We still are in a fundraising mode, and we would love to have your help,” Nabholz told the crowd. One opportunity is to purchase a brick with the donor’s name or in honor of someone for $150 that will be placed in the building’s entryway.

Liz Tingquist, diocesan director of campus ministry who served as one of five advisors to the campaign committee, has seen several campus ministry building projects come to fruition over the past 10 years.

“First of all, it creates an atmosphere that’s much more relative to what we’re doing,” she said. “... I also think the new facilities create a welcoming atmosphere for students and a facility they want to come into. I know with UCA, we have a dedicated space for reconciliation. It’s so much more Catholic in its look.”

During the campaign launch two years ago, the ministry shared that during its then 21-year presence at UCA, 30 students had joined the Catholic Church. Father William Burmester of Texarkana, who was ordained in 2018, has credited the ministry as formative in his vocation.

Drawing in students to the former ministry building was no small feat, as Protestant ministries on campus have larger facilities and staff to appeal to students. A big hit to the ministry came in 2020 when COVID-19 canceled activities. The house was still open for students, but Masses were moved to St. Joseph Church in Conway.

They have 100 students registered, about double from last year, with 80 consistently attending the college Sunday Mass at St. Joseph.

“So one of the things we've really been working on is building relationships and empowering the students not tied to a building, which is ironic because we’re building a building,” Miller said. “Going where people are and living life with people. It’s more attractive in this season of people yearning for that authentic connection we missed during quarantine.”

That can mean going out to play laser tag, just walking around meeting people, or small group leaders inviting people to get some ice cream and study.

Having that connection with their faith and fellow Catholics throughout the week can help draw them to Mass on weekends, Miller said.

“I'm so excited to have space where people feel comfortable to just come hang out and talk about our faith, but also do fun stuff and just get to meet new people,” Duvall said. “Right now the building is just pretty small and so sometimes it can be difficult like if somebody's trying to study in the building, you feel bad about doing anything else. And so finally having the space to kind of branch out and have multiple things happening at once.”

The new facility will be built by Nabholz Construction and has been designed by Joanna Nabholz, with H+N Architects. It will include a 160-seat chapel, confessional and sacristy. Students will have a large meeting room, 100-seat dining room and commercial kitchen and outdoor gathering space.

Luke Hoelzeman, 29, was hired in July as the assistant campus minister.

“I was very passionate when I was involved with CCM in college and just to be here at the ground level and just see all of these dreams that myself, people I went to school with, people before us, just to see the dreams that we’ve all come up with start building on Monday; I mean that’s just phenomenal,” Hoelzeman said.