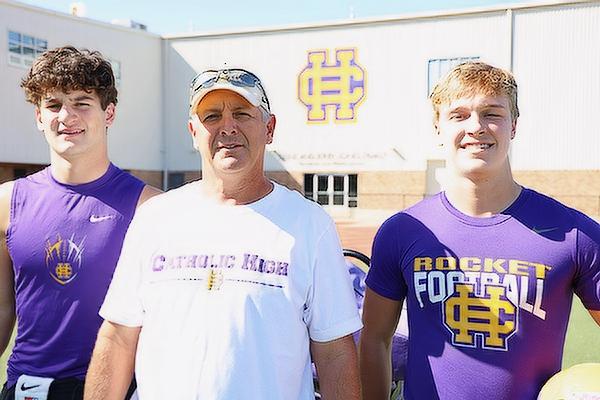 Catholic High is undefeated in football and no one seems less impressed by that than the team itself. After all, the 7-0 Rockets — from the coaching staff down to the bench warmers — have much bigger things in mind this season.

“It’s amazing, but I don’t really want to look at (our record) right now,” said Cole Pace, senior safety and a team captain. “I want to push through. I want to be undefeated the whole season so that’s what I’m looking forward to.”

Pace’s tone mirrors that of his head coach, John Fogelman, now in his ninth year leading the program.

“You can’t predict 7-0 even if you are a dominant team,” Coach Fogelman said. “We knew we would be better this season. We had some experience coming back, some good players coming on. They had a very good work ethic during the summer. That’s always a promising sign, but there’s a lot of things that’s gotta go right.”

The team may be aw-shucking their way through this remarkable run, but Rocket Nation is seeing something that hasn’t come out of the purple and gold since many current players’ fathers were roaming the CHS halls.

In its first year competing in the 6A division, Catholic has been a juggernaut, outgaining their opponents in total by almost 500 yards. The offense, led by senior signal caller Sam Sanders, brings a balanced attack opponents have had no answer for thus far, averaging 176 yards passing and 155 yards rushing per game.

“We didn’t really want to go through what we went through last year, so us seniors put our heads together and said we’re really gonna work hard,” Sanders said. “For me, it started with the first game of the year, the North Little Rock game. After we beat them, I knew we could really beat anyone.”

Sanders, who’s completing passes at a 64 percent clip, has already amassed 1,212 passing yards and 12 touchdowns versus just four interceptions. He said the firepower shown by this year’s squad is rooted in experience.

“Offensive line experience, receiver experience, just experience in general,” he said. “We’ve had a lot of people come back from last year who are on our starting offense.”

Pace also said the tenor of the team is different than in past years, with an all-for-one attitude that’s been paying off big. The defense has forced 10 turnovers and eight sacks in seven games.

“Last year, it kind of felt like we were individuals, a little more selfish,” he said. “This year, I feel like we’ve come together as a team. As a defense, we’ve really grown and gotten to where we fly to the ball.”

The team’s Oct. 14 outing, a 24-14 win over Sylvan Hills, matched the team’s best start in school history, tying the 1984 squad that took the first of two state championships. But this year’s Rockets are less concerned with ancient or even recent history than they are about the next team on the schedule.

“You can’t predict 7-0 even if you are a dominant team,” Coach Fogelman said. “We knew we would be better this season. We had some experience coming back, some good players coming on. They had a very good work ethic during the summer. That’s always a promising sign, but there’s a lot of things that’s gotta go right.”

Fogelman said if there’s one thing harder than getting a team to believe it can win, it’s keeping them from thinking they can’t lose. That’s why, he said, the coaching staff and team leadership have worked so hard to mute the volume on all of the attention the team is receiving of late.

“That was something we harped on all summer,” Fogelman said. “Our first game, (7A) North Little Rock, was our only focus and we kept pounding it into them that we could beat them regardless of what anybody else says. That’s tricky, especially these days, with social media and input from outside sources that they hear.

“I think you just gotta block out all that outside stuff and what everybody thinks and do what we know we’re capable of.”

So far, the team has kept both doubters and the hype at bay. No opponent has finished closer than 10 points to Catholic High, which has outscored the competition 223-94 and sits just three wins from an unblemished regular season.

Sanders said he’s sure he’ll look back on this ride and feel good about what the team has accomplished — someday.

“I think about the game that night and then forget about it,” he said. “We have practice on Saturdays and we go break down film from the night before. After we watch that, I put that game behind us.”