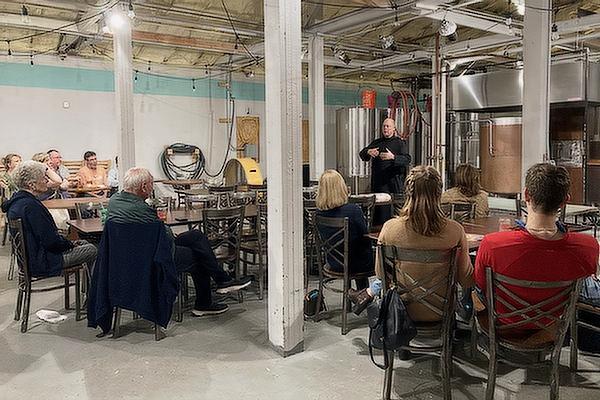 Emily Bannister
Brother Ambrose Fryer, OSB, a monk at Subiaco Abbey, was the special guest speaker at Sacred Heart of Mary Church in Barling’s Pints with a Priest event at Fort Smith Brewing Company in Chaffee Crossing in this undated photo. The night’s event was called “Brews with a Bro.”

Emily Bannister
Brother Ambrose Fryer, OSB, a monk at Subiaco Abbey, was the special guest speaker at Sacred Heart of Mary Church in Barling’s Pints with a Priest event at Fort Smith Brewing Company in Chaffee Crossing in this undated photo. The night’s event was called “Brews with a Bro.”

In 2019, Father Matt Garrison, pastor of Sacred Heart of Mary Church in Barling and Sts. Sabina and Mary Church in Jenny Lind, and Garrett Bannister, then director of faith formation at Sacred Heart, brainstormed on how they could bring the faith to young adults in a more informal setting than the church or the Rite of Christian Initiation of Adults.

Bannister recommended they start a program similar to Theology on Tap, a national program he experienced as a student at the now-closed St. Gregory University in Shawnee, Okla.

The two reached out to the owners of Fort Smith Brewing Company, who agreed to provide them space at the restaurant for free, and “Pints with a Priest” was born.

The hourlong event, which features a religious speaker covering a Catholic topic of their choosing, is held on the third or fourth Thursday evening of the month.

“It's nice to see that priests are people, too. They can have a beer. They can have fun, and they are very wise and have a lot of information to give us. As a young adult myself, I like to have different opportunities to learn about the faith other than in a structured class or something at the church.”

“In the Fort Smith area, we have so many priests close by, the monks at Subiaco Abbey, the sisters at St. Scholastica that have come in to lead the meeting,” Father Garrison said. “We change the name of the event when one of those guests come in, so we’ll have ‘Sips with a Sis,’ ‘Brews with a Bro’ or ‘Sacraments with a Seminarian.’ It's been a lot of fun, and people really looking forward to it every month.”

Father Garrison said the event was an instant hit, initially drawing more than 100 people each time. The COVID-19 pandemic temporarily shut down the meetings, but they have returned and regularly have 50 people from area parishes attend.

“We have quite a few young adults but also a lot of older adults who are interested in learning about their faith, and they may not feel like RICA, or OCIA now, is a place for them,” he said. “It's just a very laid-back environment to learn and to ask questions that they may not feel they have an opportunity to ask in any other forum. People really look forward to it. They want to know the topic, and they invite their friends. It's a great experience.”

Emily Bannister, current director of faith formation at Sacred Heart and Garrett Bannister’s wife, said the events draw a crowd of regulars made up of younger and middle-aged couples who use the talks as a date night, but different speakers bring different crowds.

“We have some recurring priests and monks who come that people have really started to like,” Bannister said. “So, they'll pick and choose which speakers to come to, and they invite their friends. Same with the speakers. They’ll invite their parishioners or their friends. They’ll tell them, ‘I'm going to be speaking on this day,’ so they bring a different crowd than the speaker the month before.

Sometimes the topics that are presented, like exorcisms or purgatory, are the draw.

“It's nice to see that priests are people, too. They can have a beer. They can have fun, and they are very wise and have a lot of information to give us. As a young adult myself, I like to have different opportunities to learn about the faith other than in a structured class or something at the church,” she said. “This is something fun. But it is educational, and you do get to build community with other Catholics. Usually, people stay for 30 minutes or an hour afterward just talking to each other and building community.”

Father Garrison said one of the best things about the gatherings is that it allows religious, clergy and the people in the pews an opportunity to get to know each other. He said Little Rock and Fayetteville used to have Theology on Tap programs, but he thinks Pints with a Priest is the only similar program currently in the state. He recommends other parishes that are looking for alternative young adult faith formation efforts and a tighter-knit community to consider adopting the format.

“Sometimes it’s difficult to be able to get to know the parishioners on a more personal level,” he said. “With this, there's a lot of bang for the buck. It doesn't cost (the church) anything. It's a great way to have a good social event that benefits the community and the parish. It gives time for more human interaction and allows me to say, ‘This is Matt speaking, not just Father Matt.”

Unlike Theology on Tap, Pints with a Priest is open to all ages, including families, because the event is held in a restaurant.

In addition to increasing dialogue among the faithful, Garrison and Bannister said the events are bearing fruit in bringing people to the Church.

“We've had a few people who either started going to OCI (Order of Christian Initiation) or have rediscovered their faith,” Father Garrison said. “They may not have been going to church for a while, and then they come and have a kind of informal introduction back into the Church.”

“Introducing interesting topics often draws in other people who didn’t come specifically for Pints with a Priest,” she said. “People will come in, listen, get involved and stay. We had one non-Catholic who happened to be in the brewery during a talk on exorcisms listen to the whole thing. Now, he's married to a Catholic lady and in RCIA at Sacred Heart of Mary with us. We also have two couples in RCIA who came to us from Pints with a Priest and have lots of good things to say about it.”