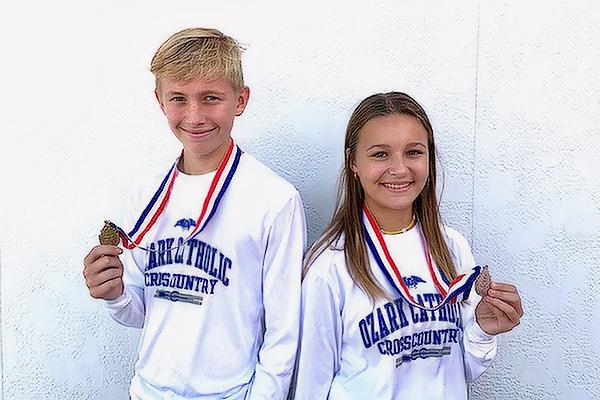 There’s a lot to be said for healthy sibling rivalry, the kind of built-in competitive drive that comes with having an accomplished brother or sister. For evidence of that, one needs look no further than the Pohlmeier household in northwest Arkansas, which is shaping up to be a real hotbed of running talent.

Leading the pack is eldest sibling Isaac, a sophomore at Ozark Catholic Academy in Tontitown. Isaac landed his first individual state gold medal Nov. 3 after placing second last year, finishing in a time of 17:55.67, nearly 20 seconds out in front of the pack. He also paced the Griffins to repeat going away as 1A boys state cross country champions.

Hot on his heels is younger sister Clare, a freshman at OCA, who also placed second in her inaugural state meet in 21:37.42. A phenom since middle school, Clare ran a calculated race that landed her the silver. Where some athletes have difficulty letting go of what might have been, Clare is refreshingly philosophic about her first appearance at state.

“Going into the meet I was supposed to get second,” Clare said. “It was really close, and I was just trying to think, ‘I just need to stick with her and push through that.’ For the first two laps of the course, I was doing well; we were right next to each other and I was a little bit in front of her for some of it but then it was just going back and forth.

Both athletes carry themselves comfortably, answering questions with a maturity and poise that far exceeds their age. Even the more remarkable elements of the season are told in a matter-of-fact manner, giving one an idea of how unshakable they are in the heat of competition.

“When we started halfway through the second lap, she started pulling away and she was just hitting a pace that I knew I would not be able to keep up. So, she pushed that last mile and I said, ‘It’s OK, I still have three more years.’”

Both athletes carry themselves comfortably, answering questions with a maturity and poise that far exceeds their age. Even the more remarkable elements of the season are told in a matter-of-fact manner, giving one an idea of how unshakable they are in the heat of competition.

Like the part about Isaac being so ill the night before the state meet, he wasn’t sure we would be able to compete the next day.

“I did not feel very good. I was running 100 (degree temperature) the night before,” he said as calmly as discussing the chance of rain. “I had my head down on the air conditioning unit in the hotel with my pillow. I was very hot and just had a headache and a stomachache, and I did not feel good.

“But, by the time I got up to the race, my stomach wasn’t hurting as much although I still had a cough and a little bit of a headache. It was a little hard to breathe with my cough.”

“Well, this year we were all sick,” Isaac said nonchalantly. “Only one of our top five runners did not have a fever over 100. It made it sweeter to win, I think, knowing it would be harder and having to run through sickness.”

Clare comes off as similarly laid back about her accomplishments, comfortable with her own abilities and confident in the process of getting better. Even the switch from St. Joseph School in Fayetteville to high school didn’t faze her much.

“The first few workouts, I didn’t know many people. There was one other girl from St. Joseph who transitioned to Ozark, and she did cross country as well,” she said. “Later throughout the season, two more girls who went to St. Joseph in eighth grade ended up joining. So, it wasn’t that difficult.”

The duo, children of Deacon Jason and Erin Pohlmeier, is not immune to teasing one another, throwing about some mild trash talk now and again. But they’re equally quick to say that when the chips are down each looks out for the other.

“Girls usually race before boys, so she’ll come up to me and explain ‘here’s the course, you can do this, you can do that.’ That always helps me,” Isaac said. “Getting to go second also means I know how she placed, and I know I’ve got to get one better. That way I can just put it on her a little bit and joke around.”

“There’s competitiveness, but it’s joking,” Clare said. “I know if he places better, he goes around and makes jokes. It makes it a fun experience and kind of lifts my mood if I think I did badly, because it makes me think I can do better. It helps me put it in a lighter mood.”

Besides, having taken up cross country as cross-training for dance, Clare has a hole card over her brother that both readily acknowledge he can’t trump any time soon.

“He absolutely cannot dance as well as I can,” she said.