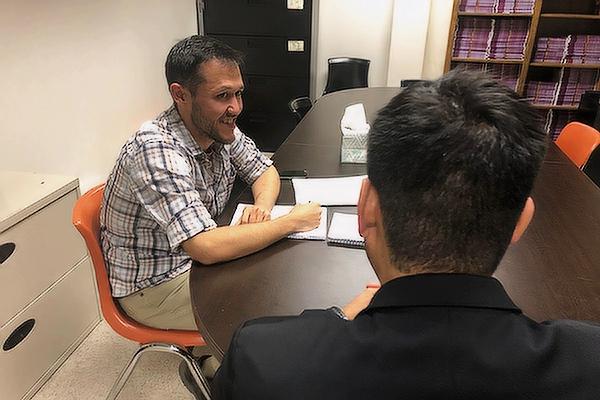 Read more of Arkansas Catholic's coverage of the Afghan refugees who have found a new life in the Natural State:

U.S. military interpreter out of Afghanistan into Arkansas

A little more than a year after they were relocated from Afghanistan to Arkansas, refugees have experienced successes but have many challenges, Catholic Charities of Arkansas’ Refugee Resettlement Office officials said.

One CCA representative has a unique perspective on the past year. Abdull, whose last name is being withheld by Arkansas Catholic to protect his family who remain in Afghanistan, worked as a translator for the U.S. military from 2009 to 2021 and was hired by the Refugee Resettlement Office to serve as a translator for the Afghans who relocated to central Arkansas.

“Everyone is very, very happy. They are so happy to be here and for the reception they’ve received,” Abdull said. “Each family has moved to permanent housing. They have found jobs and have their children in school. They are getting established. We are lucky to be here.”

“We're talking about a country that has been at war, continuously, including to this day, for 40- plus years. Their lives have been difficult. It leaves a mark on people. But Afghans are survivors. There's a commitment to family, to making it even in adverse circumstances. They are resilient and adaptable. They have the spirit that it will take to survive, and we just have to help them. I think a lot of times they don't actually even know how amazing life can be here.”

Dormant for nearly six years, the Refugee Resettlement Office had to jump into overdrive last fall to help Afghans who assisted NATO forces in the 20-year war in Afghanistan escape their country and find safety in the United States.

Since the last U.S. military plane departed Afghanistan Aug. 30, 2021, and the country returned to Taliban control, more than 76,000 Afghans have been admitted to the U.S. Catholic Charities of Arkansas formed refugee sponsor teams to help 88 people transition and assimilate in living in the Little Rock area.

Nearly 200 have resettled in central and northwest Arkansas, but the Refugee Resettlement Office settled 88 people within 100 miles of Little Rock, while Canopy Northwest Arkansas, which is affiliated with Lutheran Immigration and Refugee Services, settled the others around the Fayetteville area. Since then, one family of seven moved to Indiana to be closer to family resettled there, but David Liem, case manager with the Refugee Resettlement Office, said,  “We’ve had six births, and we’re expecting another right after the new year begins. So, we’ll have 88.”

Liem said he feels the past year has been successful overall because people who were in grave danger of being killed in their home country are now safe and able to live and have support without being abandoned.

“The next big hurdle is self-sufficiency,” he said. “It is still very much a process.”

Under Taliban control, anyone who helped allied forces also endangered the lives of their extended families. While some of Arkansas’ Afghan refugees were able to leave with their immediate family members, some, like Abdull, had to leave their families behind with the hope that they can bring them to the United States in the future.

“If there is any sadness, it is for family that was left behind,” said Abdull, who left his wife and six children with his parents, siblings and their spouses and children who all lived in a multi-generational home.

While the initial culture shock was difficult, the refugees are getting more acclimated to western society as time advances.

“It was tough,” he said. “Everything was different — customs, what people wear, everything. And we didn’t have anything when we got here. We left Afghanistan with nothing.”

Without the support of Catholic Charities and groups associated to help, Abdull said the last year would have been impossible.

Liem, an Army veteran who served two tours of duty for about a year in Afghanistan, said those who came from white-collar and urban backgrounds, who had a better understanding of western culture before leaving have had an easier time assimilating compared to those who don’t have a professional background or came from rural areas.

He said there are three main factors challenging their integration into the country: communication, social structures and employment.

“Illiteracy is just common in most of Afghanistan, and it's hard to imagine how difficult it is to navigate the United States with so many things internet-based, like applications for school enrollment for children, managing medical appointments, letters from the benefits office and stuff like that,” Liem said. “So much correspondence is nonverbal, and we just kind of forget how difficult it would be to navigate a day in our lives without literacy. They are very smart people. Literacy really is not an indicator of their intelligence but combined with not knowing English and having to learn it, that's the single biggest thing.”

“The patriarch of the family could earn a living wage for a family of seven or more just working on his own. That’s extremely hard here, and these families are having to figure that out,” he said.

The third barrier has been finding jobs.

“It can be very hard to get jobs in this country without certifications,” Liem said. “A lot of these guys have experience with things like electrical, woodworking or some other sort of trade vocation, so we’re helping them get placed in jobs, getting credentialed or helping them find a career path that gives more than just a basic subsistence,” he said. “That's a big challenge.”

The vast majority of refugees came with only the clothes on their backs and have had to rely on charities and local sponsor teams for clothing, food, medical care, housing, furnishings, transportation and educational and employment opportunities.

“Without the support of these different congregations, we would not be able to do what it is that we’re doing,” Verkamp-Ruthven said.

Liem said the sponsor teams are the same core groups composed of the same people who started them a year ago.

“They’re unbelievable,” he said. “I'm amazed by what they do. They're some of the hardest working people, and they do it for free. I'm struggling to even put into words how great I am for what they do. Without them, there is no resettlement of Afghans. It would not be possible.”

With three languages with several dialects spoken in Afghanistan, securing translators was crucial to Catholic Charities’ success. Verkamp-Ruthven said prayers were answered when they found Abdull, who was flown from Afghanistan to Qatar to an airport in Philadelphia to a military base in New Jersey, where he again worked as a translator. Catholic Charities of Arkansas recruited him to come to the Little Rock area to help other Afghan families who have relocated to central Arkansas communicate with English-speakers.

“He’s been essential to helping us settle other families,” Verkamp-Ruthven said. “It was a major turning point when he arrived.”

While he hasn’t been with his family since August 2021, he talks to them every day and night through social media and smartphone apps. He is working on gaining permanent residence and wants to bring his brother, wife and kids to Arkansas. He said all of the paperwork is completed on the American side, but, unfortunately, Afghanistan is not issuing passports right now, and his family will have to wait to join him.

In addition to serving as CCA’s interpreter, Abdull has a job as a security officer at a Little Rock financial services company.

“Like many others, I have a job, a condo and a car; I’ve made friends, and I’m supporting myself,” he said. “Now I just need my family.”

Liem said the Afghans who helped and sought refuge in the United States should be applauded.

“We're talking about a country that has been at war, continuously, including to this day, for 40- plus years,” he said. “Their lives have been difficult. It leaves a mark on people. But Afghans are survivors. There's a commitment to family, to making it even in adverse circumstances. They are resilient and adaptable. They have the spirit that it will take to survive, and we just have to help them. I think a lot of times they don't actually even know how amazing life can be here.”

“It’s been really impressive what we’ve been able to pull off in such a short amount of time,” she said. “I’m really proud of our entire team, as well as the sponsor teams, and, of course, our Afghan Arkansans.”

CORRECTION: An earlier version of this article incorrectly stated that only two Catholic churches were sponsoring families. This article has been updated.

Read more of Arkansas Catholic's coverage of the Afghan refugees who have found a new life in the Natural State:

U.S. military interpreter out of Afghanistan into Arkansas