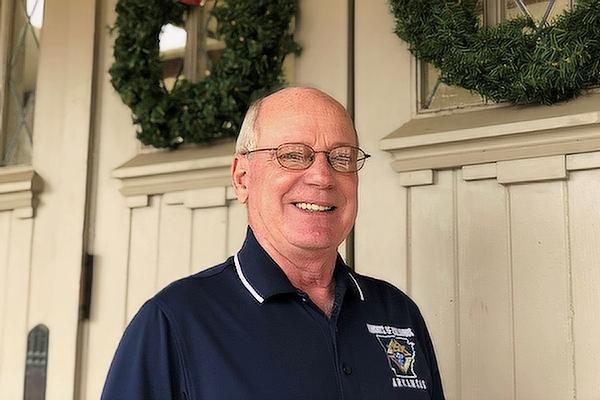 Chris Price
Lloyd Cambre, state deputy of the Knights of Columbus, who oversees 60 active councils across the state with about 7,300 knights, is promoting the organization’s faith formation and charity to draw more interest in the Catholic fraternal organization.

Chris Price
Lloyd Cambre, state deputy of the Knights of Columbus, who oversees 60 active councils across the state with about 7,300 knights, is promoting the organization’s faith formation and charity to draw more interest in the Catholic fraternal organization.

Parish: Our Lady of Fatima

Why you want to know Lloyd: He is the state deputy of the Knights of Columbus, who oversees 60 active councils across the state with about 7,300 knights. Since taking the leadership role, he has actively worked to change the perception in the state. He said he would not have joined the organization had he not moved to Arkansas in 2003, where he learned councils are more than spaghetti dinners, pancake breakfasts, fish fries, card playing and beer drinking. Now, he’s leading the effort to show how the organization is influential in faith formation and the good knights do, including “changing lives and inspiring men.”

God has given me many wonderful gifts throughout my life, including a loving family. In addition, he has given me the skills necessary to work with organizations that change people’s lives. I believe God has given me these talents to assist others. As stated in the Bible in Hebrews 13:16, “And do not forget to do good and share with others, for with such sacrifices God is pleased.”

Where did you grow up?

I grew up in Metairie, La., a suburb of New Orleans. I was one of nine children. We lived in a two-bedroom, one-bath house and went to public schools because that's all that my mom and dad could afford at the time. But we were sent off to church on Sundays. I lived there up until 2003. Entergy needed someone to take over their operations support group in Pine Bluff, so they transferred me up here. I retired as an IT manager/senior project manager in 2018.

How did you get involved in the Knights?

I had been asked many times to join when I was in Louisiana. My misconception of the Knights and their endeavors kept me from joining. When I moved up here to Arkansas, I was asked, and I said no. And then in 2009, at a time when I needed a change in my life, someone said you need Knights of Columbus and that was like a lightbulb that went off my head. I needed something spiritual in my life. I learned more about what they do, and they do so much for charity and other things. If it hadn't been for the move, I wouldn't be sitting here.

Why would you recommend the Knights of Columbus?

It'll make you a better husband, father and Catholic. Working with their faith and action programs is invigorating. I’m on the Tuesday build crew with Habitat for Humanity and get to see firsthand that I can use my talents for these individuals and see them achieve affordable housing where they would never be able to do that before. With Special Olympics events you get the opportunity to see children with intellectual disabilities receive awards that they could never have received in any other venue. That drives you more to do more to try to give back.

That's my pride and joy. My council in Benton was the very first one to place a baby box in service in the state of Arkansas. That was in the fall of 2019. Less than six months later, there was a baby placed in that box. About a month and a half ago, we dedicated the 10th baby box in the state, and I was able to take a picture with that little boy that was surrendered in the first baby box. That just gives me goosebumps, you know, standing there with this child that's two and a half years old and all he wants to do is play on the fire trucks. We have 11 boxes now and have had four babies surrendered in three years.

With Roe overturned, what’s next for the pro-life movement?