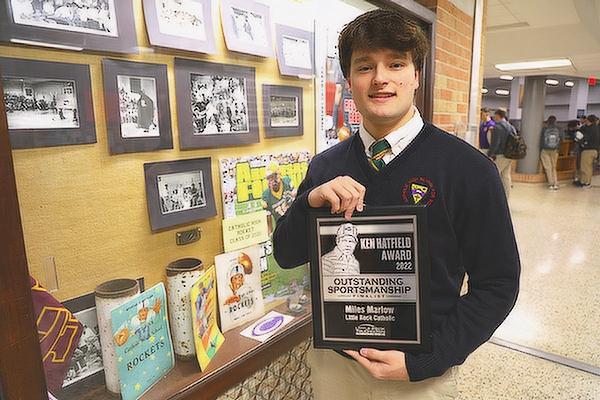 Exiting the Catholic High School locker room recently, Miles Marlow was flagged down by head football coach John Fogelman, asking him to step into his office. Like every teenage boy in the history of high school, Marlow immediately feared the worst.

“I’m like, ‘Oh gosh, am I in trouble? What did I do?’” Marlow said. “Because I definitely did something. I never get called into his office.”

Fogelman delivered the 17-year-old backup linebacker some news the young Rocket could scarcely believe: The football coaching staff had nominated him for the 2022 Ken Hatfield Sportsmanship Award, presented by the Little Rock Touchdown Club. It was an announcement that hit the senior like a lightning bolt.

“I go, ‘Huh? You picked me?’” Marlow said with a big laugh. “He’s like, ‘Yes. We’ve seen the way you act on and off the field. You’re a very humble athlete and we know you don’t play as much as you’d like, but you don’t ever complain.’

Marlow remembers fairly stumbling into the hallway where his pals awaited to see what was left of him after what they assumed was an epic chewing out.

“I leave and I’m walking out, and two of my friends that both play a lot are standing out there and they’re like, ‘You in trouble? What did you do?’” Marlow said. “I go, ‘I just got nominated for an award.’ They were like, huh? I was like, ‘Yeah. Crazy.’”

Taken on paper, Marlow’s incredulity is understandable. Prior to Catholic High, the former Wabbit of Our Lady of the Holy Souls School had never played organized football. In four years in the Rocket program he’d been lightly used, especially over the past three years of varsity play. Thus, he didn’t have many stats or snaps upon which awards are generally based.

But for as little time as he spent between the lines during his high school career, it’s what he did in every other setting that stood out — cheering his teammates and honoring his school.

“Miles was nominated because he is such a good teammate,” Fogelman said. “He did not get a lot of playing time this year, but he was always cheering his teammates on. He was always the first to run out and offer help on scout teams. Miles is also always willing to volunteer and give up his time whenever a group outside of the school needs help.”

“I played a little bit last year, but I’m not a starter by any means,” Marlow said. “But it’s just so cool that all my friends are. I just love being able to hang out with my friends on the field and off the field. No matter, it’s still fun.

“You get to sophomore year and you’re like, ‘Oh wait, I’m a part of this team. I’m a part of varsity, I can help out.’ And that’s what I tried to do; one of my friends was having a terrible game against El Dorado and I’m like, ‘Will you stop being dumb for two minutes and run your plays?’”

The charismatic and quick-witted Marlow received his award at ceremonies held by the Touchdown Club Nov. 14, his extended family in attendance to cheer him on. He posed for photos with former Razorbacks head coach Houston Nutt and high-fived and hugged just about everyone he could reach.

Although the Rockets would lose for the first time all season two weeks later in the state semi-finals, nothing could tarnish his magical senior season.

“It was a huge year this year. I mean, are you kidding me?” Marlow said. “Conference champs all the way to state semi-finals, and we got to play two of our biggest rivals (Little Rock Christian Academy and Pulaski Academy) that all my friends play on? It was a ride. If I wouldn’t have stuck with it this year, I would have been so mad at myself.